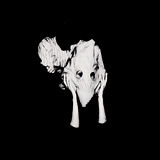 That the term “muscular” can be applied to any release by Sigur Rós reveals a profound shift in their musical lexicon. While undeniably Sigur Rós, their seventh full-length record, Kveikur, sees the band exploring sounds remarkably more aggressive than on previous outings, most notably with opener “Brennisteinn,” which sounds heavily influenced by fellow Icelander Ben Frost. The ambient dream pop part and parcel to Sigur Rós’ sound is pervasive, punctuated now by either the aforementioned grit or, more often, with an almost dance-punk sensibility. Likewise, the band’s signature Hopelandic, a glossolalia language of the band’s own creation, is still used, although without knowing the language, you’d likely remain ignorant to the difference. That they do this at all is indicative of their unstated intent as a band: Music comes first; it is the narrative more than anything else.