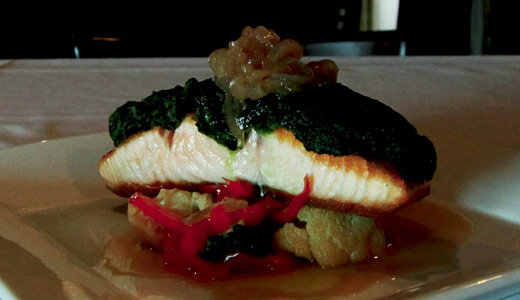 With apologies to Bulwer-Lytton, it really was a dark and stormy night. Rain pounded down. Thunder rolled and lightning flashed — and smartphones throughout the dim room flashed red, pink and green, too, as diners nervously checked the weather radar.

Suddenly a rumbling, clanking roar rang out! It sounded just like a freight train! A tornado? Well, no. It really was the sound of a freight train. This is a thing that just happens when you’re dining out along Frankfort Avenue.

But it really was a hell of a storm; bad enough to keep normal people huddled safe at home, but not sufficiently frightening to keep a hungry, happy crowd from filling the dining room at Bourbons Bistro from stem to stern with fun and noise.

Bourbons is a winner whether you belly up to the bar in the front room or proceed on through to the long dining room at the back. In either setting, you can enjoy sampling from one of the Bourbon City’s most magisterial bourbon lists, choose from well-chosen, fairly priced wine and beer selections, or trust the mixologists to fashion you an intriguing bourbon cocktail from the old school, the new school or some school in-between.

We stuck with the basics and were glad we did. Mary nursed a powerful, fruit-filled Old Fashioned ($9) through dinner, while I made a classic New Orleans Sazerac (rye whiskey, Pernod and bitters, $10) last the meal. Personally, call me a wimp, but I find straight liquor a bit on the warm side to accompany dinner, but mix a well-made cocktail, even on the strong side, and it works every bit as well as a dinner drink for me as the more traditional glass (or glasses) of wine.

Thus fortified, we looked over the menu, which by sheer good fortune had just moved over from the spring bill of fare to the new summer model. Executive chef Jeff Bridges, who took over from longtime chef Michael Crouch when the latter moved down the pike to Bistro 1860 last autumn, has done a fine job of maintaining the style of his predecessor’s menu and wisely retained some of its old favorites while adding his own personal stamp.

The menu is bourbon-inspired and Kentucky-accented, although it would be inane to dismiss it as “Southern,” a careless generalization for our state’s much more complex cultural mix.

About 10 apps and “greens” (salads) start at $7 for a modern variation on the classic “wedge,” summoning whole green romaine leaves to pinch-hit for the iceberg, gussying it up with crispy bacon and tiny tobacco-style onions, halved juicy cherry tomatoes and a creamy mayo-based blue cheese dressing.

At the high end of the starter menu, $13 will bring you a lobster bruschetta, with sweet Maine shellfish, shallots, roasted tomatoes and more antipasto goodies on grilled French bread, or a plate of artisan cheeses and cured meats. Spicy fried oysters ($12) have been a Bistro favorite since the start, and in an era of snout-to-tail cooking, the house-cured, bourbon-glazed Berkshire pork belly ($10) is not to be missed.

Not counting the burgers — which include a Kentucky Creekstone Farm beef burger ($15) or an earthy, juicy patty of ground Maple Leaf Farm duck ($16), plus up-charges of $4 for pork belly or $2 for a fried egg — the 10 summer-menu main courses run from $18 (for the meat-free grilled beets entree) to the steaks at $33 (for a Creekstone beef filet) or $32 (for a grilled skirt steak). All the rest are priced in the $20s, including such goodies as a Maple Leaf Farm duck breast ($25), pan-seared bone-in pork chop ($25) or short rib osso buco ($28).

We started with the aforementioned wedge and a shared appetizer, sautéed garlic and goat cheese ($9), which was rich and sensuous, a hearty starter indeed, a small skillet loaded with warm melted mild chevre bearing a load of diced sweet peppers, pimenton, bitter arugula and earthy, aromatic whole garlic cloves confit, with thin ovals of grilled bread for dipping.

Dessert? Why not? Bread pudding ($8) has been a Bourbons Bistro trademark since the start. Bridges now re-imagines it with a distinct French accent tugging at its New Orleans roots. Built on feather-light brioche and topped with cloud-like meringue, it’s touched with bourbon flavor and accented with a handful of dried cherries. Bon appetit!