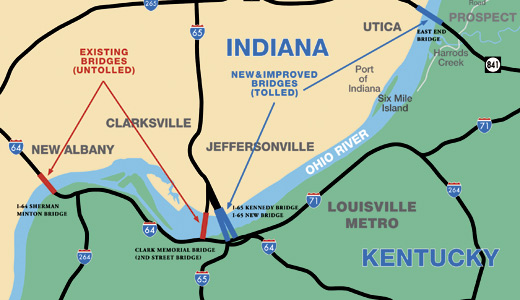 Avery Koler brought white poster board with the handwritten quip, “This sign is more transparent than the Ohio River Bridges Project.” He planned to hold the visual aide up during the second of two public meetings held by the ORBP to discuss proposed tolls and their potential impact on low-income and minority communities. Koler, a Louisville Climate Action Network board member who characterizes the proposed tolls as immoral, was ready to show his support during community leaders’ and concerned citizens’ impassioned pleas for income-based toll considerations.

Instead, Koler found the public forum wasn’t a standard town hall meeting where a protest sign would fit in but an open house, with a looped five-minute video explaining the project and a dozen project officials milling about maps and renderings, answering individual questions. Comments were taken via paper forms and orally via onsite court reporters. Though a press conference was held so local legislators could publicly voice outcry over what they call a regressive tax on the poor, the official meeting was woefully understated, considering how opinionated people are when it comes to transportation issues, especially bridges.

Koler was one of many disappointed at the format and worried that outrage and suggestions regarding tolls and the bridges will fall on deaf ears. “This feels like an attempt to build the impression of inevitability, when it is not inevitable,” he says.

Project officials unsurprisingly feel otherwise, saying they are willing and open to the 150 online comments submitted through kybridges.com and the 250 submitted in person during the two open-house meetings held this month.

The ORBP is one of the country’s largest transportation efforts — and it’s costly. Since the public conversation on tolls began years ago, fervor has centered on not tolling existing bridges that are already paid for. Proposed now is a plan that would toll three of Kentuckiana’s five eventual bridges: a new East End Bridge, which will connect Prospect, Ky., and Utica, Ind., and the I-65 bridges, which will consist of a revamped Kennedy Bridge for southbound traffic and a new Downtown Bridge for northbound traffic.

The Clark Memorial Bridge, better known as the Second Street Bridge, and the Sherman Minton Bridge, which connects west Louisville with New Albany, will remain free.

That undefined standard of “frequent” is a pressing concern for many, says Kentucky Transportation Cabinet spokesman Chuck Wolfe. Numerous residents have raised concerns about how people with atypical schedules will be affected.

“What constitutes a frequent commuter? Not everyone works 8 to 5 Monday through Friday. Some work 12 hours on, 12 off. Some do four 10-hour shifts,” says Wolfe. “Those people are concerned. If the threshold were 40 crossings per month, would they qualify? It’s a valid concern.”

It’s a concern student Misty Trunnell addressed as one of several speakers at the press conference held outside the ORBP’s Kentucky open house. The Louisville resident typically tries to schedule her classes at Ivy Tech Community College in Sellersburg, Ind., on the same weekdays to cut down on gas costs and drive time but wonders if doing so would mean paying a higher toll rate. She calculated her current transportation costs to be 9 percent of her income and says tolls would almost double it to 17 percent. Doable, but barely, on her meager income, which comes from being an assistant to a disabled woman, as well as whatever odd jobs she can fit in between school and being a mother.

“When you’re on a limited income, you know where every dollar is,” Trunnell says. “I’d have to reconfigure everything.”

Officials note that, compared to other tolled bridges past and present, the ORBP proposed tolls are reasonable. The Second Street Bridge opened in 1929 with a 35-cent toll, which is $4.64 in today’s dollars.

Still, even at the lowest rate of $1 per crossing, a commuter could pay upwards of $500 annually in tolls. For a minimum-wage earner, that’s equivalent to 70 hours of work. The comparison was made by nine Kentucky legislators in an open letter to Gov. Steve Beshear, asking him to support House Bill 129, which would give an annual reimbursement of up to $500 a year in toll-related work costs to anyone eligible for the federal Earned Income Tax Credit.

HB 129 would also exempt TARC buses from tolls. TARC buses cross the bridges 946 times per week during their fixed routes. Additionally, TARC3, the paratransit service available for people with disabilities, crosses the bridge 140 times every weekday. Making these vehicles pay $10 per crossing would strain an already stretched public transportation system and could result in higher fares for riders, which would disproportionately affect low-income and minority communities.

A 2009 TARC survey found 47 percent of riders had an annual household income of less than $20,000 and 24 percent were between $20,000 and $39,999. The same survey found that 59 percent of riders were African-American. Although comparable survey data from 2013 has yet to be analyzed, TARC Marketing Director Kay Stewart says nothing indicates significant change in those ridership statistics.

Stewart says she is “cautiously optimistic” TARC will be exempt from tolls. Earlier this month, the board of directors overseeing TARC approved a resolution seeking exemption from the bridge tolls.

The states have dedicated $20 million toward improving TARC routes and awareness. It’s one of many components meant to lesson the impact on the low-income community. Others include offering low-cost transponders, allowing low minimum balances on transponder accounts, and making replenishing those accounts easy and accessible.

A six-person bi-state committee will ultimately make decisions on tolls, which are supposed to go into effect in 2016. That means, open houses aside, there’s still time.

“I don’t think it’s fair or reasonable to instill tolls on the working poor,” said Sen. Gerald Neal (D) at the press conference against tolls for the low-income community. “I’m calling on state officials to not write in stone these tolls. Take this issue seriously.”