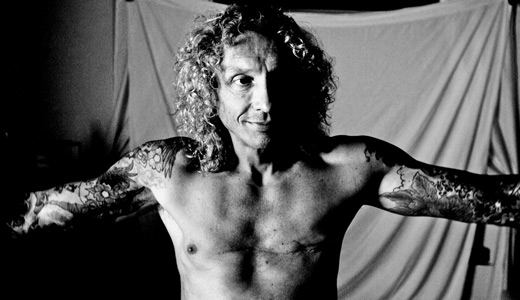 For at least a solid 20 minutes into “How to Make Money Selling Drugs,” I thought I had found my next career path. How hard could it be to sell an ounce of weed or a baggie of coke to my friends? I could be a millionaire in a year! Or, if I did it right and was smart, in a month! These guys did it. Why can’t I?

And then I thought about how nervous I get jaywalking or going more than 10 over the speed limit, and how hot and sunburned I’d get standing at the corner of Grinstead and Bardstown Road — and reconsidered. Of course, a little deeper into Matthew Cooke’s entertaining documentary on how a street dealer can rise to cartel lord with relative ease, all the consequences of making fast cash by selling drugs were splattered across the screen. Prison time is the least of your worries.

“HTMMSD” successfully blends the cold, hard facts with edgy and humorous narration (by Cooke) and graphics. Presented in video game-like format, all the bells, whistles and old-school Atari sounds and images move the viewer through the various levels from street dealer to cartel lord. And included throughout are candid interviews with former dealers like Bobby Carlton, Pepe, 50 Cent, John E. Harriel Jr., Brian O’Dea and “Freeway” Rick Ross.

The film opens up like a parody of a used-car commercial or bad movie trailer: “Are you unemployed or stuck in a dead-end job? Are you homeless or living in a bad neighborhood? If the American Dream broke its promise to you, don’t worry. We have an answer. Welcome to the game. This is your guidebook. Our experts are going to give you everything you need. You can make $1,000 an hour, you can have a six-figure starting salary, you can make $1 million in a week. In this program, masters of the trade are going to reveal their secrets in how to get paid.”

As the “experts” relay their stories — both bad and good — on what it was like making $50,000 in two hours, or carrying around a rock of coke the size of a softball, or getting busted by undercover agents, or getting stabbed through the chest, it’s easy to relate to their desire to fulfill the American Dream, even if that means bending the law or risking your life.

The film ends with a frank examination of the “war on drugs” that escalated with Nancy Reagan’s “Just Say No” campaign in the ’80s. Most agree the system is corrupt, yet the government funding continues to increase, making it lucrative for police forces around the country to make drug busts.

“‘Just Say No’ is sort of a fraud,” explains David Simon, creator of HBO’s “The Wire.” “It was one America talking to the other and not even knowing how the other half has to live. … We had not given even the slightest bit of thought as to what people in these worlds were supposed to say yes to.”