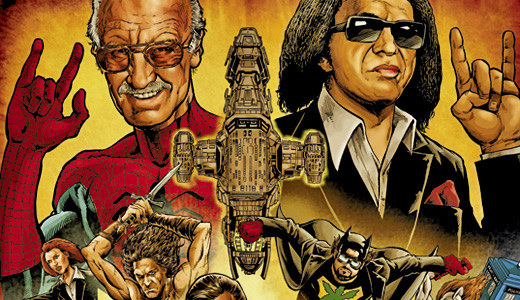 There was a time when the term nerd was pejorative, something to be ashamed of or to publicly deny. Those days are over as the geeks have inherited the Earth, evidenced by not only the technological boom of the previous decade but also the plethora of successful comic book/sci-fi entertainment.

Louisville has two festivals that celebrate nerds and nerd culture. The annual Derby City Comic Con was held in June, and this weekend it’s the ninth annual FandomFest, a celebration of pop culture that began as a single-genre convention but now includes comics, science fiction, horror, film, gaming, anime, cosplay and celebrity panels. “It was originally a genre film festival,” explains executive producer Ken Daniels. “As the founder had a passion for all genres of fandom, he started to add more each year until it ballooned into one of the largest events in the region of its type.”

Given this evolution over the years, what exactly can one expect from an all-encompassing event? Daniels says the weekend is chock-full of activities ranging from anime raves, more than 12,000 square feet of video gaming, costume contests, seminars about breaking into Hollywood and meet-and-greets with celebrities and comic-book artists, as well as a full slate of movies, including the Fright Night Film Fest.

Daniels is proud of the reputation FandomFest has built up over the years. “This is what helps us with landing the stellar lineups we have. We pretty much landed everybody we wanted this year.”

One odd standout from the list above is Gene Simmons — someone you’d expect to be the opposite of a “nerd,” right? Wrong. “Gene Simmons will be here because of his love of comics,” Daniels says. “He says comics made him who he is today and helped him to achieve the success he has. He publishes comics through his company, as well.” Simmons will host the closing seminar on how comics made him who he is as a success.

Podcasts will also play a part in the form of “Nerdosphere,” an extension of the festival that seeks not only to promote the con, but also to give geeks and nerds a platform to talk and discuss what’s important to them. Effectively, then, FandomFest will be tweeted and podcasted for its duration, making it as fully interactive as possible.