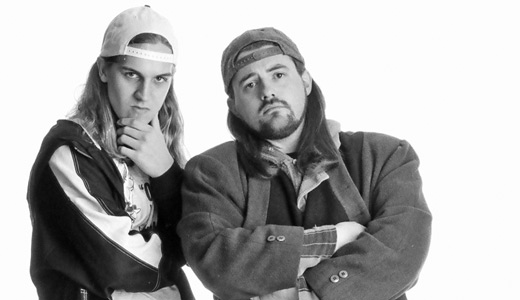 Jason Mewes was just 13 when he met Kevin Smith and only 17 when he was cast in Smith’s 1994 indie film, “Clerks.” That film would, of course, become a cult classic and spawn several sequels, prequels and spin-off films such as “Chasing Amy,” “Mall Rats” and “Clerks II,” which featured the odd couple who spent their lives selling marijuana in front of a convenience store.

Tonight as a kickoff to FandomFest, Mewes and Smith will present a screening of “Jay and Silent Bob’s Super Groovy Cartoon Movie,” which Mewes produced and for which he reprises his role as the blunt, often foul-mouthed Jay.

It was a role, Mewes tells LEO, he was truly born to play — because Smith basically based the character on Mewes’ personality.

“In the beginning, he was four years older, and I was making stupid decisions,” Mewes says during a telephone interview. “He was bailing me out, giving me money. He was the big brother.”

Through the experience, the two clicked not just as friends but as creative partners, and Jay and Silent Bob — played by Smith and so-named because he rarely speaks — became favorites to legions of Gen Xers.

The new film, directed by animator and first-time filmmaker Steve Stark, is based on a graphic novel series that initially was part of the film “Chasing Amy.” In the animated universe, Jay and Silent Bob win the lottery and decide to become superheroes.

“They want to clean up their town,” Mewes says, “and they end up (accidentally) creating super-villains.”

The heroes, Bluntman and Chronic, end up taking on The League of Shitters in a battle to save their New Jersey suburb. Pot references and dick jokes ensue.

Following the screening will be a Q&A with Mewes and Smith; such Q&As are common as they cross the country promoting their podcast on SModcast Internet Radio.

As to the enduring popularity of Jay and Silent Bob, Mewes says, “I think it’s because people can relate to Jay. People come up to me and say, ‘I have a friend just like Jay!’”

They also relate to the ongoing friendship between the two; Mewes refers to the characters as “hetero life mates.”

He also says they’ve matured as people; Smith spun the podcast into a cable series called “Comic Book Men” and has continued to direct and produce. Mewes, who is three years sober after undergoing rehab, now has other producing projects, and has acted in a number of films.

However, asked what Jay and Silent Bob would do for a living if they ever went sober, Mewes doesn’t hesitate.