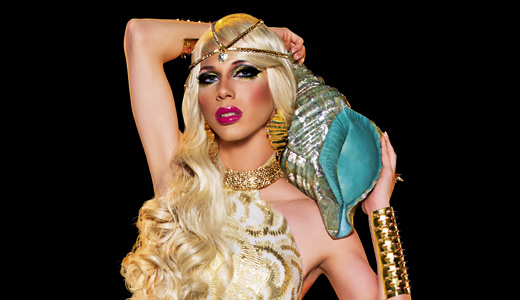 Cute and bubbly Jade Jolie got off to a decent start as a contestant on the reality competition series “RuPaul’s Drag Race”’s recent fifth season, but the pressure soon caught up, leading to her elimination halfway through the season. The Gainesville, Fla., native known to the government as Josh Green also became scandalized when past work as an adult film actor (called Tristan Everhard — also a good drag name!) emerged once she entered the spotlight.

The drag queen says, “My style has always reflected my personality, giving you a taste of the crazy rainbow.” She took her stage name from a combination of the “Mortal Kombat” character Jade (“the character who would always give me life with her monstrous tatas and great physique”) and a movie star (“who, in my opinion, is the queen of queens”).

Jade Jolie headlines this month’s edition of the LGBT party “Hard Candy.” VIP tickets include a meet-and-greet, photo and specialty cocktail at 9 p.m.

LEO: What do you do at your live appearances?
Jade Jolie: Clearly, from my final episode of “Drag Race,” I’m not a live singer (laughs). I don’t wanna scare anyone, and I enjoy having people in the audience for my shows, so lip-syncing is a must. I serve the children with high, fun energy and crazy costumes. Drag, to me, should hold your attention and be a blast, so I do my best to make things visually exciting and entertaining as possible.

LEO: Which version of RuPaul do you prefer, the “Tim Gunn” version or the “Covergirl” version?
JJ: I’ll take any version! She is one fierce muthatucka.

LEO: Did you make it all the way through that movie Angelina made with Johnny Depp?
JJ: I feel like a terrible fan saying no — but it’s a no (laughs). Some of my all-time faves from her is in “Original Sin,” “Tomb Raider” and “Gia” … oh, and she was a clearly a goddess in “Alexander.”

LEO: What is your biggest goal?
JJ: To be a queen to be remembered.

LEO: How do you feel about the recent Supreme Court decision about marriage equality?
JJ: I know to some it seems like a small step, but to me, I am overjoyed. I feel you have to celebrate each and every victory, and equality is like rainbows — beautiful and free, hunty!

LEO: What do rainbows and unicorns add to your life?
JJ: Everything! Seriously, though, who doesn’t love a damn unicorn and rainbow? They make me smile and definitely add some more pizzazz in my life. I love to tell people, “Don’t think it’s only rainbows, because if you mess with the unicorn, sometimes you get the horn!”