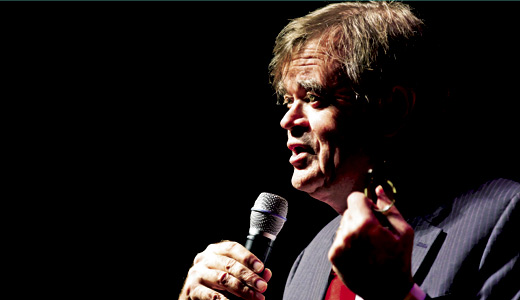 Since 1974, Garrison Keillor has reported the news from Lake Wobegon, a fictional Minnesota town “where all the women are strong, all the men are good-looking, and all the children are above average,” to more than 4 million listeners around the globe as the host of NPR’s “A Prairie Home Companion.” The writer/comedian brings his mellifluous baritone and signature Midwestern humor to the Iroquois Amphitheater on Saturday, with co-stars Aoife O’Donovan, Fred Newman, Rich Dworsky and The Guy’s All-Star Shoe Band. LEO called up Keillor to talk music, horse sex and keeping it real after four decades.

LEO: You’ve been to Louisville several times, most recently in 2011. What do you think of the city?
Garrison Keillor: Well, the most recent time I remember clearly, because there were some people at the show who invited me to a party at which horses were being put to stud. It was going to be on a Sunday morning, a bunch of well-heeled people standing around, drinking bloody marys and watching horses copulating. I turned down the invitation.

LEO: Why is this tour called “Radio Romance”?
GK: Well, the backbone of the show is from the radio show, “Prairie Home Companion.” There’s a tall, gloomy-looking man, me. And there’s some improvised stories with me and our sound-effects man, Fred Newman. That’s a radio thing: two guys standing on stage with a microphone. You get a humpback whale singing Barry Manilow, a Parisian taxicab and a 1949 Chrysler going around a corner with a bad transmission. That’s a radio deal.

The high point of the show for me is getting to sing duets with Aoife O’Donovan. I think music is the romance of life. The whole history of our lives is carried in music; it’s part of our DNA, part of our memory, so when you sing the songs that were your songs through all the different stages of your life, it comes back to you.

LEO: Your website calls the show “two hours of duet singing, absurd improv with sound effects, Guy Noir Private Eye, poetry, outright foolishness, and the News from Lake Wobegon.” What can we expect from the “outright foolishness” portion of the evening?
GK: Well, the foolishness is when Fred and I get out on stage, and we might do my poem “Fatherhood.” It’s a simple poem, of biology, about the nature of sperm. And Fred portrays human sperm just beautifully, audibly; you can almost see them, 40 million of them at a time, making their odyssey. That’s a piece of foolishness.

LEO: You’ve been hosting “A Prairie Home Companion” for 39 years. What do you think has changed since you started?
GK: Well, I think the show’s gotten a great deal better. It’s lost almost all of that early self-consciousness it had, and it’s, I think, become richer and more generous to the audience. When you’ve done it that long, you don’t brace yourself before you do a show. You simply walk out there. Without a thought in your head. And you do it. You’re happy out on stage; you feel this connection to the audience, and you start inventing like crazy. And you have a good time.

A person is very lucky who can do something so long as this. To come up toward your 40th anniversary doing one show is miraculous good luck, really, and not the result of good character or good work habits or talent. Talent is the least of it.

LEO: Do you have anything special planned for the 40th anniversary?
GK: I don’t like to celebrate anniversaries. I’m a Midwesterner; we don’t go in for that sort of making speeches, presenting awards, blah blah blah.

If you start down that road, some fool is going to stand up and give a speech about how wonderful you are, and he’s going to praise you for all the wrong things, and it’ll be clear in the midst of his speech that he didn’t really listen to the show, and this is just all boilerplate spun out of cotton candy, and there’s nothing worse. There are a few people in the world, for you or for me or for anyone else, whose good opinion means so much to us. If they say something is good that you did, then it means the world to you. Or at least South America.

So I don’t know what we’ll do, if anything. I think I’ll just get on a ship and sail to Stockholm or something.