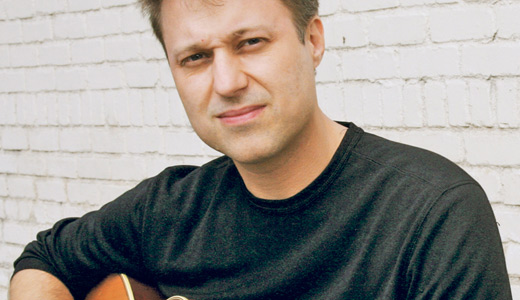 It’s hard to say what you’re going to get from Henry Phillips’ show. Is it a concert? Is it stand-up? Is it something in between? My money is on the latter, but you never really know when it comes to this kind of show. Phillips has also proven himself with the critical acclaim of his debut film, “Punching the Clown,” and the success of his dryer-than-dry web series “Henry’s Kitchen.” He has appeared on “Jimmy Kimmel Live,” “Comedy Central Presents” and “The Bob & Tom Show.” This weekend, Phillips comes back to Louisville to perform at Comedy Caravan. “I can’t wait to get back to Louisville,” he says.

LEO: After being on the road, you pretty much hit everywhere at least once, I would guess.
Henry Phillips: Yeah, but Louisville has always been a good time. The first time I was there was, like, 12 years ago or something like that, at Comedy Caravan.

LEO: Do all the cities start to look the same after a while?
HP: Not really … but some of them do. When you’re doing a club week, though, it’s different — you get out, you walk around the city and see more of it. But I’ve done tours where we were in theaters, and you’re just doing one-nighters; you do one city, get on a bus and the next day you’re in another city. Those all look the same, because all you’re looking at is the parking lot behind some theater. Doing a weekend in a comedy club, you definitely get to see the uniqueness of where you’re at more.

LEO: Music has been part of your act from the beginning. Did you feel resistance earlier on from more “conventional” stand-up comics, you being “The Guy with the Guitar”?
HP: Yeah, for sure. You get a lot of guys who think you’re using it as a prop. But somehow or another, I was able to escape a lot of that judgment. I think it’s because I didn’t come in as a comedian playing three-chord songs to spice up my act. I came in as a songwriter, and people were like, “OK, I get that, what he’s doing is real.” Over the years, people have taken to things like “Flight of the Concords” and Tenacious D — there’s not that stigma as much anymore. Whether it’s music, impressionists or mimes, it doesn’t matter to me. As long as it’s good, it’s good.

LEO: What’s harder for you to write, funny songs or the jokes for the stand-up portion of your show?
HP: I think a song is harder. Because not only do you have to get all of the laughs in it like you do a joke, but it also has to be creative musically. Jokes can pop up in the course of conversations — writing a song is a little more of a process.

LEO: With your web series “Henry’s Kitchen” and Paula Deen’s current troubles, what are the chances of seeing you on the Food Network next?
HP: I know! I’m kinda racist, so maybe this can be my moment.

LEO: “Punching the Clown” was a resounding success. Have you thought about doing another movie?
HP: I’d love to, you know? It was a success in terms of everyone liking it, but it wasn’t a financial success by any means. In order to do another one, someone would have to pay for it … but what I think is more likely is to turn “Punching the Clown” into a TV series. I think we’re closer to doing that than another movie.

LEO: In the time of Kickstarter and Internet funding, don’t you think you could make a new feature film happen?
HP: That’s not a bad idea. I haven’t ever really looked into that. It would probably be really tough to pull off, but you never know. We did that first one for $125,000 — which is dirt cheap for a feature-length film — so if we could get the money together, I’m sure we could do a sequel.

LEO: Which is your passion, comedy or music?
HP: I always say comedy … but it’s hard to explain. I just think, what a good way to live, making each other laugh.