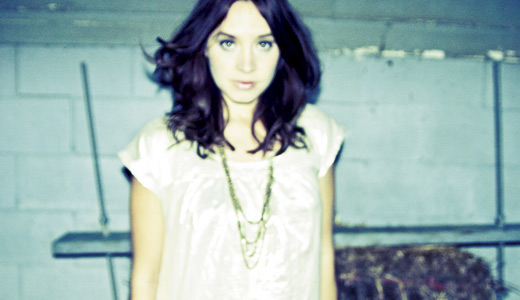 To become a professional musician, Cheyenne Mize had to give up the idea that time still moves at the same speed it does for other people. In this version of reality, a drive from Alaska to Michigan between shows is a day at the office. An album primarily recorded in December 2011 can become a new release in June 2013.

So it goes for Ms. Mize, whose second full-length album, Among the Grey, was released last week, with a hometown release show scheduled for Saturday. Having waited this long, her band (including Mize on vocals and guitar, keyboards, percussion and/or violin, plus guitarist Drew English, bassist/percussionist Emily Hagihara, and drummer JC Denison) has prepared a special evening of music, dance and food.

One day last week included a LEO interview, rehearsing for an upcoming tour with another band she plays with (Bonnie “Prince” Billy), working as a music therapist and DJing in an online chat room to promote her album. It’s a very modern approach to making it in the business. “I do like the change of pace that keeps me from getting burnt out on any one thing,” she says.

Mize is glad to be able to share these songs — songs her band has been playing for almost two years — in recorded form, in part because the long release process has tied up her ability to write new songs.

Her first exposure to fans outside of Louisville came with 2009’s Among the Gold, an EP of duets between her and BPB boss Will Oldham. Mize has played in his band on and off for several years, and says she’s excited to go back out on tour with his band now — especially as her own album is becoming available.

“It’s a lot less stress — traveling with him rather than playing my own tour. It’s awesome just to get in the van and go where people tell me to,” she laughs. “Not having to worry if people show up … His shows are always very fun and successful.”

She has a good attitude about the fact that her offers to open his shows with her band have not yet been greenlit. “I have been given a lot of opportunities through Will, even being able to get my music out to a wider audience because they associate my name with him. I certainly would never want to take advantage of that relationship.”

Fans attending his shows will be able to buy her album at the merch table. They will play in Louisville on Aug. 4 at the Kentucky Center’s Bomhard Theater.

Mize has led a stable band of her own for a few years now and looks forward to their summer shows, especially as Denison and Hagihara live in other cities. “If something great happens, if we get some great support tour or something like that, I definitely will be excited to just be playing with those folks. They’re a huge part of what this record sounds like,” she says. “If we were able to get together once or twice a week, there’s not a limit to what we would be able to do.”

The album was recorded by Kevin Ratterman in an old church building. There, the other three added details to their respective parts, while guests, such as the other members of another Mize group, Maiden Radio, and erstwhile tourmate Ben Sollee joined in.

The album was originally scheduled for late summer 2012, but most of the post-recording technical aspects — mixing, mastering, pressing — would have been rushed. “Also, there were some things we didn’t get to finish, and even though I was happy at the time with where the record was, I thought there were a couple things we could do to make it better,” Mize says.

Among the songs added: the first single, “Among the Grey,” re-recorded in Lexington with Duane Lundy, a song that otherwise would not have made the album with that name. “Obviously, that has colored the experience greatly,” she says.

Her first album, 2010’s Before Lately, consisted of songs recorded to see what the experience would be like. She liked it. Now, “This is the first time I’ve really been able to think of a whole project as an album, one cohesive thing.”