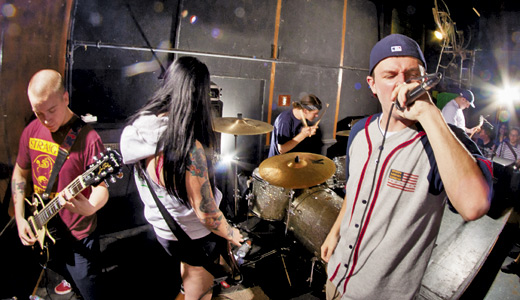 Since the spring of 2010, Louisville hardcore punks Written Off have been unflinchingly honest, making their name by playing the type of music they want, how they want it.

But Written Off aren’t all serious. On the one-sheet for their impending 7-inch record, they lampoon the state of Louisville music, decrying the city as having “devolved from a thriving cultural ’core center into a drunken repository of folk punx, aspiring indie rappers and beard crust-charge acolytes who’d traded their edge chips for goth fatties and butt-less pleather chaps …”

Guitarist Scott Holston explains both the joke and their approach to music, noting, “That’s just an exaggerated and humorous take on the lack of a viable hardcore scene a few years ago. There were a lot of things going on under the guise of ‘Louisville Hardcore,’ but most of it wasn’t hardcore. We’re not all hardcore, all the time Neanderthals by any means, and I love how diverse Louisville’s music scene is, but I can’t pretend like we weren’t itching for something a little more pure.”

Holston continues, “We’re into all types of hardcore, but when we decided to do a fun straight-edge band, this is what came out.”

Of their ideal show, Holston remarks, “I don’t know about a dream show or anything like that, but the show with us, Out Crowd, Damaged Goods, Another Mistake, Enough, and Kicked In at (the) Chestnut (House) was about as ideal as it gets to me. Everybody had a blast.”

If anything, Written Off is bound by their utilitarian and no-nonsense approach to music, which informs their ability to appreciate the moment. Holston says, “I think the Louisville scenes of yesteryear are perfect examples of self-sufficiency and hard work. People take for granted how easy it is to tour and release music, and it shows. I guarantee if half of the bands had to start labels and make phone calls for people to hear or see them, things would be very different.”