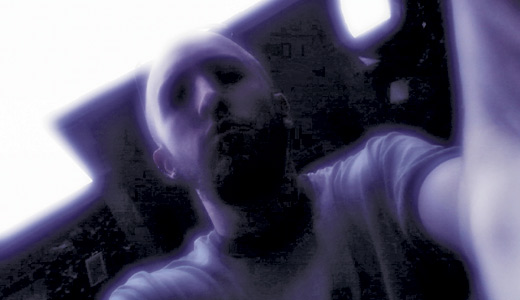 “I’ve been called ballsy for a lot of what I sample,” says Alex Koenig, the man behind Nmesh (that’s a silent N), when I ask him to elaborate on his uncanny style of electronic music. “I’m doing it a lot more blatantly now, because I can get away with it. Everything is up for grabs. That’s the nice thing about vaporwave — there are no restrictions.”

Vaporwave is a genre of sample-based music built primarily around the idea of taking all of the music you hate the most — Muzak, ’80s soft rock classics, smooth jazz — and repurposing it for mutated sound collages that could reasonably function as soundtracks to modern society peering into the unforgiving abyss of its own uselessness.

That seems to be the case for many of the genre’s early adopters, anyway, such as James Ferraro, INTERNET CLUB, and ?????VIRTUAL (note the intentionally alienating Japanese characters — a hallmark of the scene).

But for Koenig, nostalgia — that is to say, looking back fondly on the 20th century’s cultural garbage dump — is crucial to the process. It’s also what has established him as a key player in this Internet micro-genre, though he’s been operating under the name Nmesh since 2002.

“I’m exploring my childhood. Everything I liked when I was young, I get to bring it back and just get really crazy with it. For me, it’s simple: It’s about having fun with audio.”

That ethos of sound experimentation for its own sake is what makes the playful, psychedelic Nu.wav Hallucinations such an exciting listen. Though already widely circulated online earlier this year (and garnering hefty praise from tastemakers like Tiny Mix Tapes), the album will see a cassette release soon via the Prague-based label AMDISCS.

But ever the restless creator, Koenig is already busy at work on his next big statement. “It’s called Dream Sequins,” he says with a smile, pausing to make sure I catch the wordplay. “It’s going to be a lot more far-out than the last one. The lo-fi stuff is way more lo-fi; the psychedelic stuff is waaay more psychedelic. I’m going for extremes.”