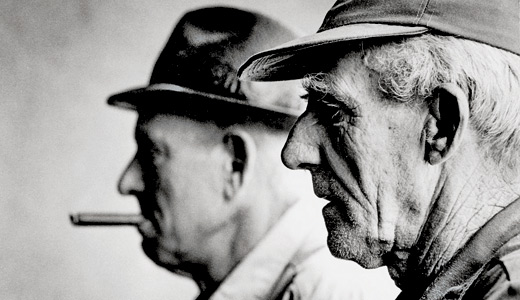 For a small town, Corydon, Ind., certainly seems to have produced an inordinate amount of excellent photographers — and every one of them found their way into Davidson’s Pool Room. They showed up not to shoot a few racks of nine-ball, or take on the straight-pool sharks, but to capture images of a one-of-a-kind place, and a seldom-seen slice of Americana.

The pool room was narrow, but 99-feet long, stretching through a block of downtown Corydon from Chestnut to Beaver streets. Like the other stores in the block, it had entrances on both streets, with big plate glass windows. That allowed two sets of daylight to pour into the natural gloom of the long room. It was that special light that created the pool hall’s stark shadows and grainy shadings — and drew photographers like moths.

The old pool room is gone now, but a photography exhibition showing on weekends through Aug. 25 at the Artisan Center gallery in downtown Corydon recreates the scene as recorded through the lenses of three of Corydon’s finest photographers: Larry Ordner, Randy West and Bryan Moss.

“All three of them shot the pool room in about the same period, the 1970s, and many of their subjects are similar,” notes the show’s curator Larry Morgan. “But if you stand back and look at their work in groupings, they each have their own look, each different from the others. That’s their artistry.”

As in other towns, Corydon’s pool room was one of those places that was for grown men — and just a little taboo. Parents might not forbid a kid to go in the place, but they certainly hoped you wouldn’t.

“My first time in the pool room, I was just a kid,” recalls Ordner. “A neighbor, Elmer Rosenbarger, gave me a quarter and sent me on an errand to the pool room to get him a chaw of tobacco. I was a little scared about it. He said, ‘Just tell them it’s for Elmer, and they’ll know what to give you.’”

“And they did,” says Ordner. “They cut it like a brownie. A little square cake of tobacco. Disgusting brown color. Awful-looking stuff.”

Later, Ordner shot the pool room for a journalism class at Indiana University. He broke in as a photographer with the Ft. Wayne Journal Gazette, and later became an aide to U.S. Sen. Richard Lugar.

One of Ordner’s shots captures the pool room full of its regulars, most seated along the walls, being themselves. Incandescent light floods a table. A fan overhead moves the smoke along.

West, the former editor of The Corydon Democrat, the Old Capitol’s acclaimed weekly, concentrates on the denizens of the den. One shot focuses on a young guy — just a teenager it looks like — with decorative patches sewn into his jeans. He’s got an optimistic look on his face, sitting with a pool cue in his fingertips, probably plotting how he’ll run the table when his turn comes. It’s a neat shot of a person, rather than a pool-room stereotype.

A favorite subject for all was Anderson Perry, the African-American shoeshine man, who manned his stand in the south window for more than 40 years. All the photographers shot Perry, usually backlit by the sunlight streaming through the glass. And every one of them came away with a terrific shot — including Moss, one of several Corydonians who shot for The Courier-Journal in its photojournalism heyday. Moss later was with the San Francisco Chronicle.

In one of Moss’ images, we see Perry applying polish with his fingers. He always did it like that, with his fingertips, rubbing wax into leather the old, old-fashioned way.

Just for fun, the show includes one of the pool room’s tables, a vintage Brunswick that dates from about 1920. Modern pool tables have round holes cut in the slate for pockets. This one’s pockets are diagonal cut. A fellow looks at one of those wedge-shaped holes and wonders if that makes a close shot more difficult, or a natural drop pocket. The good shooters would have known.

Nearby is a brass cuspidor. But no spitting, please — unless you’re working on one of those quarter cakes, and learned your aim from Mr. Rosenbarger.