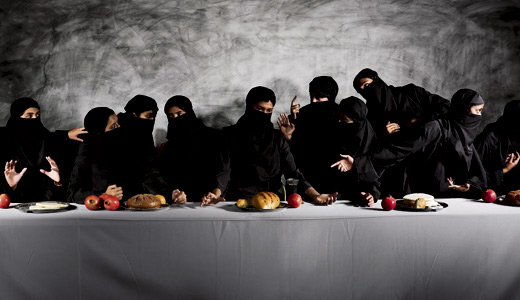 Eleven years, nine months and three days. That’s how long the United States has been at war, ever since George W. Bush declared a war on terror in October 2001. From TV and movies to video games and the media, we are surrounded by images of war, a global assault numbing in its sheer volume and omnipresence.

In its latest exhibit, “Aftermath: Witnessing War, Countenancing Compassion,” 21c examines what it terms “the global pervasiveness of violence, which has engendered the normalization of shock and numb.” With works by artists from four continents, ranging from textile and mixed media to photography, video and oil painting, the exhibit addresses “the wages of conflict, the unseen spectrum of loss … (and) our basic, at times banal, shared humanity.”

On entering the exhibit, one is immediately struck by Steve Mumford’s “Empire,” his larger-than-life soldiers ushering shackled and blindfolded prisoners, clad in vivid orange, onto a plane under a patch of inky sky. The indifference of the soldiers, juxtaposed against the nervous whispering and prayer-clasped hands of the cowering prisoners, offers just the first example of the thought-provoking and unsettling work included in “Aftermath.”

Not to be overlooked as you enter the Atrium Gallery is Jeremy Dean’s “Destiny,” a mixed-media piece examining manifest destiny and cultural myopia. An American flag, stripped to translucent threads, stretches across a map of the world, the diptych calling into question the egocentrism of empire and the dilemma of cultural bias.

Other standouts from the show include Al Farrow’s “Study for a Mosque Reliquary” and “Menorah VI,” Travis Somerville’s “In America We Trusted” and Carlos Aires’ “Face to Face with Death II.” All four works are multi-layered; the media themselves — bullets, Depression-era moneybags and vinyl records — say as much about hegemonic prejudice, cultural lenses for trauma and the real victims of war as the composition of each piece.

The show includes some excellent works of photography, in particular Tim Hetherington’s portraits of U.S. soldiers in Afghanistan, writhing in sleep and flexing with outrage; Mikhael Subotzky’s panoramic series documenting life in the overcrowded prisons of South Africa; and British-Nigerian artist Yinka Shonibare M.B.E.’s “The Sleep of Reason Produces Monsters.”

Also worth mentioning is Jane Hammond’s delicate “All Souls,” a mass of paper butterflies exploding from a map of central Europe. Their fragile wings, fluttering over the ominous names of German and Polish towns, call to mind the release of souls during the mass genocide of the Holocaust, the millions of eyes who would never see another butterfly. Yet Hammond, who the wall label says “embeds details in layers of elegiac imagery,” offers a rare glimpse of hope, as her piece offers layers of reincarnation, new life and the butterfly effect of deeds — both of war and of kindness.

This exhibit is not for the passive. As the curator’s note warns us, “The art in ‘Aftermath’ argues for public engagement, imploring us to witness, to connect, to act, and to heal.” These pieces are not meant for thoughtless observation; they unsettle the viewer, forcing one to engage in a dialogue about the role of violence in our culture and the societal biases that inform our decisions as nations and individuals.

Tucked away in Gallery 4, don’t miss the intimate, delightful and engaging “Lost Suppers.” Using meals — their preparation, consumption and destruction — as a subject lens, in just five pieces “Lost Suppers” ranges from environmentalism and religion to fantasy, history and mortality, an eclectic collection of works in various media united by their culinary focus.

The standout here is Vivek Vilasini’s “Last Supper — Gaza,” a photographic recreation of Leonardo da Vinci’s fresco. In this incarnation of the famous Renaissance work, Jesus and his disciples are replaced by women in hijabs. The sparse composition and somber palate — grey table, black robes, monochrome backdrop — alludes to the hardships faced by modern-day Palestinians living in Gaza. Even the food served at this modern last supper, consisting primarily of pomegranates and bread, reflects the limited rations available to these nationless populations.

On the opposite wall, the playful “Feastings,” by Anthony Goicolea, provides a stark contrast to Vilasini’s bleak work. A riot of color and youthful exuberance, “Feastings” depicts a food fight among digitally multiplied self-portraits of Goicolea himself, clad in a schoolboy’s uniform and surrounded by the gilt and glitz of an opulent dining room.

Julie Blackman’s “Candy” offers a decidedly different take on childhood gluttony. Her subjects are somber, a pair of dark, soulful eyes staring out of the picture as the little girl’s playmates sit apathetic, their satiation underscored by the detritus of candy wrappers and abandoned lollipops strewn around them. In the background is a reproduction of Thomas Gainsborough’s “Blue Boy,” underlining the piece’s melancholy as Blackman reflects on the loss of childhood innocence and glee.

Rounding out the exhibit are Katja Loher’s “Last Supper?” and Ori Gersht’s “Falling Bird,” video pieces that explore the ramifications of modern excess and environmental abuse and engage with art history and the question of memory.

With its current exhibits, 21c has proven itself worthy of its museum moniker. Both “Aftermath” and “Lost Suppers” are diverse, engaging and well-curated, offering up a feast of globally sourced, discussion-provoking works to Louisvillians hungry for contemporary art. They are not to be missed.