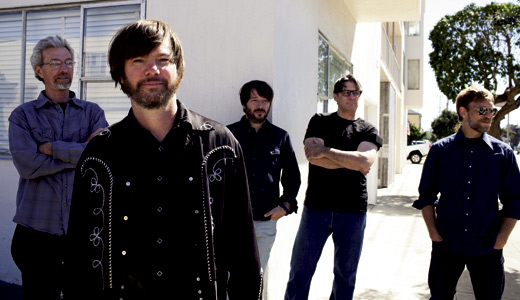 Jay Farrar is a man of obsessions. From his interest in the music of Woody Guthrie to his fascination with Kerouac and the Beat Poets, Farrar has built his career on translating his passions to song with bands like Son Volt, Uncle Tupelo and other various and sundry musical partners, including Jim James. So it comes as no surprise that Honky Tonk, the latest Son Volt album, is rooted in a more recent fixation of Farrar’s — pedal steel guitar.

Two-and-a-half years ago, he took up the instrument in his side work with Colonel Ford, a throwback country band based in St. Louis that plays area honky tonks and dive bars. “I just became immersed in country music from the 1950s and the early 1960s,” Farrar says. “I’d always messed around with lap steel guitar, but I decided to pick up a pedal steel.”

The danger with recording such an album is that it could so easily become a caricature, a rote recitation of what Buck Owens, George Jones and company have already performed so expertly. But Farrar is quick to point out that he and his bandmates made sure to allow the music and retro techniques ample room to breathe.

“We wanted to acknowledge and pay homage to that particular brand of country music that I found so inspiring,” he says, “but I also did not want to feel limited by its parameters. And that meant usually (going) through the process of just working a song out in the studio … we just went in whatever direction the song seemed to need.”

One example is “Down the Highway,” a plaintive ballad about the uncertainty of chasing a dream that relies on twangy steel licks to convey its rich emotional textures. Farrar notes that the song is as rooted in Irish pub rock as it is in American honky tonk. There’s a world of wisdom inside a fiddle tune, he sings. Throw this love down the highway/and see where it takes you.

Farrar points out that many of the innovators of the genre were expatriates from their native states, having left places like Texas, Oklahoma and Missouri in search of work. “They were migrant workers,” he says. “It was, from day one, pretty much the music of the common people.”

Farrar channels the Possum — God rest his soul — on album opener “Hearts and Minds,” a sprightly waltz that finds his lonesome voice whining about waiting for love/that’s out of danger over the grate of twin fiddles. That technique, “a little bit off in pitch,” he says, “creates a natural chorus effect (and) a more interesting sound.”

The influence of Guthrie is one Farrar also explores in “Falling Cars and Junkyard Dogs,” his memoir that was released in March. “I’d never written anything except songs and postcards, and it just felt like the right time to kind of take stock of where I’ve been and where I’m at,” he says of the book. “It was kind of like cognitive medicine, just reliving some of those experiences, and I tried to just include (those) that were unique to me, that didn’t seem like it could have happened to anyone else.”

Farrar is glad to be back on the road, on tour with his bandmates. He’s interested to see how the songs evolve from show to show, he says, finding yet another fresh take on pedal steel licks and twin fiddle breaks. But he also sees another benefit: “There’s just something about singing music every day that’s good for the soul.”