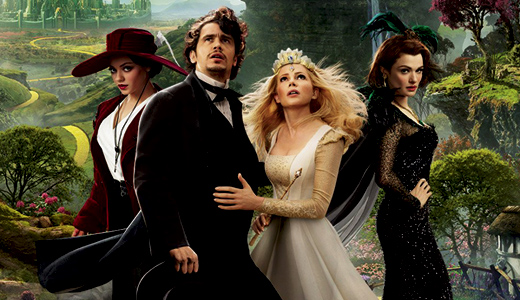 This is one silly-assed movie — and that’s a good thing! Jeremy Renner and Gemma Arterton are the titular fairytale sibs, here re-imagined as blood-sport action heroes who rain hell down upon evil witches wherever they find them. Expect to see some nice action scenes, a bare butt or two (it is rated “R,” you know), crackly burning witch-flesh, and the always-welcome Famke Janssen. To say more would risk spoiling some neat surprises. Bottom line: Big Dumb Medieval Fun for adults — and now available in an unrated version! We get the couch!

OZ THE GREAT AND POWERFUL

This supposed “prequel” to “The Wizard of Oz” is a gem, with director Sam Raimi completely losing his sanity once given access to Disney’s fabled stable of movie magicians. It is a visual delight from opening title to roll-credits, and that includes those three comely witches: Mila Kunis, Rachel Weisz and Michelle Williams. But the story lacks L. Frank Baum’s brilliant character development, and star James Franco as the would-be wizard doesn’t really seem to “get it.” Hey, even the best gems have flaws, but Raimi knows how to wrap them in light to make them sparkle. Great family fun; but, oh, if only this were a musical …

This wonderful Western, focusing on a young family fighting for survival and the right to farm amid unscrupulous mining interests, comes from writer/director Jared Moshe (“Kurt Cobain: About A Son”). Remarkably, he has gene-spliced the artistry of both John Ford and Clint Eastwood with that fresh, nuanced feel of modern indie cinema. Trust us, this is one of the best movies you never saw. Fix that.

FERLINGHETTI: A REBIRTH OF WONDER

If you don’t know the name Lawrence Ferlinghetti, you don’t deserve to be part of the world today. One of America’s greatest poets and writers, founder of the Beat Generation along with Jack Kerouac and Allen Ginsberg, Ferlinghetti has been quietly guiding our cultural evolution for nearly a half-century with his irrepressible wit and unique insights. This biodoc takes a look at the man and his passions with help from an amazing array of friends. Infectious and highly recommended.

Kentucky Senate Republicans should sue Netflix for revealing their secret dirty laundry in this thinly disguised tale of Sen. Mitch McConnell, the Terror from Tuscumbia, Ala. Kevin Spacey plays the powerful Majority Whip who will do anything to anyone to stay in power, endlessly back-stabbing and dirty-dealing his way to the presidency with wife Robin Wright by his side. Not that his fellow politicos are any better! They consider their constituency to be cattle, useful only for slaughter and profit. Waaaay too real for our blood, this series scares the living bejeebers out of us. You’ve been warned.

Tom Hanks narrates the historically true tale of how — and more importantly, why — John Wilkes Booth (Jesse Johnson) killed President Abraham Lincoln (Billy Campbell). Made for the History Channel by producers Tony and Ridley Scott, based on Bill O’Reilly’s bestselling book, the perspective is perfect, and the reenactments are done with emotion and a critical eye to make sure that everything you see and hear is as accurate as physically possible. And it’s exciting! What more could you want?

Wow. We really don’t know what to say about this. The late Forry J. Ackerman was the greatest movie fan who ever lived: the publisher of Famous Monsters magazine and muse to generations of moviemakers. But according to this doc, he also posthumously edited his own biography, literally marking out lines in a script after his death, which is then given the full CSI treatment to prove its authenticity. Includes comments, tributes and testimonials by Forry fans and friends such as Richard Matheson, Whitley Strieber — and even Forry himself! Simply too much fun to be viewed alone. Our highest recommendation.

This was interesting: A classic Chinese-style historical costume drama, but from Korea and set in the days of their own culture’s royal intrigues. Crazed King Gwanghae (Byung-hun Lee) fears assassination, so he secretly recruits a look-alike peasant (also Lee) to become his reluctant stand-in/target. But before the pawn is ready, the king is poisoned into a coma and the substitute must take over, with his life constantly in peril from dangers inside the court and without. Based on a true story; worth checking out.

This is more a high-concept film than brainless actioner, which is surprising, considering that the star is Dwayne “The Rock” Johnson. He plays a dad whose son is wrongly accused of a drug crime and faces 10 years in prison due to mandatory sentencing laws. With no conspirators to turn over, the son is screwed — so dad makes a deal: He’ll go undercover and set up some REAL bad guys in exchange for leniency for his son. (It was inspired by a real “Frontline” news report.) A solid drama with just enough action to keep things interesting.

A nice — if slightly hammy — bit o’ modern horro-fun with Aurelia Riley (she was the breathtaking AIM ping-pong girl/model in a scene from “Iron Man 3”) escaping a bad marriage, only to wind up in a grungy, haunted apartment with Daniel Baldwin as her neighbor (shudder). As her waking visions of a tortured little boy become more intense, she comes to realize that Baldwin might have something to do with it all. Spooky-good fun.

The latest in a series of super-squeaky-clean family movies from the watery pen of Ms. Lewis, courtesy of the Hallmark Channel. This one stars one of the most beautiful women imaginable, Katie Leclerc (who made quite an impression as a Raj’s gold-digging deaf girlfriend on “The Big Bang Theory”), looking for her birth mother (Sherry Stringfield of “ER”), while a pair of cads block the way in hopes of stealing her inheritance.

A biodoc on Mumia Abu-Jamal, who has spent 30 years on death row for the murder of a policeman, a crime for which he is clearly innocent. His true offense at the time was being a thorn in the side of the U.S. government, writing and reporting on hypocrisy, injustice and the abuse of political power with such fervor that he incited others into political activism, freedom rallies and similar seditious acts. A rock solid doc driven by Mumia’s own words and the voices of many whom he has inspired including Angela Davis, Dick Gregory and Cornel West.

This Troma-ish low-rent ’80s horro-comedy has been described as “despicable, reprehensible, obnoxious, offensive, crude, and downright nasty” by some — and they were being kind! The plot, about a pair of homeless young people who discover that the local liquor store is selling cheap wine that causes consumers to melt into colorful, messy puddles of goo, is just a thin skeleton for the fresh-faced filmmakers to try out silly horror gags. But nobody’s complaining. A loving restoration with lots of bonus goodies. Enjoy.

THE LIFE AND TIMES OF ALLEN GINSBERG

While ostensibly the definitive biodoc on the visionary, radical, spiritual seeker, poet and champion of human rights, this two-disc deluxe compilation is also a perfect time capsule of American culture beginning with the Beat Generation. With interviews and commentary by anyone who was anyone during the last 60 years.

This recent SciFi Channel remake/ripoff/sequel of the 1984 classic brings back Michael Pare from the original as the time-traveling USS Eldridge — subject of a failed Navy electronic cloaking experiment 70 years ago — slams into the year 2013 (on an airport runway, no less) with devastating effect. Nicholas Lea, Ryan Robbins, Emilie Ullerup and Gina Holden run around amid flashy special effects, with veteran thesp Malcolm McDowell cameoed in for a spot of fun.

Not to be confused with the current Elijah Wood/Jason Gann American cable series remake, this is the original Australian version starring Jason Gann and Adam Zwar. A truly weird and wonderful look at a man and his dog — who appears to be a perfectly normal canine to everyone else, but the man sees him as a talking, human-sized guy-in-a-rug. The results are damn funny and remarkably intelligent in a bizarre sort of way. Subversive as hell.