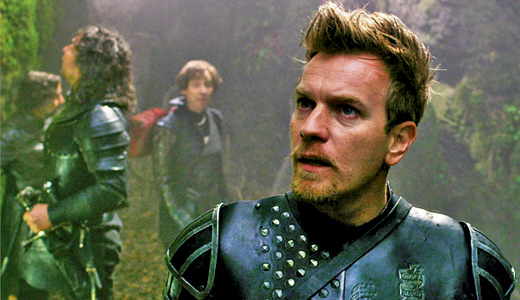 It’s “The Hangover” with younger dumbasses. The night before his big medical interview, Justin Chon’s buds take him out for one beer that turns into an all-night debauch. The buds, Skylar Astin and Miles Teller, get all the best lines, Chon suffers all the comic physical pain and humiliation, and local babe Sarah Wright (a Seneca grad) licks a great lollipop while wearing too many beads. These things are becoming formulaic, but that’s not to say they aren’t damn funny, damn sexy and … damn, we wish we were 21 again!

Young Jack (Nicholas Hoult) unwittingly releases a legendary race of CGI giants from their cloud kingdom in this goofy fun tale. Eleanor Tomlinson plays the requisite princess with a combination of charm, verve and really, really nice hooters, but it is Ewan McGregor’s cock-sure knight who has all the best lines (including a parody of his “Star Wars” standard, “I’ve got a bad feeling about this”). All in all a rollicking, kinda silly romp through a fairytale kingdom with little of the cloying Disneyesque trappings that seem to infect such things. A great couch-flick, family-night movie or high school first-dater; gangs of big dumb fun.

When we first read the title, we thought, “Uh oh, the SyFy Channel is at it again,” but we were pleasantly surprised to find that this is a dramatic nature tale about the “real” life of Speckles (“Spotty” in the original Korean), a young dino who learns to hunt with his mother. But life is harsh, and too soon he finds himself alone and afraid; eventually he must confront One-Eye, the cunning and savage adversary who took away everything he loved. Something of a coming-of-age tale told with the latest in South Korean CGI tech. Aka “Tarbosaurus 3-D” or “Jeom-bak-i: Han-ban-do-eui Gong-ryong 3-D.”

This low-rent indie horror about a wildly dysfunctional family reminds us of Hammer Studios’ early manor-house psycho-thrillers. Scream queen Debbie Rochon appears as “The Governess” to a family who are incapable of leaving their home (we won’t spoil why). Their isolation devolves into a sick game that inevitably turns violent, and that’s when they discover just how screwed they really are. Not the best movie we ever saw, but a classic case of inventive filmmakers learning to do more with less money.

A very entertaining drama based on the true story of a losing Ohio high school baseball team — winning only six of 23 games in their season — which magically turned itself around to win eight post-season games and the state championship. But this isn’t really a “sports” movie: The filmmakers wisely treat it as a coming-of-age tale, complete with first love, belief in yourself and others, and the simple, unexplainable mysteries that make life so wonderful. We liked it.

This Dustin Hoffman-directed arter with Tom Courtenay, Billy Connolly, Pauline Collins and, especially, Maggie Smith in a tale of manners and elder intrigue within a retirement home for world-class musicians. It seems that the four were once a famed quartet that broke up when Dame Maggie’s star ascended alone, her ego destroying her marriage in the process. Now Maggie is coming to live at the home, and the quartet is to be reformed — except that the haughty diva completely refuses to sing. Can harmony ever be found once it is lost? Wonderful.

RON ASHETON: TRIBUTE CONCERT WITH IGGY & THE STOOGES AND FRIENDS

If you don’t recognize the name, we’ll forgive you this one time. Ron, who died New Year’s Day 2009, was a guitarist and songwriter for proto-punk masters The Stooges since their inception in 1967. In 2012, he was awarded No. 60 in Rolling Stone’s list of 100 Greatest Guitarists of All Time. Yet despite being a godfather of the seemingly self-absorbed punk movement, he was also a philanthropist who created an animal welfare foundation and helped launch the careers of scores of struggling musicians. All profits from this doc-concert, featuring Deniz Tek on guitar and the incomparable Henry Rollins, go to Ron’s charities.

Fans of “Coronation Street” are trembling with excitement over this exceptional BBC drama, never seen on these shores save bootleg VHS. A seemingly happy Liverpool family with five irrepressible boys begins to slowly implode when a vengeful woman from their past arrives — a woman who knows the family’s darkest secrets. Brilliantly written by the likes of Russell T. Davies (“Doctor Who,” “Queer as Folk”), with the cream of British acting talent, this is a powerhouse drama — with just a hint of the Christian supernatural — that revels in laying bare societal taboos, shocking crimes and loathsome characters hiding in plain sight. Trust us: You will love this.

We’ll ignore that nonsensical title (“last” and “sequel” seem mutually exclusive) and focus on the positives. After returning to New Orleans, amnesiac Ashley Bell struggles to remember the terrifying events of “Part 1,” which killed her entire family. But — surprise! — the evil isn’t done with her yet, leading to more painful scenes of contorted levitation and shopping with her buds.

No one expected this to go a second season — hell, no one expected it to air a first season! — but Elijah Wood and Jason Gann somehow made it back for another truly weird and wonderful look at a man and his dog. This season Wood (who sees the dog as a human-size guy-in-a-rug, played by Gann) gets both a real job and an actual girlfriend, but his life isn’t complete — or a complete train wreck — without Gann teaching him the underlying meaning of it all. Or something like that. Frankly, we’ve never been able to figure this out, but we can’t deny that it is courageously and subversively damn funny.

Cuba Gooding Jr. hides his Oscar at night, lest it see him making silly-fun low-rent actioners like this with Emmanuelle Vaugier (nice work if you can get it!). Long a widow, she is surprised when FBI-guy Gooding shows up at her door and says, “I’m sorry, but your husband is dead!” So they hop a plane to Australia, right into the arms of some baddies who are ready to kill to keep the whole thing quiet. Really, really bad, but wonderfully so.

A solid dramatic wrinkle to the stale, formulaic modern vampire movie: Irina the bloodsucker is dying. After a century of life as a reluctant predator, her body has reached its end, and her living hell will soon be painfully over. Her only “friends” — her motel manager/protector and a weary prostitute — seem to be in an even more decrepit state, rotting away from the inside in their own ways. Not exactly the feel-good romp of the year, but a welcome new adult take on a trivialized genre.

It’s the next-to-last season for USA Channel’s top-rated show, a wickedly entertaining homebound-former-spy romp starring Jeffery Donovan as the smart one (Michael), blistering Gabrielle Anwar as the pouty hot one (Fiona), Sharon Gless as Michael’s mom, and Bruce Campbell as his usual goofy self. The previous season saw the producers turning the show much darker, with Jere Burns as an uber-baddie who screws up whatever it is that Michael and Fi have going on by framing her for murder, a plot line that keeps this season simmering as well. A simple show, well written and acted by some of the best in the biz; with neat spy tricks, bikini babes and at least one good explosion per show. What more could you possibly want?

COME OUT AND PLAY

This low-rent American/Mexican thriller (a remake of 1976’s “Who Can Kill a Child?”) treads a bit into “Children of the Corn” territory but remains original and frightening. A young, just-pregnant married couple take one last “just us two” vacation to a remote island. But where are all the adults? “Oh!,” the kids say, “they’re still hungover from the big festival.” Uh huh. Eventually the terrible truth is discovered, leading to a horrible choice. Good stuff.

A riveting drama from Chile about a powerful politician: ruthless and dominating, a fabulously wealthy man feared and/or respected by all, including his wife and family; but he feels unfulfilled except when with his much young male lover. Lately, however, he has become ashamed of their secret. They decide to take a trip to get away from the world, but alone together they are forced to face their lives and decisions anew.

Those in the know know that this is Season 3 of the popular Pokemon-like card game/collectible/TV juggernaut from 2001. And here it takes a decided turn, leaving the established digital universe of the first seasons to follow a new group of gamers who uncover a never-before-suspected evil. The show’s producers — who long said that it was meant for a pre-teen audience, not “children” — began to push the envelope on anger and aggression within the competition, coupled with intersecting plotlines of romantic love. While this move cost them in parent-approval, it cemented their leadership in the genre; most gamers we know hail this as the best season of any game-based animated show, hands down. Now available in an eight-disc, 51-episode official collector’s set. Enjoy.

THE AMAZING ADVENTURES OF THE LIVING CORPSE

This R-rated animated hit from the San Diego Comic Con is a minor miracle. When an angel falls from grace and the world is about to be given over to evil, one of the undead decides to help him keep the other rotters in their graves, which might just save everything he once held dear. Some neat 3-D effects and clever voice work, but the CGI characterization is the real star. We liked it.

Now available on Blu-ray, this infamous reenactment of the deeds of Charles Manson and “family,” famously rendered in unflinching detail by savage underground director Jim Van Bebber. It is grisly. It is bloody. It revels in historically accurate gore, drugs, sex, torture and sadism. So why would you want to watch this? Because it strips away the fantasy elements that entice so many disturbed people into committing such acts. Consider it “Scared Straight” for the would-be sadist. As with all Severin Blu-rays, the print is pristine, the soundtrack crackles, and the bonus materials are bountiful and entertaining. Not for everyone, but a history-making film finally given the treatment it deserved.

Steve (Josh Lawson) agrees to secretly marry Russian would-be immigrant Anna (Isabel Lucas) in exchange for a wad of cash. But when his cracked family learns of the impending wedding, they go into nuptial overdrive, turning the secret little ceremony into the biggest wedding of the year. And then there the little matter of Steve’s one true love (Kestie Morassi) … A wild little chick-flick from Australia.

It’s a shame that this only lasted one season (10 episodes) — there was a lot to like here. Brian Austin Green, Peter Cambor, Derek Miller and Harold Perrineau are longtime buds who have a party band. It plays weddings, bar mitzvahs, reunions — anything with women, booze and a paycheck. And each gig is crazier than the last. Just ask their girlfriends! A nice balance of bad judgment, real world and horndog nostalgia that reminds us of our own post-HS guitar-band gigs. You’ll dig it.

Comedy Central’s resident lazy, dimwitted, beer-besotted, drug-fueled telemarketers are back with more unpredictable lowbrow shenanigans. Clearly inspired by “The Office,” a trio of slackers (Blake Anderson, Adam DeVine, Anders Holm) do a hyper-animated update on Cheech and Chong, making life miserable for their employer. It may sound juvenile but rises above its boring sitcom roots by sheer unpredictability and just a hint of true inspiration in each episode. The two best outings this season include acting as detectives to spy on a friend’s cheating spouse, and a particularly funny look at religion.