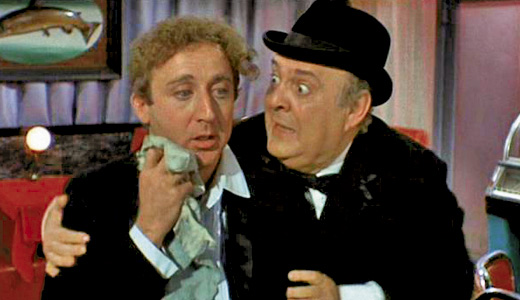 Three years before they launched “Airplane,” David Zucker, Jim Abrahams and Jerry Zucker — who did sketch comedy in college as “Kentucky Fried Theater” — hired an unknown director named John Landis (“Animal House”) to help them assemble a hodgepodge of unrelated gags into a feature-length movie. Crude, rude and just plain nuts in spots, this was decades ahead of its time and is now available in a beautiful Blu-ray. Just keep repeating: “The popcorn you’re eating has been pissed in. Film at 11.”

Finally available on Blu-ray, the production that made Mel Brooks a household name! Corny, racist and gleefully over-the-top, Mel leads Zero Mostel and Gene Wilder (with major help from the irrepressible Kenneth Mars) through a singing, dancing, sure-fire Broadway flop called “Springtime for Hitler,” all for the sake of pocketing loads of investor cash. A cinema classic — infinitely better than that Nathan Lane/Matthew Broderick remake — and one of the funniest films we know. Don’t miss it.

Every seven years since 1964, filmmaker Michael Apted has revisited a group of British now-adults, documenting how they see themselves and the world around them. May not sound like much, but this is one of the most intelligent, intimate and thought-provoking docs you’ll ever seen. The surviving participants are now 56 years old, which really hits home, regardless of your age. Recommended.

We’re not big fans of Julianne Moore, but luckily she’s largely swamped by the performance of Jonathan Rhys Meyers in this unnecessarily R-rated psychological spooker. She’s a disturbed shrink, her life and mind rushing down the tubes, when she meets Adam (Meyers), a man with multiple personality disorder. In short order it becomes clear that Adam’s personalities are all murder victims! This great plot element, plus Meyers’ amazing physical work, taking on the varying characteristics of each victim, makes the movie.

Electra Avellan, one of those amazingly hot babes from “Machete,” stars here as an aspiring actress who ditches her boyfriend on the morning of her 25th birthday. From there she visits a wonky psychic and spends the rest of the day in a more-or-less comic attempt to find something meaningful and life-affirming in Hollywood. Good luck! With help from Danny Trejo, Jennifer Tilly, Robert Rodriguez, Margaret Cho and others.

China, the world’s largest and richest totalitarian nation, joined the World Trade Organization in 2001 and immediately subsidized its exports in violation of that agreement. American companies retaliated by … closing American plants and moving to China! Today we owe the Chinese more than $3 trillion. This doc takes stock of how exactly all that happened, which Americans profited most by it, and how those same Americans have successfully blocked any form of trade controls to line their own pockets.

Marton Csokas (Celeborn, husband to Lady Galadriel in “Lord of the Rings”) is amazing in this new noir detective series from Britain. He’s smart, hard and absolutely hates corruption of any kind — and has suffered greatly because of that. Why so tough? Well, the man has some very, very dark secrets in his past, making him one of the most watchable characters on the telly today. Based on the books of Robert Wilson and set in Seville, Spain, where Falcón and his small group of homicide dicks deal with the most gruesome crimes imaginable — all of which is splayed out in Technicolor horror for the viewer — the atmosphere is shocking and intoxicating. Highly recommended.

Marisa Tomei and Joshua Jackson liven this low-rent indie international drama about a Syrian living in Canada (Alexander Siddig) whose daughter goes missing back in Damascus. He returns there, of course, and finds the place a living hell. Tomei, his former lover, does the best she can to help him, but embassy-wonk Jackson seems to have other goals. With Oded Fehr; good stuff.

An American submarine crew, led by Andre Braugher and Scott Speedman, is ordered to nuke Pakistan. When they radio for confirmation, they are fired on by another U.S. sub. Clearly pawns in a conspiracy, the crew scrambles to shore on a tropical paradise as armed troops gather at sea. This impressive and imaginative drama — with a surprising number of hot women aboard — came from the men behind “Oblivion” and “The Shield,” but never found its audience, which is a shame because it is tense, action-filled and profoundly entertaining. We liked it.

The fabulous true saga continues! This second installment in the “Tai Chi” trilogy, begun with “Tai Chi Zero,” continues the steampunk theme as young master Yang Luchan, his face famously marked with an odd, fleshy growth, teaches the secret Tai Chi fighting style to a vulnerable village beset by an army of death machines, the vanguard of a ruthless railroad company determined to run a rail line through their homes. Fast, funny and entertaining as hell!

This G-rated kid-flick is the real deal: an honest-to-goodness flick about kids, for kids, and starring … a wiener dog named Shelly. To prove it, we counted the number of times and ways that the word “wiener” was used, and while the total was in five figures, not one of them was sexually suggestive (snigger). A family’s small dachshund dreams of competing in a hotdog-sponsored competition for a $100,000 prize. But angry Dad, who blames the dog for making him lose his job, says “No!” The kids take matters into their own hands, resulting in a silly bit o’ fluff for even the most jaded, regardless of age.

A great little spooker from Singapore about a platoon plagued by the spirit of a crazy witch who died at exactly 23:59 in the haunted “7th month” — and vowed to return to harvest new souls at that accursed hour! Nicely atmospheric and extremely creepy; recommended.

A PLACE AT THE TABLE

A devastating doc on hunger in America that underlines the hypocrisy of a capitalist society. Despite exporting, discarding or wasting literally billions of tons of food each year, one in four children don’t have enough protein to sustain themselves. And beyond the actual hunger, it is estimated that 80 percent of all Americans suffer chronic health problems because, frankly, we all eat over-processed crap full or fat, salt and sugar instead of a balanced — and far cheaper! — diet. This doc focuses on three people from across a wide swath of U.S. cultures, lifestyles and economic situations to demonstrate both the problems and easy solutions. A must-see.

This is why Blu-ray was invented! For those without a proper education: Warner Baxter won an Oscar for his role here as The Cisco Kid, the clever, charismatic, fun-loving gaucho who must outmaneuver a curvy Latina mischief-maker while evading the hapless sheriff hot on his trail. Based on the works of O. Henry, this first “talkie” Kid movie set the mood for a string of dozens to follow, featuring Baxter, Cesar Romero and, our favorite, Duncan Renaldo, as the always happy, always in trouble, and always ready to help antihero. A great B&W transfer (as God intended); this thing is a must-own for any fan of timeless cinema.

The goal: To make the most shockingly offensive high-profile comedy in history. The result: Even WE were offended — can you imagine what that requires? Liev Schreiber, Emma Stone, Richard Gere, Dennis Quaid, Seth MacFarlane and at least 100 other stars follow the loose thread of a washed-up movie producer, pitching increasingly bizarre ideas off the top of his head in hopes of scoring a new film. You will either be revolted or entertained — maybe both — and you might just laugh your ass off. Of course we liked it.

Ed Harris stars as Captain Demi, commander of a Soviet nuclear-missile submarine, haunted by seizures, insecurities and an insane KGB agent (David Duchovny) who intends to start WWIII. A first-rate claustrophobic drama co-starring Lance Henriksen, Johnathon Schaech and Sean Patrick Flanery that is supposedly based on real events. We may never sleep again.

We’re not sure what to make of this dysfunctional family drama/thriller from director Chan-wook Park (“Oldboy”), other than it is amazing. After Mia Wasikowska’s father (Dermot Mulroney) dies unexpectedly, a charming, mysterious uncle she had never heard of (Matthew Goode) appears, and Mom Nicole Kidman seems to be unusually friendly toward him. Instead of feeling jealous (or totally weirded out), she starts to have naughty shower thoughts of her own about the nefarious fellow now living in her house. The girl is clearly two fries short of a Happy Meal, but that won’t prepare you for the ending. Worth your time.

Now THIS is a movie! A messed-up modern couple (Juno Temple and Michael Angarano), struggling to get by, come to a bizarre realization: Their teapot makes them money every time they injure themselves! So what part of your body would YOU sacrifice to get rich? Original as hell; a perfectly dark and intelligent comedy that truly is laugh-out-loud funny! You’ll be talking about this for days; don’t miss it.

We are major fans of the “Dick Van Dyke Show” and watch it obsessively in reruns and on video nearly every day. It’s all available now on Blu-ray in various combinations — odd since the show is in black and white — but at 30+ episodes/season PLUS the greatest pile of bonus goodies we’ve seen, Blu-ray really helps free up room on our video shelf! This season includes such great episodes as “Never Bathe on Saturday” (naked Laura gets her toe stuck in the tub-faucet of a luxury hotel), “The Ghost of A. Chantz” with the whole gang trapped in a haunted cabin, and Rob’s stolen hit song, “Bupkis!” We are in heaven.