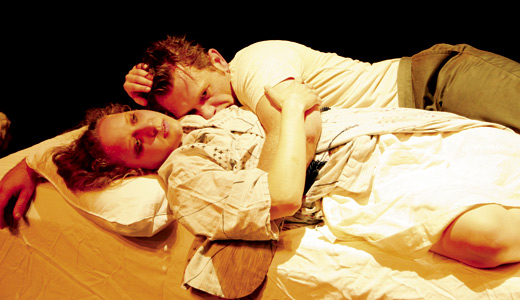 ‘American One Acts’
A production by the Savage Rose Classical Theatre Co. Continues through June 15 at the MeX Theater at the Kentucky Center. For info and tickets, call 584-7777 or go to savagerose.org.

The near total neglect of American one-act plays is one of those systematic injustices that becomes apparent only when someone does something about it — something as simple as putting a few of them on the stage in finely crafted productions that highlight the courage, power and wit that playwrights — both famous and little known — have lavished on these brief dramas.

Over the last few years, Savage Rose Classical Theatre Company has carved a distinctive niche with productions of challenging but well-known masterworks by writers from Christopher Marlowe to Samuel Beckett. With its current bill of one-acts by Pendleton King, Tennessee Williams and William Saroyan, the company revives a set of striking but seldom performed pieces.

Williams’ “27 Wagons Full of Cotton,” a 1946 play that was the source of Elia Kazan’s controversial film “Baby Doll,” is the best known of these plays. Directed by Jennifer Pennington, it’s a chilling, beautifully written study of corruption, greed and madness that features three extraordinary performances. Brian Hinds plays Jake, the scheming owner of a failing cotton gin; he brutalizes his wife, Flora (Lauren Maxwell), with cruelties that are all the more frightening because of his cool, clinical approach — Hinds plays the fellow as if he were one of those folks who could commit mayhem without a change in blood pressure. Maxwell plays Flora as a giggling sexpot-savant who may or may not understand the role she’s to play as the human currency that funds Jake’s “good neighbor” policy. And Jeremy Sapp gives a fine performance as the mustachioed martinet whose riding crop furnishes creepy punctuation to the sinister unfolding of events.

J. Barrett Cooper directs the other two plays. Pendleton King’s “Cocaine” must have been a shocker when first produced in 1916. Its stark, natural language — and its subject matter — give it a grim authority that’s still compelling nearly a century later. Joe, a has-been boxer (Jon Patrick O’Brien), and Nora (Karina Strange), a hooker whose luck has turned against her because of a scary cold sore on her face, inhabit a derelict flat near a rumbling train track in New York City (kudos to Cooper for the sound design as well as for the direction). Because the couple is behind on the rent — and have been without cocaine for four days — the boxer is contemplating selling his own sexual favors for money, a proposition that elicits a furious response and a dreadful proposal from Nora.

“Hello, Out There,” by William Saroyan, premiered in 1941 as a “curtain raiser” (a short theatrical feature that preceded the main event back in the days when an outing to the theater was an all-evening affair). It’s a finely written work about a charming young gambler locked up on what seems to be a bogus rape charge and the drab small-town girl who cooks for the prisoners. Here, Jon Patrick O’Brien channels the dreamy, optimistic energy of a gambler betting on the future as he paints a future for himself and the cook (Alexandra Burch). At least until reality (in this case, the ostensible rape victim, her husband and an accomplice, played by Karina Strange, Brian Hinds and Jeremy Sapp) forces its way through the jailhouse door.