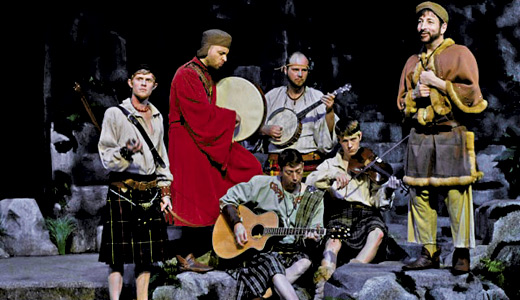 ’Tis the season for cross-dressing, for duels and fools, for willow cabins and cross-gartered man servants and picnics beneath the stars. Shakespeare in the Park is back for their 54th season, this year with a Celtic interpretation of the Bard’s delightful romp “Twelfth Night,” or “What You Will.”

One of Shakespeare’s most popular comedies (recently brought to the pop culture forefront by a pre-stripping Channing Tatum and a mug shot-less Amanda Bynes), “Twelfth Night” focuses on the romantic misadventures of Viola, a shipwrecked maiden disguised as loyal servant Cesario; Orsino, her master; Olivia, the lady next door; and Sebastian, Viola’s presumed-dead twin brother. Mistaken identities and dramatic ironies abound as the four principles, along with a slew of merry mechanicals and bawdy servants, fumble their way in and out of love.

“It’s one of those heartfelt shows that really plays well in an outdoor environment and with the audiences,” explains director Brantley M. Dunaway. “The idea was to take ‘Twelfth Night’ and really explore the human nature of love. If you look at the play, each of the characters experiences some expression or form of love for another human being, which can come in many different shades and colors.”

Dunaway chose to present “Twelfth Night” in the world of the Celts, a setting he feels lends itself to the themes of the play. A progressive and open society, where women fought as warriors and same-sex relationships were not uncommon, the Celtic community is well-suited to the gender confusion and tangled romantic webs of Shakespeare’s pastoral comedy, enabling Dunaway and the cast to explore the social constructs of love and relationships, as well as issues of masculinity and femininity.

“Some people say that if Shakespeare had written a musical, ‘Twelfth Night’ would have been it,” Dunaway says. Indeed the play opens with the famous line “If music be the food of love, play on,” and then goes on to include more than half a dozen songs with lyrics by William Shakespeare. For this production, Dunaway engaged the services of musician Bentley Rhodes, whose original, Celtic-inspired music scores the show.

This is the first time in Dunaway’s tenure as artistic director that Shakespeare in the Park has included live music in a production. Six musicians playing traditional instruments — from the bodhrán drum and banjo to the mandolin and tin whistle — not only provide a live soundtrack for the show but also are themselves characters in the world of the play, sometimes playing multiple roles in addition to their parts in the band.

Live music is just one of the many ways Dunaway is trying to “up the ante” with this year’s season. From cinematic posters to food, booze and other amenities, Shakespeare in the Park hopes to increase their production value and elevate the theater-going experience for seasoned regulars and new audiences alike.

“We really want to break down people’s expectations of what classical theater is,” says Dunaway. “Part of our mission is to make it accessible, and accessibility is more than just free. Accessibility is presenting it in a way that allows people to enjoy the beauty and poetry of this 400-year-old text.”

Dunaway is particularly passionate about engaging new audiences, people who would normally choose to spend their Saturday night at the movies or a bar instead of watching Shakespeare.

“I think we have a tendency in the United States to take ourselves, and particularly Shakespeare’s work, too seriously,” he says. “This isn’t guys in tights and codpieces with their hands in the air and a stiff jaw. This is real, human existence. People get put off by ‘that Shakespearean language,’ and they forget that Shakespeare is English. I got a phone call a couple years ago from a woman who said, ‘I’ve been teaching English for 20 years and I know you contemporized the language.’ I told her, ‘Actually, it’s from the First Folio.’ But she insisted, ‘No, you changed it. I understood every word.’”

It’s expectations like these that Shakespeare in the Park hopes to shatter with a dynamic, expanded experience. But margaritas and chicken cordon bleu aside, it all boils down to beautiful language, timeless characters and essential human stories.

“If theater is the expression and the exhibition of the human condition, then what we’re endeavoring to explore here is what connects us, those forms of adoration and love that we engender upon each other,” Dunaway explains. “We’re all flawed human beings. And we all want to be loved.”