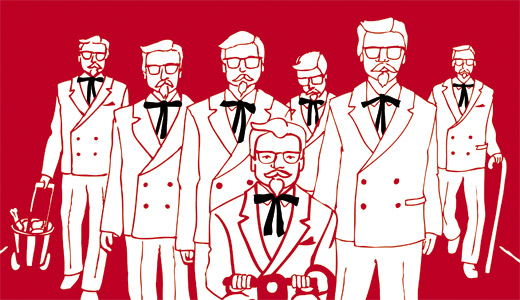 March of Colonels @ Why Louisville

The Austin, Texas-based The Gospel Truth has taken a slow and steady approach to their muscular riff-raffery, now able to be heard on their recently released album A Lonely Man Does Foolish Things. Their 12XU label head Gerard Cosloy, a veteran of all things good in the guitar underground for decades, called them “… a purposeful, unusually deft ensemble fronted by a singer who comes out of his shell in the boldest way when you put a microphone in his hand.” Featuring guitarist Pat Travis (also known for drumming with the Golden Boys), the band began in 2007, only recording their first full-length last year at Austin’s BBQ Shack — sadly, an actual recording studio. With locals Temple of the Golden Dawn and Madame Machine. —Peter Berkowitz

‘Reasons to Be Pretty’

Neil LaBute’s “Reasons to Be Pretty” is not a love story — rather, it is a story about love, exploring the societal construct of attraction and beauty. Greg and Steph are the central fixtures in this drama, exploring the less-than-pretty aspects of their natures, and each other’s. LaBute has been both criticized and praised for his heavy use of crude language and dialogue — criticized because it may be overbearing and offensive, and praised because it’s colloquial and human. “Reasons to Be Pretty” is a dialogue between two bruised lovers, a story told through overheard conversations, and a relationship in pieces; it is a play that teaches its audience the importance of listening. —Natalie French

Rounding out Pandora Productions’ 2012-2013 season is a play with a catchy name and an even catchier storyline. “5 Lesbians Eating a Quiche” is a campy comedy set in Cold War-era 1956 at an annual quiche breakfast of the Susan B. Anthony Society for the Sisters of Gertrude Stein. Apparently it’s all fun and games until the big, bad communists come to town and the sisters’ secrets begin to bubble up to the surface. The play debuted in Chicago in 2011 and was performed at the 2012 FringeNYC Fest, where it won the Best Overall Production award. The New York Times described it as “raw and magnetic dementia destined to attract a cult following.” Quiche: It’s not just for breakfast anymore. Dig in. —Sara Havens

What better way is there to create some cool memories besides going to see a band with that name? Well, sure, there’s other ways — skydiving, stealing a Camaro and not getting caught, witnessing an extra exciting baseball game, or maybe even spending time with loved ones … but if you ignore that faulty premise, this remains a head-to-toe (H2T) lineup of all killer, no filler bands. On tour and based in Chicago, Cool Memories bring their New Wave prog dream psychedelic rock, as heard on their 2009 debut album, Debt. Local up-and-coming indie rockers Mote and fuzz rock freshmen Weird Girl (riding high on their debut full-length, Bad Friends) join for a night of more-accessible-than-you-might-think fresh rock attack action. —Peter Berkowitz

The Delphines’ music is a delightful paradox: a bubblegum-garage-pop sound paired with dark, haunting lyrics. The band sings of violence and sex and isolation; they are inspired by Al Pacino romances and all things dark and gritty. Hailing from Milwaukee, they’ve made their home on Bandcamp, where their music is free to sample, experience and enjoy. On Friday, they join She Might Bite and Twenty First Century Fox at Zanzabar at the very end of their tour, the day before their homecoming. The band’s enthusiasm for the rougher side of pop will be right at home in Louisville, showcased by their rhythmic guitars, drums and love of the psychedelic. —Natalie French

‘Booty of the Year’

“Booty of the Year” isn’t what it sounds like. It is not a booze-fueled Friday-night twerking competition at the city’s hottest new nightclub. It is the latest offering from Louisville playwright Cisco Montgomery and Kentucky Shakespeare veteran Phillip Cherry. Described as “a powerful story of love, revenge and sibling rivalry,” the play is set in perhaps the most dramatic atmosphere outside of daytime soap operas: the world of professional wrestling. Nasty Girl and Miss Longcar, jealous sisters in love with the same ring announcer, find themselves fighting in a grudge match for the title of “Booty of the Year.” Will family values prevail? Will anyone get spanked, literally or figuratively? To find out, park your booty at MeX Theater this weekend. —April Corbin

What happens when you pick up another man’s cell phone after he dies? Apparently a lot of trouble. That is what playwright Sarah Ruhl attempts to answer in this production, presented by Theatre 502. The story follows Jean, who picks up Gordon’s phone after it incessantly rings, but he has passed away at the café where she was eating. She takes the phone and is transported into a darkly humorous world. Jean lies and claims to be a coworker of Gordon’s and attempts to bring a sense of peace to his family. However, Gordon’s dubious past is about to become Jean’s present as she deals with his on-edge mother, his nice-guy brother, his mistress and the black market organ trade. This surrealistic play examines our fixation on cell phones and our connection to the real world. —Charles Bowles

March of the Colonels

Louisville will keep it truly weird this weekend as a life-size wax Harlan Sanders leads droves of fellow Kentucky colonels and wannabe colonels down East Market Street … just for the hell of it. The grand marshal will don one of Sanders’ original suits and travel via a remote-controlled Hoveround, an awesomely eccentric undertaking sponsored by WHY Louisville in conjunction with the quirky store’s eighth anniversary. Registered Kentucky colonels (I’m still waiting for that honor, FYI) will receive a complimentary string tie, which must be worn — along with a white jacket — in order to march in the front of the pack, dubbed the Kentucky Colonel Bucket. Non-colonels who want in on the fun are welcome to march behind their more esteemed Kentuckians. —Sarah Kelley

Anytime Brandi Carlile rolls through is an event, bringing fans from across the commonwealth and beyond to see the Washington State native with the big voice perform her emotionally charged fusion of country-folk-rock. Many have seen her on stage with the Louisville Symphony, playing with her band at the Brown Theatre, and belting under the stars in a killer show last August at Iroquois Amphitheater. Carlile returns to the latter venue with the sultry Hanseroth Twins and cellist Josh Neumann, where she is sure to fling her big Patsy Cline-infused voice out across the park on fan favorites like “Dying Day” and “The Story,” as well as offerings from her most recent album, Bear Creek. Be sure to congratulate Carlile on her recent nuptials — she married her girlfriend in Boston last September. Sorry, ladies. —Jason Howard

The opportunity to have some of Louisville’s tastiest, most scrumptious food returns to the Clifton Center. The 21st annual Taste of Frankfort Avenue features an array of the city’s best pizza, ice cream, upscale dining options and other savory delights. Some of the restaurants involved include Comfy Cow, North End Café, Porcini, Varanese and nearly 20 other establishments along Frankfort Avenue. The event also features live music, a cash bar and a silent auction, all to raise money for the center’s programming throughout the year. New to this year’s festivities is “After Taste,” a party open to the public at 7:30 p.m. for a $5 donation. —Charles Bowles

Corncob pipes and skinny-dippers deck the walls of Garner Narrative this month as part of their current exhibit featuring Kentucky folk artist Hagan McGee. Hard times forced the Manton, Ky., native and his family to move to Louisville during the Great Depression, but McGee continued to dream of the idyllic scenes of his rural childhood. In 1993, he began giving those memories artistic life through colorful paintings and sculptures depicting his formative years in Washington County, and the now 86-year-old continues to work daily in his studio. Gallery director Angie Reed Garner explains, “I related to McGee’s life story, the relocation from the country to the city for the sake of work. Remembering the one place sustains you in the other; in that way, that place comes with you. His work reminds me how all art comes from the same impulse, the need to find or create sustaining stories.” —Jennifer Harlan

“The Art of Fire” displays the work of pyrographic (wood-burning) artist James Burton, whose interest in pyrographic was triggered after watching an art education program on television. In 1990, he entered his first pyrographic piece in the Kentucky State Fair and won a first-place blue ribbon. Along with his wood-burning pieces, Burton’s exhibit features a drawn image of Louisville native Muhammad Ali in a boxing match. “I liked to watch the development of the picture, adding a touch here and a touch there,” Burton says about his pyrographic pieces. “I said to myself, ‘This may be something I can get good at.’” —Charles Bowles

Do you know what you sound like? While I’m sure I’m largely composed of cheese, chocolate and peaches, I don’t know what my personal sound is (please do not insert rude noise here). Douglas Lucas has figured it out. His sound art installation is a 2-second recording of his voice saying his name, then stretched so that it takes two weeks for it to play once. Add a light that shines on a self-portrait photograph timed to the recording, and the result is a multi-sensory interpretation of the artist. “I put my voice under a microscope, so to speak, to magnify the uniqueness of its essence,” Lucas explains. “The piece is a means of examining the pure sound of spoken word language that is the foundation of its symbolic representation.” —Jo Anne Triplett

My new favorite flowers are peonies, those lush flowers with tissue paper petals. I wonder how small pieces of outdoor sculpture would look surrounded by these bright beauties? We’re lucky Yew Dell Botanical Gardens is close by, for it’s an ideal place to go for inspiration. The mission of the 34-acre garden and horticulture resource center is to help “people develop beautiful and sustainable gardens … (focusing) on development of superior garden plants to enhance gardens, increase biological diversity in our communities, and decrease the need for pesticides.” They do this in many ways, including lectures, workshops and community events. Sculpture and gardens go hand-in-hand, something Yew Dell has promoted over the last six years. Their latest juried show features 42 works by 21 regional artists, with all the sculpture for sale. —Jo Anne Triplett