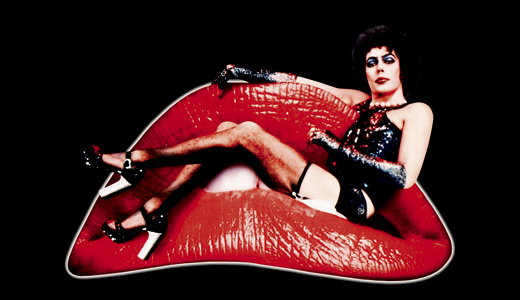 Screenshot from the trailer of "Rocky Horror Picture Show."

U of L School of Music

If you’re one of this world’s most impressive classical guitarists, then we don’t need to tell you where you will be this week. U of L’s School of Music, host to a diverse, fun and also educational number of musical happenings throughout the year, now takes a break from summer break to host the Guitar Foundation of America’s convention. Concerts, master classes, lectures and competitions will all be on display, with a headlining concert by Cuba’s legendary horn man Paquito D’Rivera, teamed up with guitarist Berta Rojas of Paraguay, off-campus at the Brown Theater on Saturday at 8 p.m. Other concerts will be held at Comstock Concert Hall, including performers from Croatia, Russia, Poland, Norway, Italy and the U.S. —Peter Berkowitz

For those interested in the eclectic side of local music, the Louisville Experimental Festival might be right up your alley. Set to run over the course of five nights at five venues, the LEF looks to keep Louisville as weird as possible by virtue of exotic and extraordinary musical performances. That each night’s event is held in a different locale allows for a broader taste of Louisville culture, although it doesn’t seem there is any particular theme per evening — a series of performances united only by their own sonic quirkiness. While there are too many acts to name, the highlights include the mighty Tropical Trash, the impossible-to-define Humongous, the avant jazz of Sick City Four, and a duo of noisemakers, R. Keenan Lawler and Tim Barnes. —Syd Bishop

Yip Deceiver have been steadily gaining fame since their first performance in late 2010, and with good reason: Their music is upbeat, energetic, enthusiastic — reflective of Davey and Dobby’s personalities. Though they have only officially released an EP, their LP is soon to drop, featuring several well-known artists, including members of Of Montreal. Their unique brand of electric pop has set them among the ranks of Rareluth and Rubies, and their relationship with Of Montreal has been established over “outdated Midi hardware, tabletop technology, and analog and FM synths.” Originally hailing from Atlanta, Yip Deceiver join Andy D in Louisville Thursday, celebrating their upcoming album, Medallius. —Natalie French

The folks behind Blue Moon Circus are at it again — offering up all the jollies of a carnival with a little edge. This circus is for adults only, kids, and they recommend you bring both a barf bag and a drool bucket. The Sky Bar at Saints will be commandeered by aerial acrobats, belly dancers, marionettes, musicians and sexy freaks, including the Great Baldini, Mistress Ember, Desert Revels and Shawna the Dead. There’ll also be a Russian fortune teller, who can probably guarantee this night will not be like any other in town. Step right up, don’t be shy. It’s best to check your inhibitions at the door. —Sara Havens

Noah Hewett-Ball’s emotional and popular pop-rock band, Cabin, is building anticipation for its latest album, the first in almost three years, It Is What It Looks Like. The quintet (also including Sarah Welder, Shane Thomas and recent additions Zack Kennedy and Charlie Rivera) has been releasing tracks one at a time, in chronological order, on their website until their release show on Saturday. One of the songs off the album, “An Algorithm,” gives listeners an interesting commentary on how businesses are profit-driven and base their decisions off mathematical algorithms. Their first two albums earned “Album of the Year” distinctions from WFPK, 91.9 FM; this new album has a more dreamy and experimental sound than their last, Among the Rectangles and Changeable Parts. —Charles Bowles

My dad would fall into that unique category of hoarder known as “the collector.” If he’s buying things that could be worth value 100 years or so down the road, then it’s really not a problem if my mom and he can no longer park their cars in the garage due to boxes and boxes of “collector’s items.” He loves hitting all the yard sales in town, and if he lived here, I’d have no doubt he’d be at Sunday’s neighborhood-wide yard sale up and down Frankfort Avenue. The event is in conjunction with Food Truck Sunday, which will be set up on the lawn at St. Joe’s, along with a mini farmers market. My dad is currently collecting parrot figurines, so if you see any, let me know! —Sara Havens

Summer blockbusters are usually overrated, so skip the upcoming budget-busting new releases and get your fix of quality flicks elsewhere. Kentucky Shakespeare’s free Monday Movie Nights series is a good place to start. Held outdoors at Central Park in Old Louisville, it’s like a drive-in for environmentally conscious and/or cheap people. This season’s lineup is a diverse mix that includes only one dud (I will let you decide which that is): “Argo” (July 1), “Les Misérables” (July 8), “The Princess Bride” (July 15) and “The Rocky Horror Picture Show” (July 30). As required by the rules of its participatory cult, the “Rocky Horror” showing will include live actors, birdseed, toast and newspaper. —April Corbin

This pairing of two left-of-center, influential quasi-stars stars polymath-rocker David Byrne, who emerged in the late ’70s, and his spiritual offspring, Annie Clark (dba St. Vincent), who emerged in the late ’00s. The pairing shouldn’t not work — both are highly intelligent and confident composers and performers who dabble in seasick rhythms funkier than the average indie band, yet it’s still surprising that these cross-generational talents work together as well as they do. They recently released Brass Tactics, a tour teaser follow-up to their full-length, Love This Giant. The EP’s remixes and live gems promise a show full of the daddy-daughter duo’s solo and band work on top of their collab cuts and well-tailored looks. —Peter Berkowitz

The Louisville Visual Art Association, Kentucky’s oldest visual arts organization, is featuring “Louisvillians Who Lead” at its PUBLIC Gallery. A project of the Open Doors community outreach program, the exhibit has encouraged students to grow as artists and leaders — to create art as they imagine themselves in vital community roles. The pieces focus on the photography and writing of these students as they relate to the leaders they were assigned — including Denise Troutman, John Yarmuth and Sadiqa Reynolds, all of whom have raved about their experience with the students and the program. “Often, it is not the youth who learn from the adults, but it is the adults inspired by their courage and resilience,” says Reynolds. This is what the exhibit celebrates. —Natalie French

The word “stoned” has multiple meanings. While the one you thought of first is personally the most telling, don’t worry — the show “STONED” at Gallery Janjobe is not some sort of Rorschach test. The exhibition’s coordinator, Sharon Major, says the gallery “always (gives) free rein to the artist’s imagination when announcing a new show. And, as usual, we have a variety of amazing art with many different interpretations of the show’s title.” The many artists, including Joy Lait, Patricia Brock and Fred Miller, work in a multitude of media. Featured are images of stone architecture, which you should expect to see, as well as the unexpected use of glass fashioned to look like stone beads. The exhibit will be up during the June 28 FAT Friday Trolley Hop. —Jo Anne Triplett

U of L Ekstrom Library

This is not your grandpa’s tackle box. The University of Louisville reels visitors into the Ekstrom Library this month with their Billy-Bass-mouthful of an exhibit, “A Lure Can Never Be Thrown in the Same River Twice: Recognizing Identity and Value in Handmade Fishing Lures.” Featuring more than a century’s worth of hand-crafted lures, the exhibit attempts to recast (pun completely intended) this ancient craft as a true folk art form, rich in detail and representing a heritage of craftsmanship dating back to ancient Egypt. The ultimate mixed-media artists, lure craftsmen often use recycled and scavenged materials, from seashells and machinery to fur, feathers and even spare silverware. Sadly, the event is Bring Your Own Fishsticks. —Jennifer Harlan

Long before the invention of cell phones and paparazzi hiding in bushes, celebrities relied on staged photos for promotion. The collaboration between “the talent” and the photographer usually resulted in a story they both wanted to tell. U of L’s Photographic Archives has again opened its vault to exhibit celebrity stills from the collections. The more than 40 images include photos taken in Louisville of such notables as Babe Ruth and Lou Gehrig with the Louisville Colonels baseball team, and Duke Ellington at a record shop on Fourth Street. There are even early images of Cassius Clay and Elvis Presley before they were Muhammad Ali and Elvis. And then there’s the photograph that must have sent 1950’s adolescent males over the moon: Marilyn Monroe eating a hamburger at a drive-in restaurant. —Jo Anne Triplett