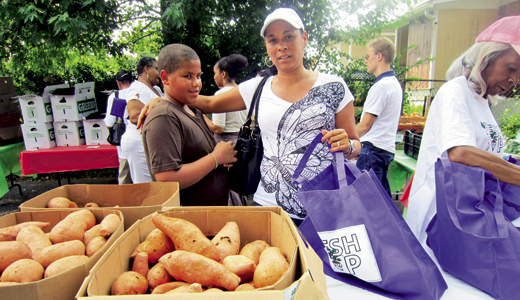 In the past, when Shawnee resident Mary Montgomery wanted fresh cucumbers, lettuce or onions, she crossed the bridge into New Albany or drove to the East End to buy it. She had mostly given up on the grocers nearest her, frustrated by produce she describes as rotten or close to it.

“I don’t think that’s right,” she says. “I shouldn’t have to leave my neighborhood.”

Her complaints echo the sentiments of other west Louisville residents, who have long voiced concerns over food access and food quality disparities between largely low-income, African-American neighborhoods and more affluent, predominately white parts of the city.

Two years ago, the nonprofit New Roots began to address this so-called “food desert” by connecting local farmers to underserved residents in Shawnee, Old Louisville, and Newburg. Their model allows individuals to pool their money in order to buy wholesale from area farmers during growing season, which usually runs from June through September. The shares of produce are delivered at weekly, biweekly or monthly “Fresh Stops,” where local chefs volunteer their time to demonstrate how to prepare or cook any unfamiliar vegetables.

A week’s share might include collard greens, kale, acorn squash, sweet potatoes, green beans, tomatoes, pumpkin, lettuce greens, and more. The shares are designed to feed two to four people, and many stretch the food as far as they can.

“I stockpile like a squirrel so I can make it last through the winter,” says Montgomery, a participant and volunteer at the Shawnee stop from its inception.

The Fresh Stop program has largely been successful, and this summer it is expanding to include a fourth Fresh Stop, at Wellington Elementary School on Kaufman Lane in southwest Louisville.

Unlike the first three branches, which grew their program by taking advantage of the built-in network of people found at the local churches and community centers that host the Fresh Stops, the new Wellington Elementary School stop was chosen to complement the work of another nonprofit, the Food Literacy Project. (The school also boasts one of Jefferson County Public Schools’ health and fitness magnet programs.)

The Food Literacy Project brings children and families, many from low-income neighborhoods, to Oxmoor Farm to teach them about natural food. While some groups visit just once, many, including students from Wellington, visit several times throughout the year to create a continual experiential learning experience.

“Many have never interacted with food in its natural state,” explains Angelique Perez, the program director at Food Literacy Project. “Some come thinking, ‘Yuck. I don’t like vegetables.’ Ninety-nine percent of the time they find something they like.”

But roadblocks often arise once those excited children return home to neighborhoods where a large percentage of households don’t have a full-service grocer within reasonable walking distance. For anyone without access to a car, that dramatically limits access to healthy food, increasing the reliance on nearby fast-food chains.

“The effort has been to build demand, and we’ve done that in these youth. We’ve instilled passion,” Perez says, “but they have nowhere to go after that.”

Food Literacy Project and New Roots organizers believe the Fresh Stop at Wellington will give these children’s families a chance to incorporate fresh foods into their everyday lives and continue the conversation that began in the classroom and at farm field-trips.

It isn’t true for Patrice Harris. The west Louisville resident says she got serious about cooking with fresh food after she had her first child five years ago. During the summer, she participates in the Shawnee Fresh Stop. During other seasons, or when she needs something not provided in her share, she makes the trek to Whole Foods. She says her young son loves veggies, and she can already see him forming healthy food habits.

“He will still choose to eat cookies, but he recognizes that it’s unhealthy,” White says. “He even came home the other day and told me there was no protein in his juice. He had read the label. I read labels; now he is grasping the concept.”

The immediate impact of this undertaking is obvious — putting fresher, healthier food onto the plates of residents who want it. New Roots’ larger, loftier goal is to show farmers, developers and others that fresh produce is important to all Louisville neighborhoods — not just the most affluent areas.

“The food system here was created and maintained by outsiders,” Moskowitz says. “They’ve made choices.” Those choices led to an imbalance where, as one prominent 2006 research study found, there was one full-service grocery store for every 25,000 residents in west Louisville, as opposed to one per 12,500 residents in Jefferson County as a whole.

Since that study, attempts to address food access issues have produced mixed results. For example, several farmers markets were established but ultimately disbanded because they lacked a customer base able to pay retail prices, or because some farmers were reluctant to do business in certain neighborhoods.

More successful was a partnership between the YMCA, Department of Public Health and Wellness, and Center for Health Equity to create “Healthy in a Hurry,” a program to assist small corner stores in low-income neighborhoods in building the infrastructure needed to sell produce and accept payment from food-assistance programs. However, inflated prices and the sale of non-organic or non-local products have presented problems at some of the participating stores.

The advocacy group Louisville Grows is overseeing another attempt to improve food access through the creation of a community garden in Shawnee and one in Portland.

Cassia Herron, board chairwoman for the Community Farm Alliance, believes the answer is tied to economic development and growth. “Customers are becoming more vocal. They’re saying people of color do eat healthy and locals want to be connected to that,” Herron says. “Now how do we empower them with capital? How do we move from a service-based solution to a market-based solution? How do we get small businesses resources?”

Showing that grassroots efforts are worthwhile investments requires better measuring tools for predicting their potential long-term impacts. That can be difficult to do, which makes expressing concerns over food injustice and proving there is a demand for better produce even more important.

Late last month, New Roots held its second annual Strawberry Jamm Festival to kick off the local growing season and celebrate the start of their Fresh Stop drops, which run 11 weeks. Within 40 minutes of the listed start time, organizers had run out of strawberries for selling and could only hand them out to people who’d pre-ordered.

It was an ironic moment not lost on New Roots volunteer and board member Myrna Marshall Brame: “I guess even we didn’t realize people loved strawberries so much.”

In other fresh food news …

Ron Smith, owner of The Root Cellar in Old Louisville and Germantown, last month raised more than $11,000 through Kickstarter to open a “mobile market” — essentially a food truck from which he plans to sell locally sourced produce, meats and cheeses in west Louisville. The goal, he says, is to do real-time market research and identify a block or area that could sustain a brick-and-mortar location.

Response has been mostly positive, says Smith, who also hopes the truck will raise awareness of Louisville’s food access issues.

“People who come into my store already from west Louisville have suggested places I should go. They are excited,” he says. “Of course, there are some people who see it as a bad thing and think I am just another well-meaning white guy. I see where they are coming from, but the bottom line is: I own a food store, I have a very specific product, and I want to offer it wherever I can. If it works? Great. If it doesn’t? Well, it won’t be the first bad idea.”