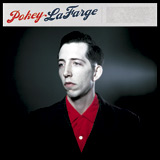 Pokey LaFarge is a solid Midwestern name. Just like his old-time stage name, LaFarge’s music is a throwback to a bygone era, blending elements of ragtime, Western swing, country and jazz in this infectious release. Whether he’s singing about “getting by on central time” in the opener or “Kentucky Mae,” the beauty who has bewitched all the fellas around town, LaFarge breathes new life into old sounds with these fully realized songs. Co-produced by LaFarge and Ketch Secor, the record is a showcase for the singer’s acoustic instrumentation. And while LaFarge’s winsome croon can prove occasionally tiring over the course of an entire album, by the time he sings about good old Louisville on the closer “Home Away from Home,” he is back in your good graces, leaving little doubt that you’ll give his record another spin.