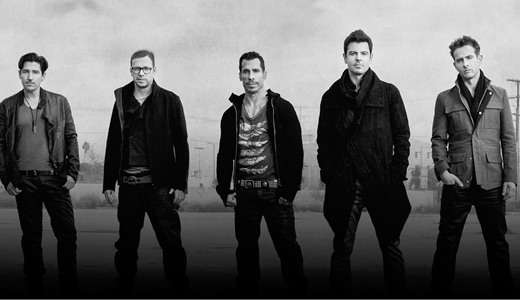 In the late 1980s and early 1990s, a New Kids on the Block concert could be described as pandemonium, with arenas packed with teenage girls screaming to every note the five singers sang and every movement they made on stage.

Two decades later, the quintet of Donnie Wahlberg, Danny Wood, Jordan Knight, Jonathan Knight and Joey McIntyre is back. But so many years down the road, one would assume a New Kids concert would have evolved into a gentler, less shrieky affair.

“They’re really not that different, other than age,” Wahlberg says of the group’s fans. “They’re just as frenzied, just as loud and just as excited. I think we are, too. I think, if I can say this, that the X-factor in all of it is we’re all older and we appreciate it much more — the band and the fans.”

The return of New Kids on the Block has already turned into a more extended reunion than many expected. Reconvening in 2008 after a 13-year break, the group followed up album The Block with its second post-reunion album, 10, in April, and is now back on tour and still showing arena-filling drawing power.

In its first go-around, from 1984 to 1994, the New Kids sold 80 million copies of its four albums. The group rejected many big-money offers to reunite after its breakup, with Wahlberg often credited as the New Kid who balked at these opportunities.

He had consistently maintained he wouldn’t do a New Kids reunion simply for the money. There had to be a legitimate musical, creative reason for the group to exist again. That incentive surfaced when Wahlberg heard the song “Click, Click, Click” and thought the breezy, hip-hop-laced ballad was just right for New Kids.

“Emotionally, I was looking for something different, a different way to express some things I was dealing with,” says Wahlberg, who was going through a divorce at the time. “And I found the song. I think, when all of the other guys were gung ho (about the song), we took the first step. And from there, it just caught fire. And it really hasn’t slowed down since.”

As with The Block, the spark for making the 10 album was Wahlberg hearing a song, this time “Remix (I Like The).” “I loved it instantly,” he says. “And that song had been sitting around for three years. Nobody wanted it. I couldn’t believe it.”

The process of making 10, though, was markedly different than for The Block. “I’d say the Block album was more me leading the pack, and staying in the studio and writing and working with the different producers,” Wahlberg says. “With this album, the other guys were around.”

“It’s much different to be in the studio in 2008 with myself and (producers) Akon and RedOne writing a song and then presenting it to my band members than it was this time around, sitting there with my band members listening to a demo for the first time and having Jon Knight say, ‘I love this record. I really want to be a part of this record.’

New Kids on the Block