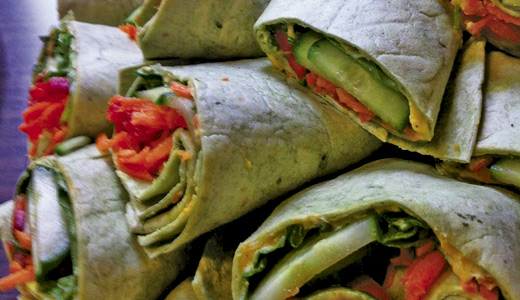 Tucking the lavender into a bag, she moves on to the Sapori Italia stand to chat with the vendor about his agri cream cheese. Back at the Farm to Fork stand, beneath a canopy of trees, two of Hurley’s employees sell bacon brown-sugar biscuits and bourbon brownies to a steady stream of customers. Meanwhile, in a commercial kitchen near U of L, two other employees are busy creating farm-to-table dishes for a vegan wedding for 200.

If it seems a little idyllic, in a way, it is. After nearly five years in existence, Farm to Fork has begun landing notable clients and premier jobs. On June 23, Farm to Fork catered dinner for 300 at Yew Dell Botanical Gardens for an annual fundraiser co-hosted by Slow Food Bluegrass. The fundraiser, now in its third year, is a big deal. The first two years, Kathy Cary catered it. For Hurley, stepping into those shoes for the event was something of a milestone.

But the burgeoning of Hurley’s catering business didn’t come easily, and it didn’t come quickly. She invested countless unpaid hours to create a viable business with a mission she believed in: local, sustainable food that supported the region’s farmers.

Sweat and tears? Yes and yes. The first four years of the business were “the steepest learning curve I have ever encountered,” Hurley says. “I have never cried so much in my life.” Overworked and understaffed, she took on jobs not only as a caterer but also as a personal chef, a craft services provider on film shoots, and a cooking class instructor. She did virtually everything herself and paid herself no salary, essentially subsidizing her clients’ locavore desires.

“She did it like a farmer,” says Adam Barr of Barr Farms, one of Farm to Fork’s major suppliers.

Hurley grew up in Western Kentucky eating home-cooked meals harvested from her family’s summer garden. “I grew up eating seasonally,” she says. “It was really a weird experience for me to have to start shopping at Kroger when I moved to Lexington” in the late 1980s.

There, she held a succession of restaurant gigs, including a stint as general manager at the white-tablecloth Jonathan at Gratz Park. It was there that she first saw a chef build fine-dining meals around local and regional ingredients. But eventually, she realized “it wasn’t satisfying to me to serve wealthy patrons really expensive food and $300 bottles of wine. I started thinking, ‘How am I contributing to the good of the world?’”

Soul-searching ensued. She left the restaurant business and took a job in Louisville at the nonprofit Kentucky Foundation for Women. Looking for community, she joined the grassroots Community Farm Alliance, which supports small family farmers and the Slow Food movement. Learning about political and social justice issues in the era of farm bankruptcies and Farm Aid “fired me up,” she says. “I got really mad.”

In her job at the nonprofit, she took charge of creating organic dishes for events. Undaunted by her lack of formal training, Hurley challenged herself to re-create her favorite recipes from restaurants where she’d worked or dined. “That’s when I figured out I could really cook,” she says. The idea for Farm to Fork was born.

For three years, she waited for the right moment. When Grasshoppers, the local grocery and food distributor, opened, she knew she was getting close. She waited a year to make sure Grasshoppers survived, ensuring she’d have a steady supplier.

At first, Hurley thought she wanted to be a boutique caterer, serving food to groups of 40 or 50. She quickly learned that catering for groups that size was uneconomical, but she kept doing it anyway, keeping the business afloat those first three or four years essentially by sheer force of will — coupled with the aforementioned no-salary tactic.

There were successes. Farm to Fork has had a booth at the Douglass Loop Farmers Market since it began in 2011, a move that raised considerable name recognition and undoubtedly led to some jobs. Still, something had to give. The way Hurley was running her sustainable-catering business was, well, unsustainable. It was time to go big or go home. A year ago March, that’s exactly what she did.

Hurley took out a loan. She moved the business into a commercial kitchen on Warnock Street and hung a big, bold sign on the building. She hired employees, including a chef with a degree from the Culinary Institute of America. Sales doubled. Business expenses quadrupled. Scary math, but “I feel like that’s when the business really became a business,” Hurley says.

Relieved of head-chef duty, Hurley’s role now consists of developing and testing recipes, visiting job sites, and managing events. She handles sales, marketing, accounting and legal. She sits behind a computer a lot.

Still, the reason she went into catering remains. “You meet people you wouldn’t normally. You get to be an intimate part of people’s events,” whether that’s a wedding or a memorial service, she explains. “And you can change the menu every time.” She loves going into people’s homes, seeing their art, getting to know them. Hurley’s clients tend to be young, health-conscious locavores (Farm to Fork’s Facebook fanbase falls mostly into the 25-44 demographic). “We do a lot of weddings on someone’s grandparents’ farm, which is challenging because you basically have to create a kitchen in a field.” But five years in, Hurley has set up her share of field kitchens, and she adds simply, “We’re good at that now.”