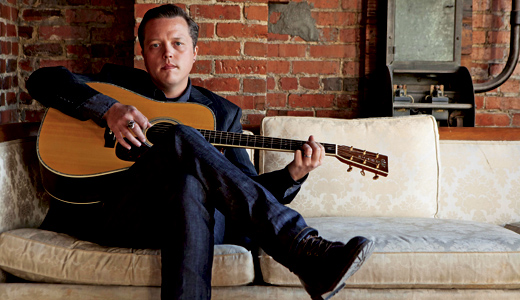 Jason Isbell is well on his way to becoming recognized as one of the best songwriters today, but for a while, the writer couldn’t find his way past the biggest cliché. Drinking to excess is such an easy trap to fall into when one spends enough time on the road, driving countless hours to play an hour or two a night in a bar. Having sopped up inspiration from decades of rock, country and soul music, Isbell found himself becoming a little too inspired by the antics of his heroes.

“Well, you know, it was all good for me, in some ways,” he argues — or justifies it — now. “You need to live life like that for a while if you’re gonna write songs about people who are dealing with their own kind of loss and their own screw-ups.

“I think it all worked out for the best,” he continues. “It certainly wasn’t anything I could have maintained for any longer than I did; it probably ran its course a few years before I actually settled myself down. But it is nice to have that reservoir to draw from when it comes time to write a rock ’n’ roll song. Nobody wants their rock ’n’ roll to sound like Christian rock,” he concludes with a laugh.

Now 34, Isbell has begun his third life in music. Having first made his name as a singer/songwriter and guitarist with the Drive-By Truckers, Isbell left that band in 2007. His exit was inspired in part by his desire to lead his own band — but also because of his divorce from Truckers bassist Shonna Tucker.

In February, he married singer/violinist Amanda Shires, and the Alabama native now lives a new life in Nashville, where the couple spends days writing and nights having sober fun with friends.

Isbell’s newest album, Southeastern, is due on June 11. It’s the second billed solely under his name since his 2007 solo debut, Sirens of the Ditch, though in the time in-between he’s led Jason Isbell & the 400 Unit. Southeastern didn’t come out as solo as Isbell and his producer had originally intended.

“We were initially going to do a solo acoustic thing,” he says, “but we both got pretty bored with that.” They decided to bring in members of the 400 Unit who were available, as well as some Nashville cats.

The collection was written in the spring and summer of 2012, shortly after Isbell sobered up, and the lyrics don’t shy away from what was on his mind at the time.

Girl, leave your boots by the bed / We ain’t leaving this room / Till someone needs medical help / Or the magnolias bloom.

Shires has a new record coming in August, and Isbell contributed guitar to that, as well. The releases were purposely timed so that each could be a focus of attention at a time. Isbell says he enjoyed working for her because he didn’t have to deal with the usual pressures involved with being the boss.

Additionally, he gets to enjoy more time looking at the woman the Wall Street Journal recently called “The sexiest violinist since Jefferson.”

“Yeah, I saw that,” Isbell says in his soft Southern lilt. “There’s been a lot of violinists since (Thomas) Jefferson … He was oversexed — I don’t know if he was sexy. I know he couldn’t leave his slaves alone, I heard that.”

Shires sings and plays violin on the Southeastern song “Traveling Alone.” On the road now, away from the temptations of women and drink, Isbell has found a few ways to keep his mind occupied and inspired on the long drives. When’s he not reading books, he’s happy to look out the window and watch the highway. “I’m all right sitting still and being quiet for a long time. I don’t mind that.”

There’s also his love of movies. “I love Netflix. Netflix has been a savior for me, that’s been a really good thing.” He’s tried writing some screenplays, as much for writing practice as any real opportunity, and doesn’t rule out trying to do more in the future.

“I don’t really get bored. I think I’m too lazy to get bored.”

with The Paul Thorn Band and Brigid Kaelin