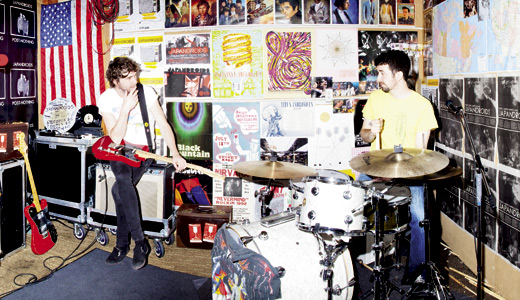 We’ve heard all the clichés: Two heads are better than one. Great minds think alike. Two’s company, three’s a crowd. We get it. Two can be a magical number. So what is one to do if not born with an Olsen twin?

You find one, of course.

Brian King and David Prowse may not be related by blood, but the two powerhouse players of Japandroids move together like two sides of a beating heart. When one slows down, the other follows. When one screws up, the other compensates.

“Dave and I are not actually very good musicians. We’re not actually good at playing each one of our instruments. But we are very good at playing together,” explains King, who handles the guitar and lead vocals while Prowse keeps the songs racing with unrepentant percussion. “Our timing, the way we interact and understanding what the other person is going to do before they do it … all those sorts of things, they’re all integral to us performing the way we do.”

Japandroids aren’t known for their subtleties, musically or otherwise. They’re going for loud and unsteady, the kind of anthemic music that sounds even better when magnified by 20 different amps crowded onto the stage, ripping away at eardrums without mercy.

And the band’s three-ish albums (they count No Singles, an album compiling singles and tracks from their EPs, as their sophomore release, between 2009’s thunderous Post-Nothing and 2012’s Celebration Rock) are full of the kind of half-shouted, half-sung garage rock that all but forces heads to shake and bodies to vibrate.

What makes the band something to watch is the way Prowse and King follow each other’s leads almost instinctively. It comes from hours and hours of practice and is constantly solidified with the more than 200 shows they play supporting each album.

“It’s just second nature,” says King. “That’s the foundation for our live show. We can play really hard, and what seems to be totally wild and out of control, but we never really lose control, actually. We both kinda know what we’re doing all the time inherently. Even if we’re not looking at each other, we just know.”

With hundreds of shows under their belts over the last five years, Japandroids have grown from a small Vancouver twosome to a band recognized around the world. It started with “Young Hearts Spark Fire,” the incredibly raw single off Post-Nothing that blitzes by so fast and strong you don’t have time to figure out why that chorus is so catchy. They built audiences around the addictive quality of their songs, and stage banter like, “Don’t worry, our lyrics are really fucking easy. You can sing along after 30 seconds.”

Now they’re putting much more consideration into the songs they write, knowing they’ll be playing them hundreds of times on multiple continents. They’re planning more, reaching for larger ideas, and finding new ways to enhance their performance.

Japandroids’ most recent — and first — show in Louisville was opening for the Walkmen at Zanzabar in 2010. King says the crowd seemed to want them to get their set over with so they could see the main band. Now that they’re coming back to play the headlining slot, the situation is different. They will be playing for people who are at the show specifically to see them, a privilege that is not lost on them.

But if there is any concern that their heads are getting big as their fan base grows, King is quashing that fear.

“We’re Canadian. There’s a natural sense of humility involved in life in general. You can’t really help it, I don’t think.”

King brings up the modesty of Arcade Fire, one of the most successful Canadian bands, as proof that there’s something fundamentally down-to-earth about people raised up North.

“Who the hell knows what would happen if we achieved any kind of monstrous fame or success or wealth or something? Maybe we’d both turn into two Kanye Wests or something, I don’t know. But I do think there’s an inherently Canadian thing about most bands that are from Canada that keeps them relatively modest, no matter how successful they are.”