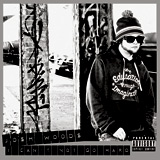 The introductory mixtape from Island Earth’s newest signing is a collection of largely industry production, but plays like his own. The 19-year-old emcee is a clever writer, if largely influenced by the punchlines of the post-Wayne rap world, showing a more refined talent than most of the syrup-based progeny of the little gremlin. Woods has a smoky, nasal flow that could grate if he hadn’t chosen production that envelopes and smooths the sharper edges, a skill in itself. Most of the tracks revolve around the party and bullshit of teenage years, book-ended by stronger efforts that dig deeper. The tape’s largely positive tone, and a refreshing avoidance of overstatements of false braggadocio, is appreciated and makes for repeated visits. It’s far from perfect, yet whets the appetite for his proper debut with eager ears.