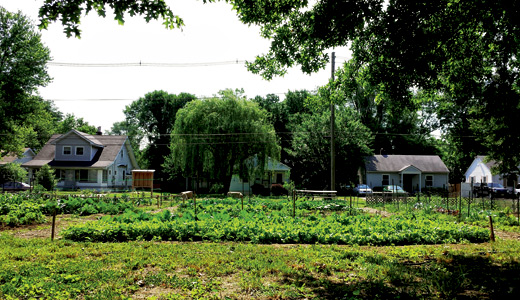 James Hinton is on the hunt. One by one, he flips over the leaves on a row of collard greens, searching for the source of dozens of tiny holes sprinkling the vegetables. Japanese beetles and other garden bugs find shelter from birds and the harsh sun by attaching themselves to the underside of leaves. They eat their way through them and can ruin whole harvests if left unchecked. As each leaf comes up empty, Hinton lets it go with his gloved hand. Before the leaf can plop back into place, he’s moved onto the next one. The 18-year-old is thorough, methodical and pays no attention to the overhead almost-noon sun, which is starting to beat down on the People’s Garden.

He eventually finds a bug and squishes it.

Later, while resting underneath a towering pin oak, Hinton says, “I like all this agricultural stuff. I’ve learned a lot about gardening; mostly that a lot of labor is involved.”

His is a unique perspective many urban teenagers don’t get — the ability to see food in its natural state, to take part in its cultivation, and to taste it at its freshest. Working at the People’s Garden through the Shawnee Youth Advocates program, Hinton was able to do that and more.

Located between Northwestern Parkway and 44th Street, the People’s Garden is 5 acres of community-oriented, mixed-used greenspace containing several gardens, a beehive and a tiny forest of trees leftover from the ground’s prior use as a growing space for pin oaks. There are also two greenhouses — kind of.

The two greenhouse frames were donated to the city back in 2011 and awarded to Louisville Grows, the nonprofit gardening advocacy group that established the People’s Garden. The city purchased the plastic needed to cover the frames shortly afterward and expected a quick turnaround on the project, but a lack of volunteer manpower delayed construction of the frames.

“It is unfortunate,” says Valerie Magnuson, executive director of Louisville Grows. “It has been more labor intensive than expected. Everything was done by volunteers.”

When the frames were finally built this year and locals like Hinton came to secure the plastic to it, a major hurdle appeared: The plastic is about a foot too short.

Unable to return the plastic because it was purchased so long ago, Magnuson and other organizers are now turning to what has become the new standard for fundraising: the popular website Kickstarter. They will launch a campaign at a community barbecue and celebration Saturday in an effort to raise $10,000.

“It’s been difficult,” Magnuson says, “but we’re making it work.”

Louisville Grows has helped secure funding and establish more than a dozen community gardens around the city, including one with a mini-greenhouse at the University of Louisville and one in Shively operated by the Refugee Agricultural Partnership Program.

The People’s Garden in Shawnee is the group’s most elaborate effort. Here, produce is grown for the nonprofit New Roots’ Fresh Shops and the Healthy-in-a-Hurry corner stores. Workshops, tastings and community gatherings are held regularly about topics like organic gardening. (The produce harvested at the People’s Garden is organic, though it isn’t advertised as such because locals often see the term as nothing more than an excuse for inflated pricing.) The 20-by-20-foot plots of the community garden contain a little bit of everything — tomatoes, basil, kale, green onions, cauliflower, and even peanuts. Last year, more than 2,500 pounds were produced.

Once the greenhouses are completed — and nobody working with the project seems concerned they won’t be — growing and teaching can happen year-round. Louisville Grows hopes it might become the prototype for future mixed-space gardens.

“The community has really embraced it,” says Jose Castaneda, an intern with Louisville Grows. “People are investing in it.”

Everything has been set up with input from the community. This has involved mandatory hearings held by the city, partnerships with neighborhood organizations, and door-to-door polling of residents on issues that might raise concerns — like the introduction of bees to help stimulate garden growth.

As it turns out, 70 percent of Shawnee residents are pro-bee.

“One man said he didn’t want bees because they killed a goat,” recalls Hinton, who helped with the canvassing. “He meant something he’d seen on Animal Planet or National Geographic or somewhere.”

Most concerns are easier to address.

A few miles away from Shawnee, another Louisville Grows project is under way in the playground of the former Portland Christian School, which was recently purchased by developer Gill Holland for conversion into something called the Compassion Building. Like the People’s Garden, this will include a community garden and a children’s garden for activities. It will also include a natural playground designed for “child-directed play,” which local residents chose over the typical metal jungle gym.

With the majority of the Portland community garden plots sold even before Louisville Grows’ tiller hit the ground, signs point to another success story. Magnuson says it could not have happened without vocal community support and assistance from Metro Council, especially Councilwoman Cheri Bryant Hamilton, D-5, whose district houses both the People’s Garden and the Portland site.

“There were people who said we couldn’t do it, that the plants would be messed with, that the greenhouse would get defaced,” Magnuson says. “It hasn’t. The community watches over it. They care about it.”

Still, residents were concerned enough over the safety of gardening equipment and harvests that they decided to keep up the chain-link fence surrounding the Portland yard. It is something Magnuson hopes will be reversed once the gardens are established and running effectively. She feels keeping the space inviting to the community is key to the mission, and furthermore that the fence isn’t necessary. It isn’t at the People’s Garden, where the only defacing has come from those pesky beetles.