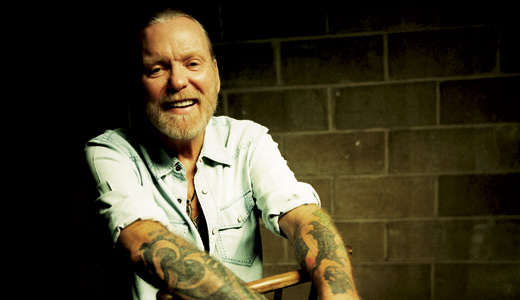 This year, Gregg Allman has been an active presence on the music scene. He took his solo band out for a winter tour and is now back on the road for a run of headline shows. With his longtime group the Allman Brothers Band, he did their annual three-week run of shows at the Beacon Theatre in New York in March and will meet up with his bandmates for a tour in August.

This schedule wouldn’t be that notable, except that it’s a sign Allman is back, healthy after a long and difficult recovery from a liver transplant in 2010.

“(They) called me and I was down there in two hours, bip-bop,” Allman said in a recent phone interview. “The damn thing (the liver) didn’t have a chance to get cold. I had complications from it. That’s where the hell (happened). That’s why it took three years for me to feel good again. Man, that’s a long time to wait and have pain and no energy. You just can’t hardly get out of bed. They shoot so many damn drugs in you, they had me whacked out on narcotics.”

Allman, 65, needed the liver after being diagnosed in 2007 with Hepatitis C. Many years of drug and alcohol abuse had ravaged his liver to the point that a transplant was the only way to save his life.

“I was getting to be a real sick puppy, I really was, because I had cirrhosis. I had Hep C, and I had cancer,” Allman said. “And that is the only way I got on the liver list. I mean, I’d be dying about right now. They told me I had about three-and-a-half years left, and they would have been real sick and real painful.”

He’s also been otherwise clean and sober for 19 years and even quit smoking a few years ago. His improved health and stamina are showing, not only in Allman’s busier tour schedule but in a greater level of activity on the creative front.

He’s been busy working with filmmakers who are turning Allman’s 2012 autobiography, “My Cross to Bear,” into a movie. “They’re still working on the screenplay. Casting will be the next thing,” Allman said.

The story of Allman’s life is certainly one of rock’s all-time great sagas, filled with tremendous success, major tragedy, breakups and reunions, and a catalog of albums that has had a profound influence on rock music.

Formed in 1969 in Jacksonville, Fla., the group’s first four albums essentially invented the Southern rock form, mixing rock and blues with hints of country and jazz into a signature sound that survives to this day.

But the vibrant beginning for the original band was marred by tragedy, as guitarist Duane Allman (Gregg’s brother) and bassist Berry Oakley died in eerily similar motorcycle accidents about a year apart, in October 1971 and November 1972 respectively. The group stayed together until 1982, re-forming in 1989. The Allman Brothers Band has been together ever since, albeit with a few changes.

In addition to the autobiography and movie, Allman has been picking up the pace with his music as well. In 2011, he released his sixth solo studio album, Low Country Blues, a tribute to the blues artists who have influenced him throughout his career.

Allman also has his sights set on an album of all-original material he promises will be worth waiting for. “The title will be All Compositions By… I’m working on it,” Allman said. “That’s going to be my crowning glory because that is at the top of my bucket list: All Compositions By… and then it will simply have my name.”

For now, Allman is excited to be out on tour with his solo band. Along with solo material, the show includes a few ABB songs and possibly covers.

“We do some of all of it, man. The good thing you’ve got to remember, when you’re making out a set list, is certain songs bring people back … to a certain moment in your life. So you want the songs to be very recognizable, but also you want them to be different every night. Achieving that is not the simplest thing in the world, but it’s doable.”