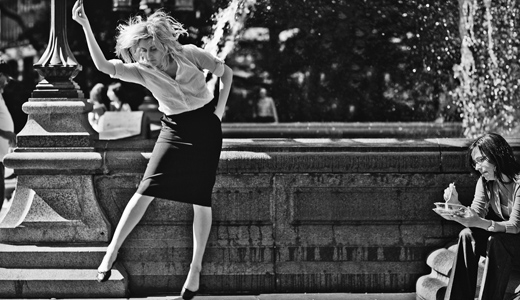 New York girls acting New Yorky (drinking too much on fire escapes, wearing giant eyeglasses, playing ukulele in the park — that type of thing) is starting to seem like a genre unto itself. But despite an appearance by Adam Driver of “Girls” fame, the new film “Frances Ha” easily distances itself from others in this set.

Shot in black and white, the comedy better resembles the sharply written, character-driven gems from the heyday of indie film. In fact, “Frances Ha” sometimes looks and feels like it could have been the follow-up to 1995’s “Kicking and Screaming,” the promising debut that took its director, Noah Baumbach, about a decade to live up to (with 2005’s excellent “The Squid and the Whale”).

This latest offering covers familiar territory for Baumbach, who is at his best depicting post-graduate malaise and inertia through characters who can’t or won’t find their place in the world. In Baumbach’s previous film “Greenberg,” Ben Stiller as the title character says of his career plans: “I’m trying to do nothing right now.” This time it’s Greta Gerwig in the title role. While at a dinner party and asked what she does, Gerwig as Frances says that it’s hard to explain, “because, I don’t really do it.”

Gerwig, who happened to play Stiller’s love interest in “Greenberg,” is the real life girlfriend of Baumbach. But to say she’s become the director’s muse would be a disservice to her. This is because “Frances Ha” is Gerwig’s film as much as anybody’s. A co-writer of the screenplay, the actress and character become inseparable, fused by a performance that is lovable in its gawkiness and mesmerizing in its self-effacement.

Gerwig is just over-the-top enough as a graceless, wannabe dancer who flops and lumbers around the city with what one friend aptly calls “her weird man-walk.” The character lives by a code that the rest of the world doesn’t seem to recognize, rendering her “undateable” (as the same friend, Benji, puts it).

Frances quickly finds herself in limbo, watching as the lives and careers of friends blow by her. The language used to tell this story, both verbally and visually, is a strength of the film. Baumbach and Gerwig employ a generational, urban shorthand that works, regardless of whether you spent your 20s in New York. In one scene, while tending to her storage facility, Frances is forced to leave a chair on the street with a sign stating (something like): “Free chair. Works fine. No room.” On the surface, this detail is relatable to New Yorkers of a certain age and tax bracket (in a past life, my apartment there was entirely furnished with items found on the street). On a deeper level, with a quick and tidy use of film, we witness the shedding of skin, cycles and transformation, Frances finally passing on to the next New York soul things that no longer fit.

Not every moment hits. Frances saying, “I wish we had cookies. Chessmen,” is probably funny to Pepperidge Farm fans, but to everyone else, the line just sort of hangs there. More often than not, though, the exchanges ring true. When receiving the tour of Frances’ charmingly decorated new apartment, Sophie, the best friend who once left Frances twisting in the wind, tries to sound unimpressed with “I don’t know, the place just seems so aware of itself.”

Such a New Yorky thing to say!