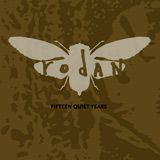 Comprised of the Aviary demo, the oft-bootlegged “Peel Session,” 7-inches and a series of live recordings of various calibers, Years documents seminal Louisville band Rodan from their formative years to the end of their all-too-short career. The Aviary tracks are particularly raw, crackling with an energy that seems barely contained by the tape. The comparably sluggish “Shiner 92” perfectly illustrates Rodan’s growth when compared to the Rusty version of the same track. This is made even more apparent on the live portion, which serves to confirm both their skill as performers and their ability to improvise on the fly. The bombast of “Peel Session” track “Before the Train” punctuates a career cut short yet full of promise. Still, tracks like “Tooth Fairy Retribution Manifesto” or “Martin” are poignant reminders that Rodan could absolutely rip.