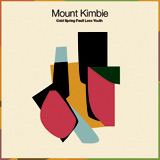 Cold Spring Fault Less Youth represents a serious sonic expansion for a duo once labeled as “post-dubstep.” Live instrumentation and vocals provide depth and warmth not seen on their debut, Crooks & Lovers, and only the militaristic march of “Made to Stray” is anywhere near dance-floor-ready. This album demands headphones and undivided attention, and greatly rewards both. Cold Spring revels in the unsettling beauty that lies at the crossroads of form and formlessness, but the experiments that lean more toward the latter ultimately become its weakest points — especially when juxtaposed with the group’s deft songwriting ability, as on opener “Home Recording.” After a near-flawless first half, the album begins to lose steam just before King Krule’s second guest spot. Once they’ve honed the novel techniques on display here, Mount Kimbie will have few peers.