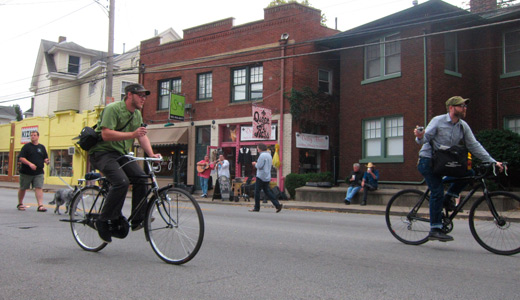 Louisville has seen its share of open-street events — from the annual PARK(ing) Day, which turns metered parking stalls into temporary parks, to last October’s cycLOUvia, which closed off a 3-mile stretch of Bardstown Road to cars and allowed only pedestrians and cyclists. Such events are individually praised for their quirkiness and community-building spirit. Collectively, they fall under the umbrella of “tactical urbanism,” a term used to describe temporary, low-cost efforts that advocate long-term changes to city environments.

Mike Lydon is the Brooklyn-based founder of The Street Plans Collaborative, which has released two handbooks on tactical urbanism. He’ll be in Louisville Friday for a Sustainable City Series roundtable discussion, sponsored by the Urban Design Studio, Vision Louisville, and the University of Louisville. The following day, a “streetscape intervention” and block party will be held on East Market.

LEO: In the last few years, interest in urban planning issues, especially with bicycles, has increased. Why the surge?

Mike Lydon: I think there’s been a lot of information that has finally been linked to the built environment. People are asking, “Why do I drive so much?” or “Why am I unhappy with all the driving I’m doing?” and thinking about the challenges of driving in a built environment. The Baby Boomers are looking to have less things to maintain — houses, lawns, space, all that — when they retire. People coming out of school now are not just delaying moving to the suburbs but choosing to live in cities. We have also seen a lot of pop culture and working trends (change). My parents’ generation grew up watching television shows primarily located in the suburbs, whereas in the current generation, most of the popular sitcoms, like “Friends” or “Sex and the City,” were or are all about urban centers. There’s a large confluence of factors that have inspired people to understand urban planning and issues of urbanism.

LEO: In the “Tactical Urbanism” guide, you cite examples from all over the country and world. Are there any defining characteristics among these communities?

ML: They tend to be in older places — for example, downtown Louisville, or a neighborhood that used to be connected to downtown through a streetcar. There are certain physical characteristics — having a higher density, having a gridded street already in place, already being set up as walkable because they were developed before the car. That can happen in a small town with 5,000 people and a few main streets, or a place as large as New York. When those physical characteristics exist, events that are small and short-term have a larger impact. If you’re way out on an eight-lane suburban arterial roadway with buildings set way back from streets with lots of parking lots, then it’s really hard for people to even imagine change.

LEO: How do these small-scale projects make a larger impact?

ML: For so long the planning process was geared toward heavy-handed, larger-scale change, or permanent change: “Here’s a list of all the things we want to do in the next year, or five, or 15 years.” In a lot of ways that disconnects people from the opportunity to understand what it actually means. Most people are not trained as professional planners who can read a plan document. Maybe they’ve just seen too many proposed renderings in Photoshop and not enough change to understand what’s possible. Tactical urbanism allows for lots of smaller-term iterations or versions of a project to be tested out. A lot of people who aren’t going to show up to a meeting at city hall at 6 o’clock on a Tuesday for a whole wide variety of reasons will certainly walk by on their way to the bus stop, or on their drive to work will go to the corner store, and they can notice change, react to it, and understand it.

LEO: What could city planners do better?

ML: Again, there’s been a great frustration with how slow planning can be. If you look at a city’s zoning code and the ordinances on the books, a lot of the time they have been there for 50 or 60 years. They either haven’t changed or the regulations have become convoluted over time. It can be very difficult to get anything done efficiently and effectively. Part of what we’re working on now with cities is looking at how they deliver projects and redesigning that process so it can be more nimble, more responsive, a little cheaper, and a lot more impactful. That’s a really critical part of this. What we’ve found is most of these politicians and the bureaucrats working in these departments are just as frustrated as everyone else.

LEO: Not all tactics are legal or sanctioned. Earlier this month, someone in California was arrested for painting crosswalks at an intersection he believed was dangerous. How do you balance advocating urban change with the desire to stay out of jail?

ML: There is a line to walk. If you are a citizen taking action, you have to recognize the risk. We’ve only seen in our research a couple examples of arrests. It doesn’t happen often, but it can. When it does, it tends to raise a whole lot of awareness around the issue, which is part of the point. Communities tend to galvanize around issues exposed through citizen-led action. Ultimately, it opens up the dialogue. These are people who are civically oriented and taking action because they want positive change. They’re not out there defacing property with graffiti; they’re out there trying to make a difference in their community.

LEO: What is the typical reaction from city officials?

ML: …The sticking point for cities tends to be their own processes in making change and liability issues. If a citizen goes out in the middle of the night and paints a crosswalk and, for whatever reason, somebody trips on that crosswalk, the city is concerned about being liable… It’s a valid concern and those are typical pushbacks, but there are certainly ways around that. I think there’s also a big blind spot in cities with environments that aren’t friendly for people and aren’t safe for walking and biking. The status quo condition is already causing crashes. People are getting hurt and injured based on that. There’s no liability concern for people already dying in places set up for dangerous mobility. That’s a perspective change that needs to happen.

Events are free, but registration is recommended for workshop. Visit udstudio.org for more info.