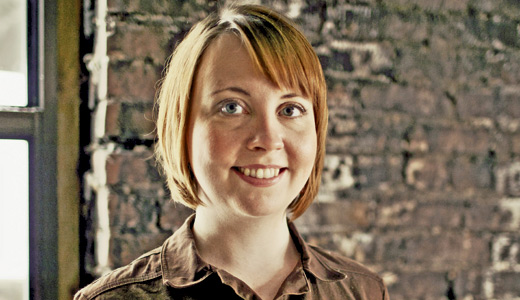 Louisville is famous for its literary scene. From the well-stocked shelves of Carmichael’s to the rigorous MFA in creative writing program at Spalding University, the city has long established an enduring relationship with the written word. But beginning June 17 at 7 p.m., this celebration will take to the airwaves as well with the debut of 89.3 WFPL’s new program “Unbound.”

The brainchild of news and editorial director Gabe Bullard and arts and humanities reporter (and poet) Erin Keane, the program features two writers of short fiction reading their work in each 30-minute episode. Produced and hosted by Keane, “Unbound” promises to be the next big thing for readers in Louisville and beyond.

The concept is simple, says Keane. “I really love hearing a writer read his or her own work in their voice. You get to hear the rhythm of their sentences, the way they hear them in their brain when they are writing, and that’s something that can just make listeners feel closer to writers. And something that I’m always interested in is encouraging people to be more active readers — to buy more books, to read more books, to become fans of contemporary, living authors.”

Each episode will have a theme, ranging from the seemingly straightforward but entertaining (“Bad Luck”) to the quirky (“Nightclub Jitters”). First up is “Car Trouble,” featuring work by Southern Indiana’s Frank Bill and mystery-horror writer Jamieson Ridenhour.

Through her deep reservoir of contacts and goodwill in the literary community, Keane has attracted a wide swath of talent both from Kentucky and beyond. “We have great writers in Kentucky and nearby, so why not call on them to feature them?” she says. “But I really wanted to pull in (even) more interesting folks that are out there publishing these days, and really just get a variety and mix of voices in there.”

Regional diversity is essential to Keane, both for storytelling and the writers’ voices. “You get to hear different accents, and I think that’s so important. Oftentimes, when you hear the audiobook version of things, it’s like there can sometimes be a flattening out of that (accent). Writers — some of them have idiosyncratic voices. Some of them sound a lot like the way they write. Some of them might be a little surprising. Not everyone in here is a great performer necessarily, but they all have distinctive voices.”

The entire season — 10 episodes — is in the can, so Keane and company are offering it to other NPR member stations for syndication throughout the country. “What we’re hoping is we’re putting together a really cool package of writers that’s going to appeal to stations in a lot of different markets.”

In addition to Bill and Ridenhour, other writers who will be featured on “Unbound” include Holly Goddard-Jones (“The Next Time You See Me”), Justin Torres (“We the Animals”), Silas House (“Eli the Good”), Claire Vaye Watkins (“Battleborn”) and Neela Vaswani (“You Have Given Me a Country”).

While “Unbound” was largely underwritten by WFPL, with generous support from Spalding University’s BFA and MFA in creative writing programs as title sponsor, there were extra production costs. To supplement their budget, Keane and Bullard turned to crowd sourcing and social media, soliciting donations on Kickstarter. With a goal of $4,000, they were surprised when they exceeded it by more than $300 from 150 backers.

“I think that’s really amazing,” says Keane, “that we have 150 people who are giving anywhere between $1 and $250 … saying we really want to make this show happen. It shows that old adage … every dollar counts.”

Her dream for the program is simple, she explains: “My big lofty goal is that someone is driving to Target to pick up cat food and they hear a story, and they can’t get out of the car until the story’s done,” Keane laughs. “And then they immediately run down to the bookstore and they order their book, and they discover their new favorite writer through the show.”

And if other NPR affiliates across the country decide to pick it up along the way, she says, then that will be gravy.