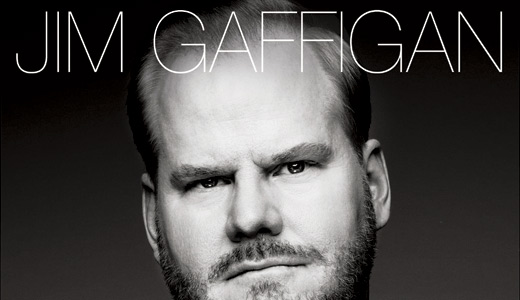 Jim Gaffigan has made an impressive career by getting audiences laughing about American bad habits. Food choices and lazy lifestyles are two of his key topics, and Gaffigan’s appraisal of the microwaveable convenience food Hot Pockets is a classic. His first home is on comedy club stages, but he’s not afraid of newer means of presentation. There have been some notable acting gigs in both movies and series TV, and recently he took to the Internet to market a DVD of his stand-up act.

Now comes the literary Gaffigan. His first book, “Dad is Fat,” just hit bookshelves. This collection of dozens of short essays revolves around parenthood in general and draws examples from the comedian’s home life, which features five young kids, a tiny New York apartment, and a wife/mother who keeps everything together.

Carmichael’s is hosting Gaffigan tonight for a reading/signing. He recently answered some questions from LEO while preparing to hit the road for a series of book promotion events. When asked what difference he experienced between these and stand-up dates, he said in his offhand, low drawl, “There’s no drunk people at book signings. That’s not to say that people that enjoy my stand-up are huge drinkers, but there’s something about the book world that seems less of a night out for partying and more about people (who) have conversations in the grocery store.”

LEO: That might be your experience because your book isn’t like “Fifty Shades of Gray.”
Jim Gaffigan: The book-publishing world is really fascinating. Look, if you go to the Amazon Top 100 authors, there’s a lot of erotica authors in there. It’s not David Sedaris and Malcolm Gladwell. There’s a lot of authors who have guys with nice abs on the cover. That’s not for me.

LEO: Well, lifting five children has got to do something for your abs, right?
JG: It should do more, probably. But then again, I just enjoy eating too much, I guess.

LEO: Do fans try to feed you Hot Pockets?
JG: They definitely try to feed me a lot — which is a good and bad thing — at stand-up events and book events. It doesn’t help when I’m going to Louisville … which is kind of a bacon-and-pork destination, isn’t it?

(At this point the interviewer provided a description of the Hot Brown and then burgoo, about which the comedian-author said, “I’m all over it.”)

LEO: Your five children: How much of their food do you end up sharing?
JG: Having little children and eating around them is like the opposite of the Jenny Craig Diet. If they won’t finish a plate of french fries, you’re forced to either let a plate of french fries sit there uneaten — which I believe is illegal in some states — or you end up eating your kids’ leftovers.

LEO: In “Dad is Fat,” you often write about the genius of your wife. How many of the words we read here did she help you choose — and if you move forward with another book, is she getting a co-writer credit?
JG: Obviously in this book, it being my point of view — and that of a father — it wouldn’t make sense for it to be “Jim and Jeannie Gaffigan.” But she had a huge influence on this. We write everything together; it’s totally a collaboration. The next book — which we’re already kinda talking about; it would be about food, which is a topic I know very well — would be definitely by both of us. The sections about her she definitely didn’t write. But a lot of the collaboration, of even the stand-up act, is kind of indistinguishable … We live in such a state of chaos that it’s all a blur at this point.

LEO: How does the workstyle of writing these essays compare with writing stand-up material?
JG: It’s a completely different task. You know, stand-up’s all about removing words and trying to communicate things in the quickest manner — whether it be in the facial expression or a vocal tone. But these essays … many were inspired by tweets I came up with, or me and my wife came up with. And so our approach would be to make sure we’re done — got all the meat off the bone. But also not just blabbering on. I’ve read a lot of books by comedians about parenting, and I wanted the book to be very observational. There was a lot more (auto)biographical information than I expected at the beginning. I know that we live in a day and age where we’re an exhibitionistic or voyeuristic society where reality shows and exposés about people are very prevalent. I’m a relatively private person, and I wanted to talk about parenting in a humorous and universal way where we can all identify with it.