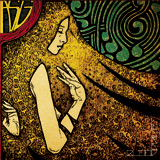 As groups inspired by Black Sabbath go, ASG have always been one of the most inspired. Their secret weapon lies in the powerful pipes of singer/guitarist Jason Shi. His soulful tone adds a heartfelt depth to the eclectic songs of Blood Drive. ASG have plenty of heavy, gargantuan riffs to spare, but it’s their thriving bluesy flirtations that truly cement this with a sense of identity. Beyond blues, their North Carolina roots shine, with country and rock elements appearing throughout. Their Southern edge figures prominently into tracks like “Earthwalk,” a slow burner that develops a gorgeous indie-rock chorus, eerily channeling Smashing Pumpkins. By the time the somber twang of closer “Good Enough to Eat” rolls through with a psychedelic pulse, you don’t want the trip to end. But end it does, leaving only one clear choice: Hit replay.