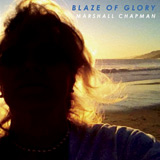 After releasing her previous album, 2010’s acclaimed Big Lonesome, which paid tribute to her friendship with the late, great Louisville singer-songwriter Tim Krekel, legendary Nashville hellcat Marshall Chapman turned southward, spending time and finding her muse for new material in Mexico. The heat from that country seems to have seeped into her pores, because Blaze of Glory is a scorcher. From the album opener “Love in the Wind,” a duet with fellow Music City rebel Todd Snider, to the ending title track, Chapman tears her way through the album, her searing voice lingering over the Hoagy Carmichael/Ned Washington classic “Nearness of You” and the groove of her own “Let’s Make Waves.” Backed by a smoking band that includes famed guitarist and songwriter Will Kimbrough, Blaze of Glory will burn your ears and feed your soul.