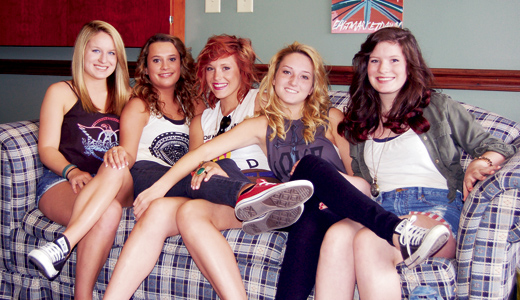 Last week, the five young ladies who have performed together over the last nine years as The Hi-Tops came to the LEO office. It’s not every day a quintet of girls, all wearing coordinated Chucks, shows up here, and they’re certainly the only quintet this music department has watched actually grow up.

The legend’s not all true, though. They switched from hi-tops to lo-tops a while back, but still uniformly wear the latter together for band events (even in an interview only being witnessed by a handful of LEO staffers). Also, bassist Bayley Whitlow just turned 15, so she’s not going anywhere yet.

It all started in third grade. Ally Whitlow (keyboards) and Remi Maxwell (vocals/guitar) watched the movie “Freaky Friday” — the Lohan version, which featured her character playing in a band called Pink Slip. The duo wanted their own Pink Slip, so they recruited Madi Cunningham to play drums. Jessie Madill was the new girl in school, and the group was excited to learn she played guitar. Needing a bassist, they finally came to young Bayley.

Maxwell’s father Mark is a musician and the owner of Mom’s Music. He has coached the band, pushing them to improve even if it meant making the young girls mad at times. Today, they all appreciate his efforts, as well as their other parents, manager Kim Elliot (a Whitlow aunt) and producer Michael Sanders.

Their advice for young bands: Keep trying, even if at first you suck. They thank their fans for supporting them through the years. Now the original quartet is all off to college around this region, except for the California-bound Maxwell, who hopes to stay in music and succeed as a performer.

Nine years can be a long life for any band. The Hi-Tops said at the beginning that they would stick together until college, whether they made it big or not. They achieved that goal, and the friendships and unique experiences they’ve shared is definitely a success story.

Their final gig, a free show, is Sunday at the Jeffersonville RiverStage at 6 p.m.