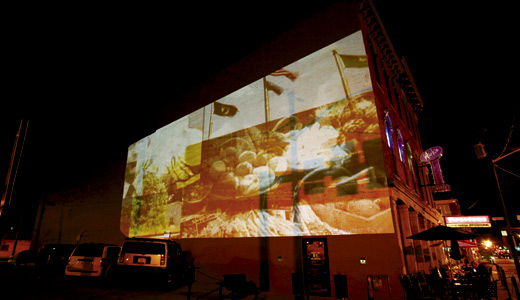 In 2009, when New Albany began a multi-year public art project to celebrate its bicentennial four years later, it was hard to know what to expect. Today, as the four artworks of the project’s ultimate year take their turn amid the downtown landscape, a few more things have come into focus.

New Albany generally likes public art and seems able to tolerate non-literal work. By and large, that work — 15 pieces overall — has been compelling, thought-provoking and memorable. And the experience has planted enough interest to start a conversation about another round of public art, perhaps addressing contemporary New Albany issues.

The 2013 entries, plus five from prior years that remain in place, are the focus of a public art walk on Saturday. The nine artists will be on hand to discuss their works, and walkers can, among several planned activities, make their own screen-printed poster, designed by Ron Jasin of Madpixel Art and Design. A couple of this year’s entries are particularly fun and likely to command extra attention because of their sheer prominence.

Georgetown, Ky., artist Boris Zakic’s “Painting,” a singular piece spread across four large canvasses hanging on the west side of 109 E. Market St., is from a distance a sea of pleasing magenta accented by dynamic dollops of gray and white and green (not quite aqua, not quite turquoise).

Zakic’s piece celebrates New Albany’s visual arts past, specifically painter George W. Morrison, though Zakic says it grew into an exploration of painting itself. He and a crew of art students enrolled in his Impasto Mannerisms painting class at Georgetown College have accomplished something extraordinary with their paint on treated canvas, sprawling some 66 feet in length and 22 feet wide. (Make sure to check out the YouTube video showing a time-lapse installation.)

Step closer (but not too close) and “Painting” comes alive in new ways. The massive “brush strokes” certainly say “painting,” and the inferred left-to-right motion suggests a jackrabbit hauling ass. Or maybe it’s an antelope.

Tiffany Carbonneau’s “New Albany Now,” which interprets the theme of New Albany’s museums and history, will also turn heads, as video installations tend to do. Even with a streetlight mucking things up as New Albanian Carbonneau tested the video on a recent evening, everyone leaving Wick’s Pizza couldn’t help taking a curious look.

Invoking the YouTube phenomenon, which has transformed regular people from passive viewers into active participants in telling their own stories, Carbonneau highlights New Albany’s recent past from a decidedly non-museum point of view. The video collage, sans audio, mixes archival footage from an old local cable TV station with recently submitted videos from citizens, creating an amalgam likely to start many quizzical conversations.

The sculpture “The Stage That New Albany Built” by Lee and Betty Benson of Jackson, Tenn., which sits on the lawn at Riverview Towers apartments at 500 Scribner Drive, represents performing arts and entertainment. Moving right to left as you look from Scribner, the lumber proceeds from chaos to order and turns into the sort of stage bowl that many communities, including New Albany, enlist for outdoor summer entertainment. After the piece is dismantled in two years, the wood will be donated to Habitat for Humanity.

And “Sacks of Food,” by New Albany artist R. Michael Wimmer, celebrates the city’s culinary past. Hanging in giant shopping bags from the rafters of the farmers market building at Bank and Market streets, the whimsical, oversized painted Styrofoam pieces recall a time before electricity and refrigeration, when “buy local” was a true imperative. Wimmer will continue adding pieces throughout the market season to give people something to look for on return visits.

Public art has been hot for a while, and the New Albany project is a good example of how it’s changed, says Juilee Decker, an associate art history professor at Georgetown College. The days of “plop art” — putting up a statue of a hero on a horse, for example, and leaving it there in perpetuity — have given way to site-specific and often temporary exhibits that draw from the avant-garde. That makes the work more relevant and interventionist, she says, and gets people excited about artwork they know won’t be around forever.

“That’s wonderful, because people think of the space in a new way,” Decker says. “It’s gone from a static view to a more active view, and individuals feel they have some say. I think people respond to that. We’re so saturated with images and visual culture anyway that it’s exciting to engage with a work of art directly and not have a preconceived notion about it.”

Karen Gillenwater, curator at the Carnegie Center for Art & History, one of the project partners, says it’s been a gratifying four-year run. “It’s really rewarding to see people talking about art in New Albany,” she says. “At first, some people said it wasn’t what they pictured, but once the first work was installed and they met the artists and lived with the pieces, they responded. “It brings up memories, so they make a connection personally, and it gives them a pride in their community. It gives people a sense that this place is loved and cared for. And a lot of people tell me they wish the pieces could stay up, which I think is the biggest indicator of the project’s success.”

And, Gillenwater adds, the momentum could continue as the stakeholders talk about where to go from here. They’re considering inviting artists to create art installations to interpret and create a community conversation about issues that will impact New Albany today and into the future.