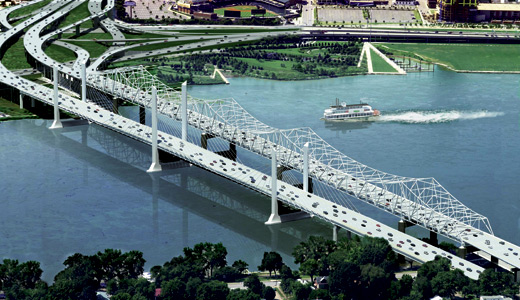 At a recent breakfast held at the Muhammad Ali Center, Kentucky Gov. Steve Beshear congratulated a conference room brimming with the city’s elite business class, thanking them for their continued support of the controversial Ohio River Bridges Project.

“Businesses throughout this region have not only provided a steady drumbeat, but a loud drumbeat of support that has helped us to reach this point in the history of these two states,” Beshear told a crowd assembled by Greater Louisville Inc., Louisville’s chamber of commerce. The group had spent $350,000 in lobbying the project to Frankfort, in addition to $2 million raised by the Build the Bridges Coalition for advertising and lobbying purposes.

“You have nudged, needled, poked and prodded until we got this deal done,” he said.

That the governor’s remarks came just days after the online newsmagazine Grist named Louisville one of the top 10 cities “most screwed” by climate change was a point most likely lost on this crowd. Instead, they were busy with the kind of self-congratulatory end zone-dancing that has dominated the rhetoric of elected officials relative to the $2.5 billion infrastructure project, and ever-focused on the economic effect of increased motor traffic in Kentuckiana.

Despite mounting scientific evidence that Louisville is the fastest-heating city in the nation, regional leaders including Gov. Beshear, Mayor Greg Fischer and U.S. Rep. John Yarmuth, D-3rd, have doubled down on the project’s designs for more jobs by way of more asphalt, more vehicle emissions and more urban sprawl.

The aforementioned Grist article took its inspiration from Georgia Tech’s Urban Climate Lab, particularly the work of its chief researcher, Brian Stone, an associate professor in the City and Regional Planning Program of the Georgia Institute of Technology. Stone’s work has been featured in articles in The Courier-Journal and WFPL over the past year, citing his 50-city study of the so called “urban heat island” effect, whereby urban areas heat faster than their rural counterparts due to lack of greenspace, urban development patterns, and other criteria. What Stone & Company found was enough to make your blood boil: Louisville is the fastest-heating city in America, boasting an average .83-degree rise in temperature from 1961-2010. That’s higher than both the global average (.30 degrees) as well as the U.S. urban average (.56 degrees).

According to Stone’s research, a key contributing factor to such heating is the lack of tree coverage, which can — in substantial enough levels — reduce urban temperatures. Unfortunately, it’s yet another criteria where Louisville lags: A May 6, 2012, Courier-Journal story ranked the city last in terms of metropolitan tree canopies, placing behind similarly sized cities like Nashville, Annapolis, Md., and Montgomery, Al. Mayor Fischer recently announced he would fund and recruit an urban tree forester pending the outcome of the 2013-2014 Metro budget, which is slated to be finalized by the end of June.

But aside from other factors unique to Louisville, such as the valley effect, a key component of Stone’s work discusses the relationship between urban sprawl and rising urban temperatures. In a 2006 paper, Stone found evidence of a strong relationship between metropolitan areas with greater sprawl and higher exceedances of ozone emissions than more compact urban areas.

And according to some critics of the bridges project, which many contend will facilitate sprawl in the East End, the city is doing little to combat a rise in the factors that contribute to the overall heat island effect, much less mitigate a reduction in vehicle emissions facilitated by extra roads.

“‘The bridges project on the east side is just a piece of the sprawl machine,” says environmental activist Jackie Green, likening the developers who ostensibly support the East End bridge to “greenfield destroyers.”

Green believes the city agency created to address these issues, the Office of Sustainability, is unable to effectively combat the increased traffic and sprawl likely to be wrought from a completed Ohio River Bridges Project. He says the East End bridge will drive up unsustainable development in that area of the city.

“The sustainability plan calls for a reduction in driving,” Green says. “But how do they do that? By building more roads? By getting us farther and farther stretched out across the face of the earth? By sending water and sewers to counties beyond Jefferson? You don’t do sustainability without doing public transit and density well, and we’re not going to those places.”

A 2009 University of Toronto study affirms Green’s assertion on road building, which examined U.S. traffic data from 1835 to the present and found a direct correlation between increases in road capacity and increased traffic in terms of vehicle miles traveled. (Perhaps ironically, the same study reported that increased public transportation options would only have a marginal effect on traffic congestion, and recommended tolling urban roads as the only surefire measure to reducing vehicle miles.)

The Metro Office of Sustainability’s March 2013 master plan mentions the heat island effect several times, up to and including bolstering the city’s tree canopy, but is silent on the issue of sprawl save for a mention of the city’s Land Development Code, which would be changed to incorporate sustainability language sometime this year.

The plan also calls for reducing vehicle miles traveled by 20 percent by the year 2020, but does not recommend tolling as a means to achieve that goal.

Maria Koetter, director of the Office of Sustainability, says she is “very involved” with the push to acquire an urban forester, and that the earliest the city can move to hire one is July 1, after budget season for this fiscal year is closed.

When asked how the bridges project affects the city’s goals toward sustainability, Koetter says the bridges are “more of a regional matter” and that her office’s focus is on “city issues, specifically those identified in the sustainability plan.”

“The deal with the bridges is that it moves the traffic from here to there, and having more routes of transportation I’m not convinced is necessarily bad for the environment. There’s the same amount of traffic whether you have two bridges or 10 bridges, right?”

When asked about the idea of induced demand, and the findings of studies like the University of Toronto report, Koetter declined to comment further.

“With respect to the goals of the sustainability plan, that’s not really connected at this time,” she says. “We all want clean air, and we’re a long ways away from having any specific data on what’s going to happen with the new bridges with respect to traffic increases.”