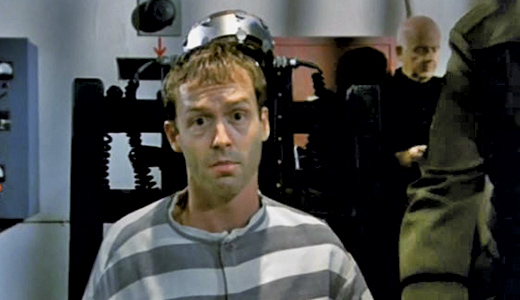 Nicely cleaned up Blu-ray release of a bloody, all-but-lost slapstick comedy from Sam Raimi. In his follow-up to “Evil Dead” — written by the Coen Brothers! — a pair of dim exterminators quit the bug business and set themselves up as professional hitmen, leading to all manner of inspired Looney Toons comic mayhem. Paul Smith, Brion James and Louise Lasser are crazy fun as the leads, but Bruce Campbell walks away with the film as “Renaldo, ‘The Heel.’” A truly inspired, legendary mess of a film that should be on everyone’s video shelf. Our highest recommendation.

To us, well-hootered Alexandra Daddario from the “Percy Jackson” series is the best reason to watch this rebooted horror, originally shown in 3-D. She plays the surprised new owner of an ornate old mansion, the site of historic atrocities that led the townsfolk to exterminate her then-unknown relatives in 1974. But something has survived in the cellar. Bwahahaha! Can’t hold a candle to Tobe Hooper’s 1974 original, but bloody good fun.

A GLIMPSE INSIDE THE MIND OF CHARLES SWAN III

Charlie Sheen returns to the big screen, bringing a passel of friends with him. He plays a rich, charming, successful man in love with Maxim babe Katheryn Winnick (Hannah Burley from “Bones”), who summarily dumps him. The rest of the movie is spent swirling the bowl with support from buds Jason Schwartzman and Bill Murray, and sister Patricia Arquette. Written and directed by Roman Coppola, this exploration of the notion that you can both love someone and hate them at the same time is an unmitigated mess, but an entertaining one thanks to Sheen’s notorious charm and lots of eye candy. We enjoyed it.

Just about everyone in Hollywood stars in this massive three-hour multi-threaded time-shifting drama that spans multiple generations and 500 years. The overarching theme is that everything in the universe is connected, from a 19th-century ocean voyage, to a murder at a nuclear plant, to life in a nursing home, to a clone escaping her bonds in future Korea, to daily survival in Hawaii after the apocalypse — and that’s just the highlights! A long, complex look at a love literally for the ages from Tom Tykwer and Andy and Lana Wachowski. Good, but best viewed over several nights.

A group of amazingly fresh, beautiful — and let’s just say it: limber — teens from different backgrounds and socioeconomic classes come together at a tough, er, dance academy. The same Aussies who brought us the excellent teen series “H20: Just Add Water” continue their streak as the young people interact in surprisingly realistic ways, selling the innocence and universality of their dreams and fears while dancing their cute little hearts out. You can’t help but love ’em. Seen in America on the Nickelodeon Channel; seasons 1 and 2 now available, each broken into two volumes at $15-$20 each. Great stuff.

This season finds sister Debra witnessing one of Dexter’s kills, causing Michael C. Hall’s mild-mannered serial-killer killer to take a hard look at himself, while the audience is torn between exploring his (and their own) need for blood and Deb’s reaction to his Dark Passenger, born of their father’s code. Arguably American TV’s best-written drama, this season’s 12 episodes may be hard to top as the series runs headlong into its eighth and final season.

We’re really growing fond of Swedish films, even lesser-budgeted nonsense like this. Too-young-looking Signe (newcomer Isabel Christine Andreasen) has survived the Black Death only to be captured by a murderous gang of Medievals whose intentions for the spunky beauty are clearly unhealthy. She escapes with the hoard in hot pursuit. The crazy cast includes Gaahl (stage name of Kristian Espedal, lead singer of God Seed), and leggy blonde supermodel Ingrid Bolsø Berdal. Entertaining as hell.

Emily Mortimer is absolutely brilliant in this biodrama of Leonie Gilmour, the American journalist, educator and mother to famed architect/artist Isamu Noguchi. Co-star Christina Hendricks (“Mad Man”) is certainly a distraction, but this is Mortimer’s picture from start to finish as she fearlessly strides through wars, cultures and men to experience art and demand freedom in the early 20th century. Empowering.

This biopic turkey is notorious for three things: (1) Lindsay Lohan as Elizabeth Taylor, (2) being an overreaching Lifetime cable movie, (3) the unbelievably cringe-worthy writing. That being said, it is also entertaining, something that too few Lifetime movies can claim. And not all that entertainment is due to Lohan’s simply terrible vocal delivery (visually she’s quite remarkable): Grant Bowler’s Richard Burton is good, and we truly enjoyed the always-reliable Theresa Russell as Liz’s mother, Sara.

As big-time professional writers (snort), we’re well acquainted with bipolar disorder, a common mental illness caused by a simple chemical imbalance that seems to often afflict artists, particularly writers. This award-winning doc looks at how society stigmatizes its sufferers, leading to isolation and pain — a reaction that would be unthinkable if the disease were, say, cancer or a broken leg. As a result, many hide their condition from even their closest friends and family; left untreated, it can become debilitating. An uplifting and overdue light on a subject too long kept dark.

This little indie is a delight. A driven teen filmmaker breaks into his high school one night to film his masterpiece. His cast includes his best bud, an oddly cute bookwormy girl, a bouncy cheerleader who never shuts up, a tall, quiet, intellectual girl who looks far older than her age, the local basketball hero, and an obnoxious drug dealer. And over the course of the night, they each reveal more about themselves, occasionally learning something in the process. The “Breakfast Club” references are obvious but loving. A treat.

3RD ROCK FROM THE SUN: THE COMPLETE SERIES

When this inspired lunacy hit the airwaves in 1996, it plowed new comic ground, turning the tired old sitcom formula on its ear. John Lithgow walked out of a successful movie career to become Dr. Solomon, college professor — in reality the manic leader of a frantic alien force investigating life on our planet. Kristen Johnston, French Stewart and Joseph Gordon-Levitt shine as his likewise-disguised troops, with Jane Curtin as the unexpected (and baffled) love interest. Winner of eight Emmys; funny as hell, goofy and wise in turns; a steal at this price.

A coming-of-age film of sorts from France (“L’âge atomique”) about two young men out on the town. One is desperate to kiss a girl, the other desperately wants to kiss his friend. A nicely fumbling character study of unsure-yet-cock-sure sexually opposite friends, intimately tied in ways they haven’t discovered yet. Very nicely done.

A profoundly Chinese look at WWII events that few Americans were ever aware of, directed by master filmmaker Xiaogang Feng. Adrian Brody and Tim Robbins comprise the American portion of the cast, caught amid the carnage as war between China and Japan rages. Hardest hit is Henan province, already reeling from a drought that has put most of its populace on a death march for food and water. With the misery and death toll beyond comprehension, a rich man and his serf struggle together to survive.

Movie version of the popular traveling two-man bio-drama about John Barrymore, arguably one of the greatest actors of all time, with Christopher Plummer channeling the master thesp late in his career after a lifetime of well-documented debauchery. John Plumpis plays Barrymore’s prompter and friend, serving as a sounding board for the elder’s musings and reminiscences. Plummer is magnificent in this well-written and lively look at a legend.

Recently canceled, this terrific actioner didn’t get anywhere near the audience it deserved. Yeah, it’s your basic police procedural, but the cops here are the Strategic Response Unit, a military-styled tactical team called into play whenever hostages are at risk, gangs are involved, bombs are suspected or a slippery building needs scaled. Stars former Pink Ranger Amy Jo Johnson, an always welcome guilty pleasure of ours. (FYI: This is actually the tail end of the fourth Canadian broadcast season, the final season will be released later this year.)

The 20-season juggernaut of “Gunsmoke” wasn’t half over when James Arness, Milburn Stone, Amanda Blake and the rest made this season, so the series was in its “teenage” years: blustery and strong, tall and proud, sexy yet innocent. For example, in the first episode, Sheriff Matt Dillon must travel alone across a deadly stretch of prairie to save a ranch hand paralyzed and helpless after a horse throws him. No writer working today could have turned that one-note synopsis into a thrilling one-hour drama with such soul. Our favorite, however, may be “Call Me Dodie,” starring a young Kathleen Nolan as a runaway orphan. Simply the best drama series ever made. Buy it.

HAVE GUN WILL TRAVEL: THE SIXTH AND FINAL SEASON, VOL. 1 & 2

The too-short short six-season life of HGWT was a white-hot crucible where some of cinema’s biggest stars joined with as-yet-unknown actors to produce as deep and solid a drama series as TV ever produced. Craggy star Richard Boone was Paladin, a former West Pointer, now working as a quiet, moral gunslinger-for-hire in post Civil War America — in short, the perfect anti-hero, a man who quoted Shakespeare, drank fine wine and taught harsh lessons among those who would take advantage of a lawless age. Watch for a young Charles Bronson as Sheriff Jim Redrock, an Indian and respected member of the white community, always at odds with himself and his less-tame brother. Worth any price.

This no-budget thriller/comedy takes the “drunken Las Vegas bachelor party” genre into scary places when the guys get in deep with some strippers who not only take their clothes off, but harvest black-market organs from the patrons! A silly bit of bloody fun.