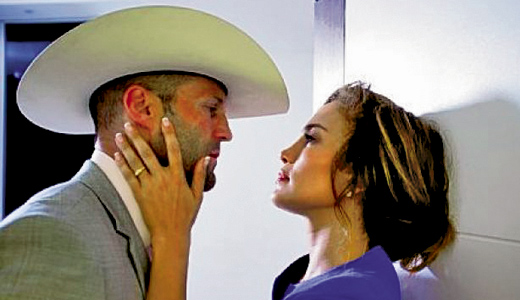 Jason Statham is in his element here in just another tough-guy-with-a-code-to-live-by actioner. After being left for dead, he tracks the baddies, led by Michael Chiklis, to Palm Beach where the movie immediately changes gears as Jennifer Lopez steps into the mix. Bottom line: This is a Jason Statham movie. There are bad people and good people, always well delineated, there are hot women, there are fast cars, there is lots of impossible gunplay. Of course we liked it!

Arnold Schwarzenegger steps back into the genre he invented decades ago. Yeah, he’s decades older, none the wiser, and hip-deep in L.A. gangs, drugs, kingpins, gunfire, hopped-up cars, sexy hostages, private armies, and FBI agents led by Forest Whitaker. Peter Stormare makes a chilling mercenary, and Jaimie Alexander is one hot hostage (she’s also in this movie). One of the dumbest things we’ve ever seen, but given the genre, that’s not meant as a slight. Big Dumb Fun on a scale they haven’t made since back in the day; our kinda flick.

Oscar boy/The Mandarin Sir Ben Kingsley plays a chilling terrorist — an invisible, average citizen whom no one could imagine as a mad bomber — in this oddly PG-rated ripped-from-the-headlines thriller. Why haven’t you heard of it before? It’s a “revenue flick” filmed in Colombo, Sri Lanka. Not the greatest film we ever saw, but anything with BK in it is OK by us; with Ben Cross, both of whom really need new agents.

This little seen tale from two decades ago has a plot similar to 2011’s “Captain America: The First Avenger,” but none of the budget, starring Matt Salinger (son of J.D. — really!) as Cap with help from Ronny Cox (“RoboCop”), local-boy Ned Beatty, Darren McGavin and Michael Nouri. The film is mess, but only because the producers refused to put a dime into it. The cast, however, gave it their all, and the film is damn fun to watch. All previous releases were on murky VHS, but this is a pristine Blu-ray with some nice bonus goodies. Belongs in every Marvelite’s video shelf.

We love anthologies, and this generous mix of the supernatural, sex and silliness has been a guilty pleasure of ours for some two decades now. A trio of frantic men find themselves playing blackjack, and each new card advances the tale of how they arrived at this point. Not really a terrific film by any means, starring no one you ever heard of, but entertaining nonetheless with a slam-bang finish.

Katia Winter (“Dexter’s” Nadia) takes down her philandering boyfriend (Matthew Settle from “Gossip Girl”), forcing him to experience an entire year’s romantic holidays over a single weekend, locked in her isolated country house where no one can hear his cries of happiness. Veteran thesps Charlotte Rae and M. Emmet Walsh help to keep this classy.

In 1984, the government creates a killer fungus to wipe out cocaine fields, but it has a teensy side effect: It feeds on human flesh! And it has infected everyone in the lab! And if it escapes, the entire world could perish! An old-school no-budget B-movie like they used to make back in the ’60s: no sex, no blood, lots of overacting and a focus on great on-set special effects. Fun.

An intriguing Hong Kong murder mystery about a famous pianist found dead, with his brutal murderer (Nick Cheung) easily identified — but it’s what happens next that makes this so good. As the detective (Simon Yam) digs deeper, he uncovers 20 years of lies and deceit, all pointing to a family secret too insane to imagine. Oh, and there’s plenty of gunplay, chases and chop-socky to tide you over between plot elements. Damn entertaining.

A few years ago, 5,000 Oklahomans reenacted the deadly D-Day Invasion of Normandy … using paintball guns. While you could argue that such a gathering — done as a game in which the Germans could win — disrespects and trivializes the sacrifice made by thousands of soldiers, you have to give credit to the makers of this doc who filmed it, then edited it all into a truly frightening and suspenseful pseudo-war-film in the best of Hollywood traditions. Includes lots of great commentary by those who lived through both battles.

“Glee’”s Chris Colfer, a high-schooler destined for big things, is struck, er, by lightning in the parking lot, proving that it is better to give than to receive 100 zillion volts. He dies instantly. The rest of the movie revisits his last few weeks of life, including a dark scheme with gal-bud Rebel Wilson (who is friggin’ hilarious!), his alkie mom (Allison Janney, “The West Wing”), his absent dad (Dermot Mulroney, “My Best Friend’s Wedding”), and Dad’s pregnant new girlfriend (Christina Hendricks, “Mad Men”). Colfer wrote this surprisingly funny dark coming-of-age drama when his was 18; definitely worth your time.

THE AQUABATS! SUPER SHOW! SEASON ONE

This admittedly asinine show is a guilty pleasure of ours, a goofy blend of live action, animation and music that reminds us of the “Banana Splits Adventure Hour” (1968) — with a bit of “Red Dwarf” thrown in for good measure — which never fails to lighten our spirits. Five shameless guys in low-rent superhero outfits mug at the camera and launch into over-the-top adventures peppered with fake commercials, space aliens, faux-’80s songs and supervillains. From the creators of “Yo Gabba Gabba!”; trust us, if you’ve never seen one of these, you are in for a geeky treat. A must-own for any age.

That purple monstrosity morphs into “BarneyT,” a hip-hop DJ to teach kids all about groovin’ to the music, whether it be klezmer, ballet or violent, bloody slam-dancing. OK, we made that last one up, but you get the idea. More than an hour of welcome wear-them-the-hell-out activity for harried moms.

A first-rate French look at first love. A young man (Jérémie Elkaïm) is having one last vacation at the beach with his family when me meets another young man, which leads to skinny dipping, which everyone knows is the gateway to dancing nekkid on the beach and painful sex amid the dunes (damn sand gets EVERYWHERE). But can any fire so hot burn for long?

Two episodes of a mesmerizing, long-running German-made police procedural filmed in Venice, Italy. Crime novelist Leon is a masterful writer, using the canals, culture and Neopolitan delights of Venice in creative ways to feed the investigations of Brunetti, a razor-witted detective, frustrated by the system and with zero regard for the rampant incompetence he sees around him. Episode 17 is a perfect introduction as he looks for the killer of a 10-year-old girl from a marginalized community that fears the police — and with good reason! Some of the most engrossing TV you’ll ever see; highly addictive, highly recommended.

A raw introduction to a real-life hitman for the Mexican druglords, a man who has admittedly killed hundreds, often after kidnapping and torturing them for days — some of them while serving as a state police commander in Chihuahua! Yet, despite having a quarter-million-dollar price on his head, he has never been charged with any crime, anywhere. Here, his face obscured under a black hood, he calmly explains, doodling on a white board, how he did it all for this Italian documentary. Chilling.

Eric Roberts (do we really need to go on?) leads this brain-dead action-comedy about “The Senator” (Roberts), a powerful Hollywood producer who concocts a plot to ruin his top Tinseltown competitor, “The Master” (Brad Light). And it all revolves around a briefcase that gets stolen by a pair of morons. Watch for Nectar Rose (her real name!); she played a stripper in “Independence Day” and was Lenore, the devoted love-bot in “Serenity.”

THE ABCs OF DEATH

The most ambitious horror anthology ever conceived: 26 short vignettes created by dozens of the world’s most celebrated genre writers, directors and actors, each focusing on the topic of death. A true “WTF?!” outing, the result is a surprising mess that veers from horror to comedy to torture to sci-fi to flatulence to child-rape to overeaters within its dizzying two-hours-plus. Is it any good? Well, some of it stinks, but with so much to choose from there’s literally something for every taste (assuming you’re a bit cracked).

The long-overdue Blu-ray release of one of the world’s best flicks, with one of the best-ever “bumpbump, ba bee da dumpdump” theme songs, courtesy of Elmer Bernstein. Steve McQueen, James Garner, Richard Attenborough, Charles Bronson, Donald Pleasence, and James Coburn escape from an inescapable Nazi POW camp in this spry and upbeat comedy/drama based on a true story — with a screenplay by James “Shogun” Clavell — for director John Sturges. Simply awesome; a must-own.

This sensual drama from Germany introduces us to Cibrâil, a young Turk working as a policeman in Berlin and living with his beautiful girlfriend. But all is not well, and the reason becomes clear when he meets her hunky male cousin. The attraction is instant, all-consuming and completely natural, but is it worth all the drama?

Stephen Dorff, Michelle Monaghan and Willem Dafoe combine talents in this somewhat artsy attempt at a crime drama. Dorff is indebted to incarcerated Defoe, so he agrees to perform a hit when released. But then he meets Monaghan on a bus. For some reason she takes him home, explaining, “We all have layers.” Skipping the double-entendre, we skip ahead to the hit going south, putting both Dorff and the girl in danger. Kinda weird but fun.