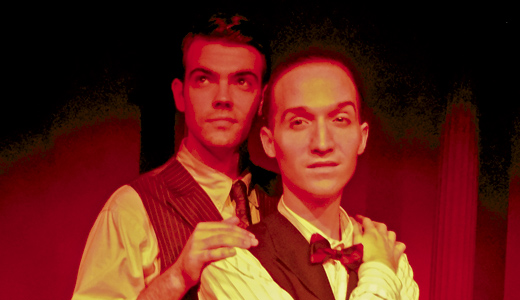 ‘Thrill Me: The Leopold & Loeb Story’
Presented by Pandora Productions. Directed by J.R. Stuart. Continues through May 19 at the Henry Clay Theater, 604 S. Third St. For tickets or info, go to pandoraprods.org or call 216-5502.

At the beginning of Pandora Productions’ staging of “Thrill Me: The Leopold & Loeb Story,” Nathan Leopold (Neill Robertson) is alone on a dark stage. He’s been imprisoned for decades and is being interviewed by an off-stage parole board (voiced by Jon Huffman and Ted Lesley). An overhead spotlight pours cold, analytical light on Leopold’s prison-pale skin. Sharp shadows reveal the contours of the skull beneath his skin, but his eyes are sunk away in pools of black shadow. It’s an image as poetic as it is chilling, and one that embodies the murky power of Stephen Dolginoff’s compelling musical retelling of the 1924 thrill-murder that captured headlines across the country and has engaged the imaginations of playwrights, novelists and filmmakers (not least Alfred Hitchcock) ever since.

Dolginoff has stripped the story to its essence. He offers just two onstage characters: Leopold and Richard Loeb (Mason Stewart) are privileged, intelligent, well-educated — and arrogant enough to think they are Nietzschean supermen who are exempt from the moral constraints that apply to lesser folks.

The handsome, athletic, impulsive and brash Richard is a compulsive thrill-seeker with an insatiable appetite for new risks. Nathan’s appetite is insatiable as well — but it’s directed at Richard, and in a series of flashback musical vignettes, we witness the two conspirators’ plan and carry out their crime even as they weave an intricate relationship built around power, lust, adoration, contempt and complementary obsessions.

The songs and text are remarkable — and remarkably delivered. Director J.R. Stuart has a choreographer’s eye for sculpting intimate moments that capture Richard’s physicality in a muscular pose or the flick of a hand, and express Nathan’s dependence in the vulnerable tilt of a head.

Robertson and Stewart bring excellent — and superbly matched — voices to the musical material. And what musical material it is! There’s nothing particularly innovative about Dolginoff’s score, but much of the story is told in the lyrics. Some of the lyrics are so outrageous they transcend comedy, as when Nathan and Richard, both law students, draft a contract that requires Nathan to support Richard’s schemes and — with the appropriate wherefores and “in consideration thereofs” — requires Richard to satisfy Nathan’s sexual needs. Other times, they’re simply riveting — as when Richard uses the lure of his fancy roadster to seduce a youngster into going for a ride. And as the police investigation of the crime ratchets up (radio alerts voiced by Scott Anthony keep the audience updated), musical director John Spencer and sound designer Laura Ellis build the tension to a fever pitch.

This is a fast-paced, provocative examination not just of a sensational crime, but of the relationships and values that fostered it. Dolginoff tells the story with minimal doses of sentimentality and moralizing, and he ends it with a clever twist.