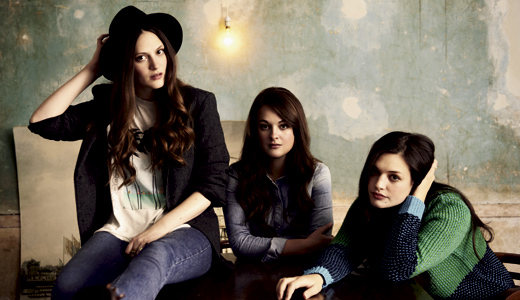 Twenty-something sisters Emily, Jessica and Camilla Staveley-Taylor have been performing together for many years, though their first record was only released in 2010. Now the trio from Watford, England, on the road promoting their first full-length album, Dead & Born & Grown, is happy to be returning to the United States.

“I don’t know if Americans will understand the thrill for British people coming over to the land you’ve grown up hearing so much about, through films and music and television programs — it’s such a big part of our culture,” Emily says. “It’s brilliant, it’s such a pleasure to come over here.”

Though they’ve yet to score a Mumford-sized hit, they’ve sung with Tom Jones and toured with Bon Iver, Josh Ritter and others, including a sold-out night opening for the Civil Wars at our Brown Theater. “One of our best friends has some family who live in Louisville, so she’s always going on about Louisville. I feel like I’ve known about Kentucky more than other states for a good few years before I ever came out to America,” Emily says.

The Brit says she especially loves the accent around here, as well as how warm and friendly the people are. “Whenever I see it on our list of tour dates, I call my friend. ‘Louisville’s brilliant! I’ve got cousins and aunties there!’”

While they are headlining most shows on this tour, their Louisville stop has them playing first in the evening at Waterfront Park. They’ve had experience performing their gentle folk songs at outdoor gigs, which she says can be difficult due to the unavoidable factors that can impact such shows — cars, weather and the like. “But then we’ve played some gigs where people are sitting down on blankets and lying down and able to completely relax in a way you cannot do in a theater or a club, and let the music wash over them. I think for an audience member, that might be a wonderful way to experience the gig.”

When the sisters are singing together in public, are they singing more to the audience or to each other?

“Well, that’s quite an interesting question, actually … I guess it is to the audience. But we always make sure that we can see ourselves. If you can’t see each other, you can get a bit locked into just singing your part,” she says. “As soon as you start focusing on yourself, rather than the thing as a whole, it kind of falls apart … I guess I would say maybe 50/50 singing to each other, but allowing other people into that.”

When they received a call asking if they’d like to sing backup for Tom Jones, “I was like, ‘Ummm, yeah!’ (The label representative) said, ‘Ethan Johns is producing it.’ We said, ‘Right, definitely then.’” Since then, Johns and his father, Glyn Johns, have come together to produce Dead & Born & Grown, the first collaboration for the father and son whose collective résumé runs from Led Zeppelin and The Who to Ryan Adams and Kings of Leon.

Family is the thing for these folkies. Their parents were a big influence. “I guess they taught us … everything, really. How to get along as sisters; they taught us to enjoy music, how to sing, how to hear a harmony — and they did that without appearing that they were teaching us anything.”

The eldest Staveley-Taylor daughter says their parents shared a joy for music as a way to be sociable and a way to express emotions — happy or sad — in a healthy way. They kept a steady diet of Simon & Garfunkel, Neil Young, Fleetwood Mac and Motown flowing in the home and sheltered their girls from the horrors of bad music.

The girls remain grateful. “By listening to it, you are able to empathize with whatever expression is going on through music … even if you’re not the one behind the music making it,” Emily says. “It’s a big release to people, I think, to hear it and have it expressed on their behalf.”

What if they had been a different family? If The Staves were the Jacksons, which one would be Michael, Jermaine and Tito?

“Oh, my god,” she laughs. “OK, I’m gonna go with Jermaine, because I think Jermaine’s awesome. I’ll claim him for myself. I’ll say Milly is Michael Jackson, and Jess can be Tito.”

WFPK Waterfront Wednesday with The Staves, The Lone Bellow and The Rev. Peyton’s Big Damn Band