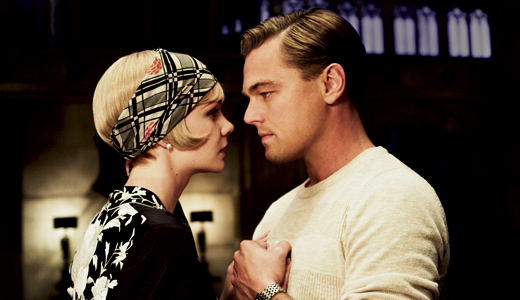 Look, it could have been so much worse. Baz Luhrmann’s film version of F. Scott Fitzgerald’s 1925 novel “The Great Gatsby” is, yes, a gaudy, grand, grotesque refurbishing of a literary masterpiece. But it’s not the total Baz-tardization (sorry) that many had feared. Indeed, it’s surprisingly faithful — to a fault. You could even call it an act of illustration: a cinematic Cliff’s Notes, with all the vulgar underlining and explanatory spotlighting that suggests. (If you thought the all-seeing symbolic eyes of Dr. T.J. Eckleburg were heavy-handed before, wait till you get a load of them here.) No, you won’t be outraged by this “Gatsby.” But you might not be moved much, either.

We know the story: Nick Carraway (Tobey Maguire), a young Yale grad working on Wall Street, rents a cottage on Long Island next to the grand estate of thirty-something mystery millionaire Jay Gatsby (Leonardo DiCaprio), who throws lavish parties at his mansion (here reimagined as a Disneyland castle, the stuff young girls’ dreams are allegedly made of) but rarely shows up at them himself. At nights Gatsby likes to reach out toward a green light on the far end of the bay — simultaneously the most poetic and awkward symbolic gesture in all of American literature.

The ultimately unattainable object of Gatsby’s affection and obsession turns out to be Daisy Buchanan (Carey Mulligan), cousin to Nick and wife to the bigoted old-money dullard Tom Buchanan (Joel Edgerton, doing his best Nick Nolte impersonation). Gatsby and Daisy had a brief, passionate romance way back when he was a penniless soldier and she a happening, wealthy debutante. Through various corrupt and criminal schemes only hinted at, Gatsby has built up all this wealth with one purpose: to impress and claim Daisy for his own.

The rest, as they say, is literary history. Luhrmann sticks to Fitzgerald’s outline, for the most part. Even his style is restrained — for the auteur of “Moulin Rouge” and “Australia,” at least. Yes, the camera swooshes along cityscapes, across bodies of water, and down the sides of skyscrapers. And yes, Gatsby’s parties are portrayed with music-video delirium — discombobulating mélanges of bathing beauties and rivers of booze and fireworks. The effect, however, is often not one of newness but of homage.

The much-ballyhooed soundtrack — anachronistic, boisterous, a contempo analogue to Jazz Age hedonism — feels curiously retro. There’s nothing here to match that electrifying moment in “Moulin Rouge” when the chorus broke into Nirvana’s “Smells Like Teen Spirit.” Even the 3-D feels understated, and not particularly well thought-out.

Narratively, Luhrmann’s enhancements are few, with varying degrees of success: In this version, Nick writes the story as a part of rehab, which adds both an extra element of self-reflection, as well as a real-life connection to the alcoholic Fitzgerald himself. More importantly, however, it allows the director to turn Fitzgerald’s actual words into key players in the story: Letters and sentences drift across the screen throughout, which makes for arresting imagery, but also adds to the film’s dutiful, let’s-not-veer-far-from-the-text-lest-we-be-lynched-by-English-teachers quality.

Luhrmann’s most major addition is both crucial and borderline fatal. Despite what you may have heard, “The Great Gatsby” is not a romance — a common mistake that has entrapped many a filmmaker over the years. It’s a story about two people who aren’t right for each other, who were never right for each other — the sad, pathetic end of a delusional quest. To turn “Gatsby” into a love story, you have to insert the romance into the story, because it’s not there in the original; once Daisy and Gatsby are reunited, Fitzgerald spends relatively few pages discussing it. Luhrmann puts the love story back in, and at times you’d think we were watching the sequel to his “Romeo + Juliet,” which also starred DiCaprio. Daisy and Gatsby frolic among trees, whisper sweet nothings, while soft pop tunes play in the background. It’s at times cute, but it harms the overall architecture. Suddenly, a story about an obsessive quest becomes just another story of love found and lost. Who the hell wants to see Ahab drag Moby Dick back to shore?

Still, the film has its pleasures. How great is it to have DiCaprio be beautiful again? It seems like decades since we’ve seen the guy crack a smile, and he clearly enjoys being dashing. Mulligan is lovely and does what she can with an impossible part. Daisy is a nothing — a symbol, a cypher — and giving her more nuance and character beats actually diminishes the part, renders her ordinary. Tom Buchanan is a real acting challenge: He has to be both a brute and a twit. Bruce Dern did it beautifully in Jack Clayton’s flawed 1974 film, mixing just the right amount of aggression and snide entitlement. Here, Edgerton does his best, but it’s only half a performance: We buy him as a football hero and a jerk, but we miss the sneering backdraft of old money so integral to the character. As Nick, Tobey Maguire suffers nobly in the expanded framing scenes. For much of the rest of the film, however, he feels like a non-factor.

One wishes, in the end, that Luhrmann had been more bold in his changes, that he’d struck out for his own territory and left Fitzgerald’s behind. Because for all its depictions of Roaring Twenties excess and madness, “Gatsby” is a surprisingly somber book. Everything in it is coming to an end. It’s a deliberately anticlimactic, reflective finale to a longer, unwritten epic story — a requiem for which Luhrmann’s pop fantasies are ill-suited.