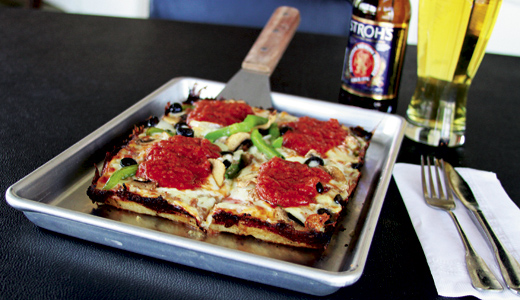 OK, let’s review the geography of pizza, nature’s most nearly perfect food. Born in Naples, Italy, it came to the United States with Italian immigrants and soon became a favorite in New York City and the urban Northeast. Like so many other things, this deliciously cheesy, tangy, salty supper on a plate went national with the Baby Boom. And as it grew, it evolved, taking on regional differences as cities made it their own.

New York City pizza didn’t tinker much with the Neapolitan original, retaining its basic premise of a thin, artisanal bread crust charred in a high-heat oven, but substituting gas, electric or coal-fired ovens for Naples’ original wood-burners, probably because it was really hard to stock your oven by chopping down the few trees that grow in Brooklyn.

Over in New Haven, Frank Pepe’s apizz’ might have looked like a NYC pie to outsiders, but locals knew better, especially when Frank left off the “mootz” cheese to create his signature seafood delight, the white-clam pie.

Chicagoans went an entirely different route, picking up a thick-crusted Sicilian pizza as base for the classic Windy City pie, a deep-dish, loaded pan pizza. St Louis innovated a square-cut thin pie topped with a bland local Velveeta variant called “Provel.” Even Louisville built its own standard form, the multi-meal delight exemplified by Impellizzeri’s, Clifton’s and Wick’s: a thin-crust pie piled high with mountains of toppings and extra cheese.

And so it went, with dozens of variations, just about all of them good. But did anybody ever hear of Detroit-style pizza? Not many people outside the gritty Michigan metropolis, apparently. But that may be changing, says the hometown Detroit Free Press, which recently trumpeted the growing national fame of Motown’s own pie.

“Unlike New York’s thin, wide, floppy pizzas and Chicago’s burly deep-dish ones, Detroit’s thick, square pies — first made at Buddy’s Rendezvous in Detroit in 1946 — have never managed to make a dent in the national consciousness,” reporter Sylvia Rector wrote on March 31. “… confined to metro Detroit, its thick but airy crusts and crunchy, cheesy, square corners remain largely unknown elsewhere. Finally, though, that seems to be changing, thanks to recent high-profile wins by Detroit-style pizzas in national and international competitions (and) the success of new Detroit-style pizzerias in other cities.”

Add Louisville as one of those cities, with the arrival in April of Loui Loui’s Authentic Detroit Style Pizza in the old Ferd Grisanti property in Jeffersontown. Ferd’s closed about five years ago, sadly, after a 25-year run; the deservedly short-lived Edesia Gardens briefly replaced it. Now it springs back to life with Loui Loui’s, which has made good use of the three comfortable rooms and inviting bar, keeping the decor simple and fresh, with Detroit sports posters here and there to make the regional link.

Loui Loui’s Facebook page declares their pie “the pizza that was born on the Detroit automotive assembly line in 1946.” It’s an interesting variation, thicker than thin-crust pizza but lacking the depth of the casserolish Chicago-style. It’s rectangular and cut in squares, made and served in shallow metal pans that — in the original form — were allegedly re-purposed from auto-parts trays acquired by workers in Detroit’s auto factories.

The base is a pure-white bread-like dough that comes out oddly reminiscent of Wonder Bread but much more tasty, baked in a bath of grease that turns the bottom into a deliciously caramelized crunchy crust surmounted by a half-inch of high-quality white bread, surmounted by an extra-thick blanket of creamy, molten cheeses, toppings over that, and dollops of tangy-sweet marinara sauce ladled over all that.

In short, even if you’re one of the haters who thinks Louisville has too much pizza already (a false assertion worth demolishing some other day), there’s room in town for a new, different style, and there’s room for more in J-Town even if you think Baxter Avenue and St. Matthews already have their share.

Loui Loui’s offers more than just Detroit’s finest. You’ll find homemade arancini ($7.99 for a trio of crunchy-fried, tangerine-size Southern Italian rice balls stuffed with cheese and prosciutto); meatballs, white bean hummus, salads, pastas and more. But you’ve got to try the pizzas, which come in four-square, eight-square or 12-square sizes (even the four-square small is plenty for two) and range in price from $9.99 for a four-square cheese pie to $22.99 plus $2.50 per topping for a 12-square giant size.

There’s full bar service, a well-chosen beer list including local brews, and a short but affordable wine list clearly chosen by someone who knows how to match pizza and vino. Our party enjoyed everything we tried, including the aforementioned arancini; pretty and well-made bruschetta ($5.95); an exceptional Caesar with a tangy-spicy dressing and black and white croutons ($4.99); and four-square Margherita ($11.49) and meat-lovers Loui Loui ($15.49) pies.

With a cooling glass of Bloomington’s Upland Wheat beer, arancini, a salad and a 4×4 big enough for two came out around $30 plus $6 tip. Loui Loui’s is open evenings only Monday-Thursday, lunch and dinner Friday-Sunday.