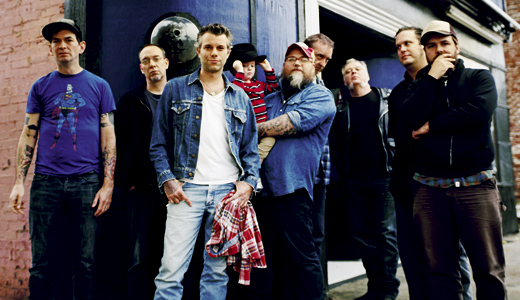 Secretariat is arguably the best racehorse of the 20th century and by far the most popular. Now, on the 40th anniversary of his Triple Crown win, the Kentucky Derby Museum and Secretariat.com present a documentary about the other half of Secretariat’s team: his jockey, Ron Turcotte. The film’s world premiere, timed perfectly to coincide with Derby week, is a celebration of Turcotte’s career; it will share his memories and tell his stories, including his 16-year career and beyond. During the premiere, the audience at Baxter will be joined by Turcotte himself, and before the movie begins, there will be a cocktail party and the opportunity to meet Turcotte and several other racing celebrities. —Natalie French

Before delving into music in 2008, Nora Jane Struthers taught English, and her love of storytelling has carried over into her new career. Her newest album, Carnival, is her sophomore effort, and this time she’s backed by the band the Party Line. Her performance will outline the best of her album, a chronicle of women through all stages of life, a truthful folk tale accompanied by her wistful, lilting vocals and all manner of banjos and fiddles. Struthers has never lost touch with her traditional roots, calling on her father’s experience as a bluegrass musician and her appreciation for rural culture. Her blend of storytelling and music is sure to cast quite a spell live. —Natalie French

Hard-drinking and hard-living heartbreakers, Lucero have honed their sound as alt-country sweethearts with a punk-rock kick over the last eight albums and 15 years. Dedicated road warriors originally hailing from Memphis, the band tours the United States (and beyond) at least 300 days a year with diverse rosters ranging from Social Distortion to the Drive-By Truckers. Their latest album, Women & Work, takes on more of a country twang than some of their previous records as the band has developed a slightly more mature and refined sound, and has learned how to incorporate a pedal steel guitar. But don’t let the mature sound sway you; 10 bucks says lead singer Ben Nichols will still be doing shots of whiskey at the bar — and on stage — when Friday night rolls around. —Kelly Kettering

‘Tragedy of Omelet: Prince of Denny’s’

Shakespeare can sometimes be a nightmare in the classroom — but it certainly lends itself to comedy, and Bottom’s Up Productions is taking full advantage. Their newest adaptation is based on “Hamlet,” affectionately dubbed “The Tragedy of Omelet: Prince of Denny’s.” Omelet’s alternate, modern reality contains much of Shakespeare’s original script but comes with a plot twist: Claudius isn’t the culprit! Colby Ballowe’s re-imagining of “Hamlet” is complete with bullies Rosencrantz and Guildenstern and mischievous, prank-savvy ghosts. Better yet, the cast boasts close ties to U of L’s theater department and consists entirely of “homegrown” Louisville talent. —Natalie French

Once again, the folks at Down & Derby want to you dance away your horseracing blues or celebrate your winnings after the big race. A fundraiser for Louisville Youth Group, this annual party features music by L.A. DJ Brynn Taylor, a performance by Roxxxy Andrews from season 5 of “RuPaul’s Drag Race,” and an open bar stocked with the likes of Tito’s vodka and Four Roses bourbon. Best of all, they don’t care what you wear — keep the Derby garb on or throw something more casual together, and prepare to leave the stress of the week on the dance floor. Chances are you’ll spend more than $40 on a bar tab elsewhere, so you might as well do something more fun for a better cause. —Sara Havens

As Kentucky Derby 139 winds down, Varanese plans to keep the party going with more eating, drinking and general merriment. The Frankfort Avenue restaurant is throwing a free late-night Derby bash that will last into the wee hours on Sunday, featuring live entertainment from Lamont Gillespie and 100 Proof, drinks specials, and a simple menu of bar bites, burgers and fries. Dubbed “Billy’s Burger Bash,” the event is named after Billy Rapaport, Emmy Award-winning field producer for NBC’s thoroughbred racing coverage; over the years, Rapaport and his media pals have been known to unwind after a long week at Churchill Downs over burgers and beers at various Louisville establishments, most recently Varanese. If they can muster up a little more energy on Derby Day, surely you can make it out for just … one … more … drink. —Sarah Kelley

The day after Derby isn’t often a pleasant one — if you didn’t pick the winning horse, you’re not only broke but broken-hearted. You have the shakes and you might feel like you’ve been trampled by a thoroughbred. No amount of sleep, vitamins or Tylenol can even touch this hangover. Might as well mosey up to the Barret Avenue corridor on Sunday for their first-ever Hungover Games, which will feature food trucks, drink specials, ping pong, prizes and contests. They’re shutting down East Kentucky Street between Brent and Barret for the festivities, and participating businesses include Regalo, Revelry, Monkey Wrench, Barret Bar, Nuts ’N’ Stuff, Meme Tech, and Artist & Craftsman Supply. If you’re used to going to Lynn’s Paradise Cafe after Derby, this is the next closest thing — literally. Re-hydrate with a mimosa or two. —Sara Havens

Supergroups rarely stick around, much less tour or continue a heavily consistent output. Well, New Orleans’ own Goatwhore have never played by the rules, and more than over a decade into their career, they are still going strong. They return once again to decimate our fair city, this time in support of last year’s critically lauded Blood for the Master. Joining them are tongue-in-cheek power-metallers 3 Inches of Blood, who exude an infectious love for all things Iron Maiden and Dio. The unholy brethren in Atlanta’s Withered also play, bringing gifts of despair and darkness. Additional support by local black filth Anagnorisis and Ohlm. —Austin Weber

A combination of dissonant pop, shoegaze and a hint of Goth, Twin Tigers has been on the radar of fans and fellow musicians alike since their 2007 origins in Athens, Ga. Descendents of Joy Division and peers of acts like Tapes ‘n Tapes and The Dodos, even member changes have not slowed this act down as they recently released 2012’s Death Wish as a follow-up to 2008’s Gray Waves and have toured nationwide with Minus the Bear and The Hold Steady. But before they embark on another impressive expedition with New York City’s Interpol this summer, you will have a rare chance to experience Twin Tigers in an intimate setting when they perform at Zanzabar Tuesday; don’t miss it. —Kelly Kettering

Artists love “happy accidents,” those fortuitous discoveries that turn out great, as if you planned it all along. Corie Neumayer and James Norton had one while readying for their two-person show. They thought they had little in common until they realized they both work in layers. Neumayer uses spray paint and stencils “to layer multiple images … that are brought together in groups that may have happened only by impulse,” she explains. Norton says his photographs “(illustrate) the deconstructive effects of memory disorders (with a) blending of past and present.” Their use of multiple layers of images and meaning constellate (collect in one place) their “discoveries, memories and ideas that seek an understanding of the unexplainable world.” PYRO Gallery plans to be open during the May 3 First Friday Trolley Hop. —Jo Anne Triplett