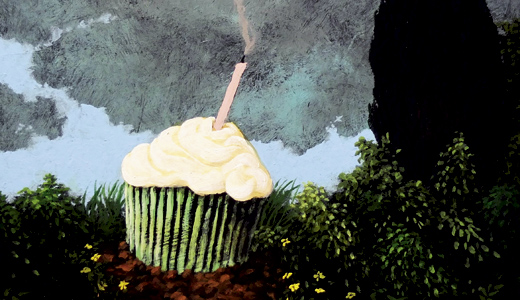 This weekend and next, The Bard’s Town Theatre is putting on Jonathan Marc Sherman’s “Things We Want,” which debuted off-Broadway in 2007 and was directed by Ethan Hawke. Sherman is best known for writing the play “Women and Wallace” as a teenager in 1988 and now has a canon of productions under his belt. “Things We Want” is about three brothers who live together as adults in the apartment they grew up in following their parents’ death. Doug Schutte, The Bard’s Town’s executive artistic director, says he was unfamiliar with the play until recently. “What a wonderfully happy accident to find it,” he says. “Fabulous dialogue, characters with grit, and a story with heart.” —Sara Havens

Eric Brace and Peter Cooper have long earned their bread and butter as music journalists. But long before they turned to print, they were musicians, absorbing the sounds of classic country and folk. After teaming up to produce the Grammy-nominated tribute I Love: Tom T. Hall’s Songs of Fox Hollow in 2011, which featured performances from the likes of Patty Griffin, Buddy Miller and Elizabeth Cook, the duo has returned to the mic with The Comeback Album. Their third release together, the record showcases their signature Everly Brothers-style harmonies and colorful storytelling, which includes scenes from jailhouses and slums with fools, sages and sailors as characters. Always a hoot together on stage — think the Everlys meet Jimmy Fallon and Justin Timberlake — their return to Uncle Slayton’s is sure to please and tickle. —Jason Howard

Louisville is lucky to have an impressive local arts scene and a thriving farm-fresh foods movement, two assets that will be celebrated Saturday at the fifth annual Buy Local Fair. Spearheaded by the Louisville Independent Business Association and Grasshoppers Distribution, the fair will include more than 150 booths showcasing goods and services from this city’s finest local artists, farmers, businesses and community organizations. And no Louisville-centric event would be complete without a hefty helping of food and drink, including a craft beer tent featuring 10 local brewers. Local bands Gideon’s Rifle, Thirty Spokes and Nerves Junior will provide entertainment to round out this much-deserved Louisville love-fest. —Sarah Kelley

Paul Kelly has been called the “Bruce Springsteen of Australia,” but truth be told, Kelly, like Bruce, transcends regional labels; he’s one of the preeminent songwriters of our time. As a lyricist, Kelly is literate (he adapted Raymond Carver’s harrowing short story “Everything’s Turning to White” into an exquisite song); idealistic (witness “From Little Things Big Things Grow,” a stirring anthem co-written with the great Aboriginal singer Kev Carmody); evocative (his moody “Gathering Storm” is a minimalist masterpiece); and witty (check out “Every Fucking City,” his funny backpacker ballad on YouTube). And his love songs are as sly as can be. Kelly’s career has fused rock, R&B, bluegrass and country, but nowadays, he prefers life as an acoustic troubadour with a guitar. For his Zanzabar show, he’ll be joined by guitarist (and nephew) Dan Kelly. —Marty Rosen

‘Fire Under the Snow’

In 1959, Buddhist monk Palden Gyatso was arrested by the Chinese Communist Army and spent the next 33 years in prison for crimes of peaceful demonstration. He was tortured, starved and sentenced to hard labor, but says his faith in Buddhism helped him survive. While imprisoned, the mere existence of the Dalai Lama inspired Gyatso, and he eventually got to meet him after he was free from Tibet. “Fire Under the Snow” documents Gyatso’s life from childhood through his imprisonment and his current role as an activist, and it will be shown Sunday as part of the Wild and Woolly Film Series at the Clifton Center. “Palden Gyatso’s life story transcends notions of religion or political movements,” says director Makoto Sasa. “He accommodated suffering but did not capitulate to it.” —Sara Havens

Emily Wells made her lively household debut at the age of 4 on a small, plastic violin purchased from Michaels. And while she has since expanded her instrumental range, she has not necessarily outgrown toy instruments — she has performed on a toy piano during her concerts. Her songs show no lack of maturity, however, and instead offer a haunting, crystalline quality, accompanied by her violins, piano and a deep, electronic beat. Her style has been described as folk and hip-hop, as intricate and humble; her newest album, Mama, was recorded entirely through voice and guitar. Wells has claimed a style that speaks to her honesty and shows off the simpler facets of life. —Natalie French

Martha Wainwright has music in the veins. Her name may sound familiar for several reasons, two of which are her father and brother: Yes, she is the sister of acclaimed singer-songwriter Rufus Wainwright, and yes, her father is Loudon Wainwright III. She hails from a long line of musicians (including mother Kate McGarrigle and aunt Anna McGarrigle) and yet has shown no struggle making a place for herself in the midst of it all. She is Martha Wainwright, passionate and dramatic, an enthusiastic performer who is full of life; her music is defined by its intensity, even its aggression — but her voice remains versatile and enchanting, a strong female lead born of a pure, intense love of music. —Natalie French

Starting a tradition is a lot of work. When the Spot5 Art Center decided to hold what they hope will be an annual show in their gallery, the first of its yearly regional juried exhibitions was born. The 18-person show enables us to see what’s happening in creative minds from Kentucky, Illinois, Indiana and Ohio. Gallery director Amy Chase says they want “to unite artists from the surrounding states and to stimulate artistic inspiration within our community. By representing all types of media, we encourage the exchange of ideas and strive to create a sense of diversity within the area.” The small gallery is displaying 37 carefully curated works, resulting in a high-quality public display of artist-to-viewer affection. Artists include Suzanne Sidebottom, Sebastian Moh and Jered Sloan. —Jo Anne Triplett

Nathan Leopold and Richard Loeb had much in common: both were child prodigies from the same wealthy Chicago neighborhood; both started law school at the University of Chicago by the age of 18; and both were obsessed with the prospect of getting away with murder. After months of planning, the duo carried out what they thought was the “perfect crime” — the kidnapping and murder of a 14-year-old boy in the spring of 1924. This chilling true crime and its aftermath is the subject of “Thrill Me,” a musical drama presented by Pandora Productions; the show examines the minds and motives of the killers, as well as their downfall as their plan unraveled. Murder, mayhem and music? Now that’s entertainment. —Sarah Kelley

We get to meet Edie, the young daughter of Gibbs Rounsavall, by way of her father’s new series “AWAKEN.” Her influence on Rounsavall’s life, as every parent (grandparent, godparent, next-door neighbor) knows, is all consuming. He’s “Dada” now, an inspired choice since it’s the name of an art movement as well as father. Good job, Edie. “When my daughter Edie was born … my everything was jolted into the stratosphere,” says Rounsavall. “Her exploration involves a sense of immediacy where everything in her line of vision and within her grasp is subject to her full attention. This series is my attempt to model this focused attention with the voice of each piece imbuing life into the next, progressing in complexity just as Edie progresses every day.” —Jo Anne Triplett

‘Days of Worry and Wonder’ by Tim Crowder

Garner Narrative is friendly and highly supportive of its artists, and after welcoming Memphis’ Tim Crowder, Joyce and Angie Reed Garner are no less excited than usual. Crowder’s paintings are surreal yet crisp, a hat tip to the famous surrealist Magritte. Crowder places a cupcake, its candle flame extinguished, in the middle of a forest field; a melting candle sits atop an old, Southern barn, larger than any tree around. The paintings are born of an intensive imagination and yet are completely absurd — they are not abstract but rather surreal. Magritte once said: “The only thing that enrages me is the mystery of the world,” and Crowder holds true to this. Perhaps there is some truth to be found amidst the surrealism of his work. —Natalie French

This month, the Gallery on Pearl welcomes Indianapolis artists Dee Schaad and Jim Viewegh, each boasting his or her own interpretation of life and art. Schaad offers the absurd and the hilarious, working with clay to build exaggerated figurines of historical figures or mythical creatures. It is satire at its finest — pointed but lighthearted, and undeniably funny. Viewegh serves as the counterweight to Schaad’s dramatic flair, instead offering the sublime, focusing on the importance of light in the world. He displays portraits and landscapes, all misty with a specific brightness, defined by their subtle contrast of light and dark. The Gallery on Pearl prides itself on bringing in “the very best art from the region,” and with Schaad and Viewegh, it’s safe to say the gallery is succeeding. —Natalie French